The second and last of the Starquest series, Star Warrior technically uses the Dunjonquest engine, but  heavily modified and offers a radically different kind of game, anticipating 1981's Crush, Crumble, and Chop! Instead of dungeon crawling, it's an open world combat sim with stealth, without any walls, but instead terrain that hinders but does not obstruct. It also has graphics and sounds.
The manual details an overwritten plot, par the course for Freeman's sci-fi games, where the peaceful citizens of planet Fornax, under the protectorate of the militaristic Stellar Union, decide they're sick of it and hire space mercenaries to route the occupying forces. The weirdest bits here are the very USA-centric aphorisms wildly misused in context ("Freedom isn't free," ruminates the Fornaxian client, meaning "we will pay you lots of money"), or make no sense in any context ("The only thing worse than taxation without representation is taxation with representation," lectures the Furies' receptionist - bet the Mises Institute would love to hear how your society functions!).
Star Warrior has two missions, set on two different maps, implied to be taking place concurrently by two different warriors. In mission 1, "Diversion," your goal is simply to create as much mayhem and destruction as possible, with forts and military bases worth more points than any other target of opportunity, and your successful extraction (based on a transport rendezvous time which you set before the mission), though not strictly required, worth a final bonus. Mission 2, "Assault," has you search for and kill the Stellar Union governor under the cover of the havoc wreaked by your counterpart. It would be neat if the game remembered your score from mission 1 and used it to adjust the heat on your Fury in mission 2 accordingly, but alas it does not. 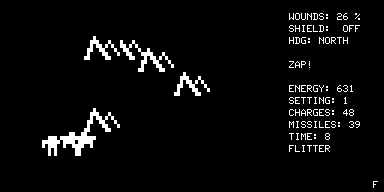 You have three weapons available and a number of other bits of gear, depending on which of three mobile suits you've selected at the start. The disk version, which I could not get running correctly at all, allows you to customize your weapons and gear, using a point-based system where each module, upgrade, and ammo count costs points and/or comes with a tradeoff, such as slower flight speed for heavier armor.
Your designated primary weapon is the powergun. As in Rescue at Rigel, power level is adjustable, and it does not inflict damage, with a successful hit either killing or not killing. Unlike Rescue at Rigel, power level does not affect lethality or energy usage. It is, essentially, a guess on how far away the enemy is. The screen dimensions correspond to 1000m across each way, and each powergun setting optimizes for a kill at 50m per level. The odds of a kill decreases hyperbolicly with distance plus error. For instance, if an enemy is 150m away, and your powergun is set to 2 (optimal for a 100m kill), then the 50m difference is added to the distance and your gun will be as effective as it would at 200m aimed perfectly. In practice, I found the powergun, even in its heavy variant, rarely killed at longer distances than 200m and allowed return fire. I found it most effective for sniping unaware enemies from cover at fairly short ranges.
The secondary weapon is the blaster, which I found quite effective at long ranges, but not worth using unless I was leaving an area and wanted to take out a target on my way, because it is loud and brings heat down on you hard. You don't need any help looking for trouble in mission 1 - you'll encounter plenty of it while searching for high value forts and bases - and when you find them you really don't want them to spot you too soon or to call for backup.
Finally you have nuclear missiles, which first prompt you to enter an azimuth, and then a range of detonation. Aiming is done in 45 degree increments, and range goes from 110m to 300m. These are the only weapons that can take out forts and bases, but the blast radius can also destroy mobile targets. It's very similar to the missiles seen in Starfleet Orion. These are probably the best overall weapon, though the strict 8-way firing lines are more limiting than your other weapons, and estimating range can be difficult, but unlike the powergun you at least get an explosion to tell you how good or bad your guess was.
Annoyingly, the only way to tell if you took out a base or not is to scan it, which rarely works unless you're fairly close by, and even then may take multiple turns, allowing reinforcements. If it stops firing on you, maybe it just doesn't see you any more. If you get fired on, maybe it's coming from an unseen reinforcement.
The three suits are:

Energy is limited, but in practice, and very much unlike Rescue at Rigel, here I couldn't run out even if I tried. On the hardest settings I just don't live long enough to run out, and otherwise with a 20-30 minute mission I find myself being recalled to the transport with plenty of energy left. It's probably a good idea to have your shields on most of the time, as enemies may be present but unseen. And sometimes they see you first.

I couldn't really find a good strategy for consistently performing well or winning. There are some interesting stealth mechanics in play, but there's so little feedback that when you get seen, it's impossible to know if you made a mistake, or if you just had bad luck, and therefore have little incentive to approve. I preferred the Dragoon for mission 1 and the Ninja for mission 3, but even in my heavily armored and shielded Dragoon, damage taken was wildly inconsistent. Sometimes I'd take 6% damage from a hit, sometimes I'd take 60% instantly. You can heal, but it's very, very slow - about 1% per turn, during which enemies may just spot you even if you're in a hiding place and invisible, leading to a cycle of hurt where you never quite finish repairing your damaged subsystems or getting your health back up to a reasonable level. As a Ninja, not being seen is paramount, as there's no such thing as getting a light scratch even with shields on, but this too is subject to luck and skill, and there's no way to know which one failed you when you get spotted.

For what it's worth, I managed to win the second mission and extract successfully on the second-highest difficulty level, but doubt I could repeat this consistently. 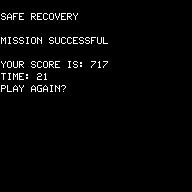 GAB rating: Below Average. This may not be entirely fair, as I don't really "get" this game. Maybe with a more thorough understanding, it becomes a tactically sound game of skill. But I wish there was more transparency in how things work, and didn't have enough fun to spend more time figuring it out. For instance, is it better to inch your way through difficult terrain, giving enemies more time to spot you, or is it better to use your jump jets or flight to go through it quickly, giving them much less time, but higher chances of spotting you (if not also of hitting you) on any given turn? Neither strategy worked consistently, and it just frustrated me.

In Star Warrior's defense, the engine does seem to be quite a bit improved. The horribly long wall drawing routines that characterized earlier Dunjonquest games is gone here - no walls to render, after all - and the numerous sprites representing you, your enemies, and the terrain all draw relatively quickly, making movement itself significantly zippier than ever. At times it's a bit too fast, and often I inadvertently skipped a turn simply because I didn't press a button fast enough. But it also never dropped inputs, as far as I can tell, which was a constant problem in earlier games, especially Rescue at Rigel.

The next two upcoming games, unfortunately, will not benefit from these engine improvements, as they take the form of expansion packs and contain no coding of their own. Upper Reaches of Apshai in particular, based on the flawed, buggy, and incomplete feeling Temple of Apshai, gives me a bit of dread.