Dunjonquest meets Starfleet Orion, sort of. For all intents and purposes, this is another Microquest - a single-run dungeon crawler with a fixed character and no opportunity for development.

You are Sudden Smith, a character introduced in Starfleet Orion as one of the fighter pilots in its ultimate scenario, and presented here as a Buck Rogers pastiche. For reasons not very well explained, an insectoid species called the "Tollah" have taken ten human colonists hostage and whisked them to a secret moonbase in the Rigel system. Beaming in and armed to the teeth, you have 60 minutes to explore the base and rescue as many hostages as you can and beam out before your transport leaves.

It's basically Datestones of Ryn, but bigger and with some much-needed combat depth. Not a lot, mind you, this is still a 16KB TRS-80 BASIC game and it hardly transcends the system's limits, but it's nice to have some options, which include:

The first thing I did was to map out the Tollah moonbase. There are 61 rooms spread over six floors, and to have a chance of rescuing all of the prisoners in just 60 minutes, you absolutely must have a traveling salesman plan to check each room with minimal backtracking. Prisoner locations are semi-randomized; there are 18 rooms where they may appear, and ten are randomly populated each game. Enemy locations are also randomized, but some rooms are more likely to spawn specific enemies, e.g. Commons almost always have Common Tollah, and Sanctums often have High Tollah or their pet Cerbanths.

Floor 1, the top of the base, consists only of a vestibule and a dropshaft that can be taken to any of the larger floors below, but you haven't got enough time to methodically explore each floor in descending order by using the dropshaft. Walking to the dropshaft back across the entire level would simply waste far too much time. There's also a "liftshaft" that goes from floors 6 to 3, but no higher, and with smart use of both shafts, you could probably explore most of the ship rather efficiently. Your main method of interfloor transportation, though, will likely be the base's network of one-way teleporters, which are in fixed locations but indistinguishable from doors, making it all the more crucial to have a map. 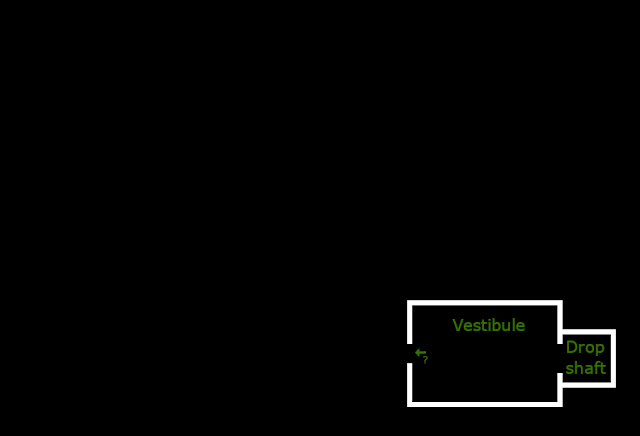 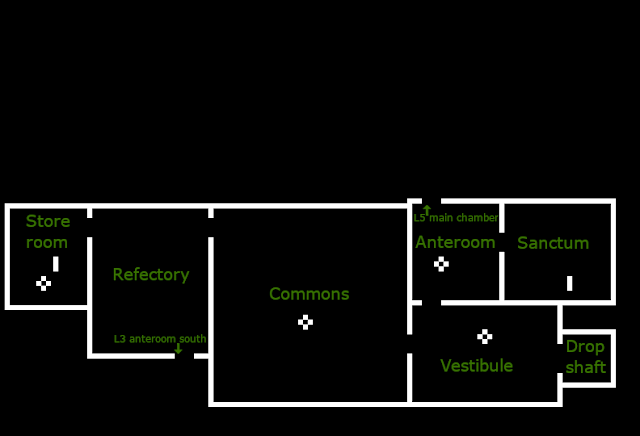 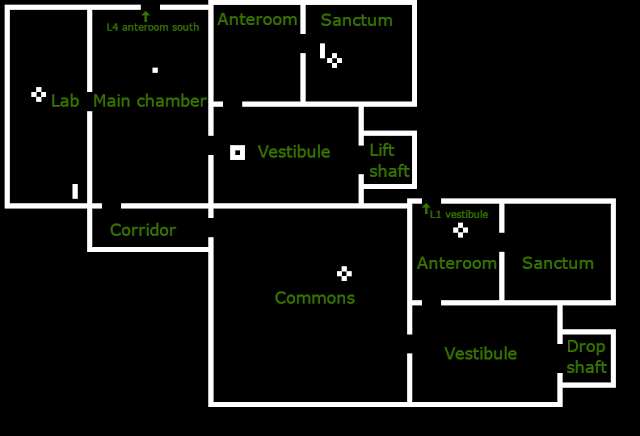 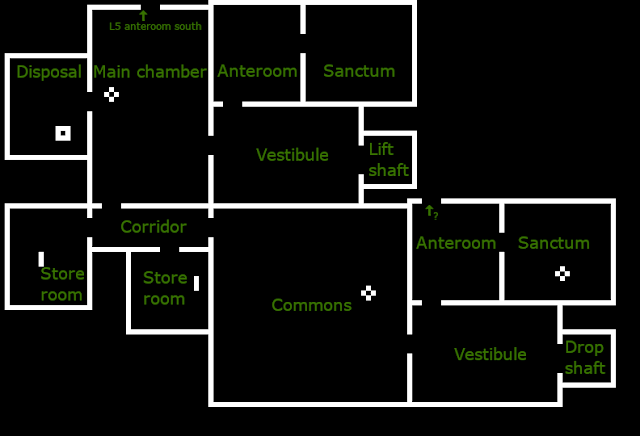 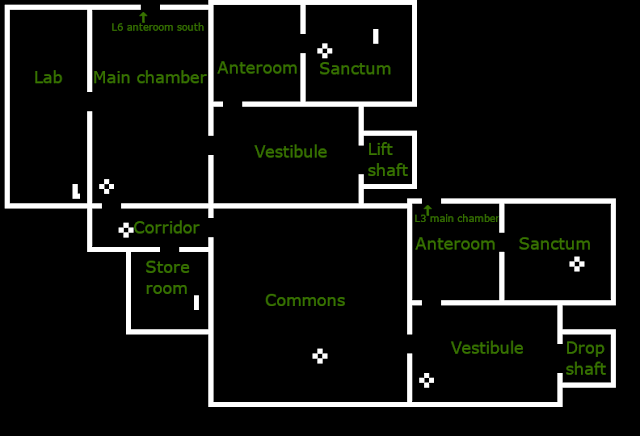 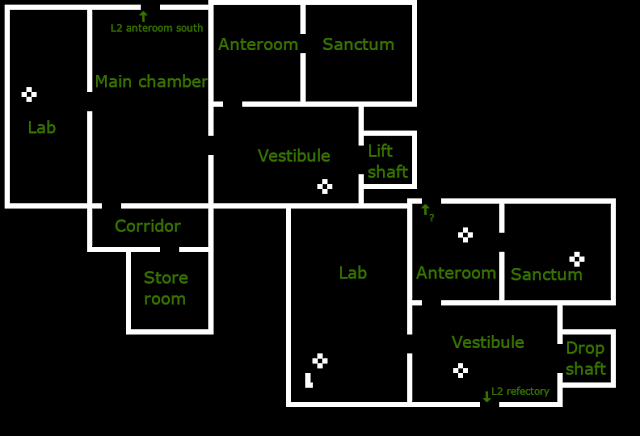 A cruel aspect here is that the sixth level is partitioned into two sectors, and the northwest sector can only be accessed by one of three mystery teleporters, which take you to one of three random locations. I have always found two or three prisoners in this sector, including Smith's friend Delilah Rookh, who is worth more points than any other. The starting vestibule has one of these random teleporters to its west, so you should always start a game by taking it.

These teleporters' destinations are randomly selected per use:

If you arrive in the refectory, then you may as well check out the connected store room, a possible hostage location, then teleport to the level 3 anteroom, check out the sanctum here, and teleport back to the start and try again. If it takes you to a main chamber, you can exit to the east, and if it's a lab, you're on level 6. If it's a disposal unit, you're on level 4, and may as well explore the whole level before taking the south anteroom teleporter. If you wind up going to the same place twice without landing on level 6, then you're screwed and may as well restart.

There are a number of enemy types, and each has three stats which are invisible to you and unexplained, but nevertheless important. These stats, whose names I made up, are Armor, HP, and Servility.

Your powergun's chances of killing on a successful hit are (Power - Armor)/HP. The Tollah, who have 1 armor and 6 HP, will therefore always be killed by a level 7 shot. Note that these odds don't consider the chances of missing your target entirely, which is a complex formula of its own totally independent of your gun's power level.

Odds of a successful negotiation are (8.4% * Servility). Because negotiation isn't fatiguing, it's a good idea to turn on AMBLE mode so that you can attempt it twice per turn.

Enemies you may encounter include:

In a few days of attempts, I managed to just barely rescue all ten hostages on the hardest setting. Here, you get 200 units of energy, which means you most certainly can't run around blasting everything in sight with your powergun. When you must, it's best to use level 7 for a guaranteed kill against Tollah, and 9 for anything more powerful. Anything less and it will fail to kill just often enough to make spending the extra energy point worth it.

Before leaving a room where I wasn't under pressure, I would rest to near 100% stamina if possible, and also turn on AMBLE. This maximized my mobility upon entering the next room. I would also heal even slight injuries. Even though you only get two medical kits and it may seem like a waste to use one at 80% health, combat performance suffers when you're hurt, making it more likely that you get hurt even worse.

I uploaded a recording of my victory to Youtube. I don't expect anyone will watch it, but the option is there.


GAB rating: Below Average. This might be the best Microquest-type game yet, but that isn't saying very much. Datestones of Ryn was the worst of them, and Rescue at Rigel follows very close in its footsteps, improving on many of its inadequacies, but still bound by its limitations, offering no character growth, not even the gear upgrades found in Tower of Morloc. The "dungeon" is big, more interesting, and although the rooms aren't unique, the room types at least have corresponding manual paragraphs describing the sights and sounds, and offer distinct gameplay characteristics. Tactical combat is the best in a Dunjonquest game yet, though still extremely reliant on luck.

Bad luck is more punishing than bad decisions, and there are so many ways that a roll of the dice can screw you over. You only get two heals on the hardest setting, and after using both, you're circling the drain, getting worse at combat and more irreversibly exhausted with each hit you take until you're dead. Miss a High Tollah at close range? You're probably going to eat a blaster bolt and have to use a heal. Try to dodge-roll? There's still a chance of getting hit. Shields up? You might take a big chunk of damage anyway. The amount of health restored by one pack is random and is sometimes so poor that you have to use your second right away. Sometimes enemies just don't stop spawning. Sometimes teleporting hostages out works right away, and sometimes it takes more than ten tries, draining your precious power and giving enemies more chances to come in and hurt you. Sometimes an enemy teleports in right next to you when you've already buffered your next input, all but ensuring you take a hit from them, and probably curse TRS BASIC for being so laggy.

All that said, damned if the last minute of my successful play didn't get my heart racing, in which, being exhausted, badly wounded, and having barely any energy left for my gun or teleporter, I blasted a High Tollah scientist, and beamed out the hostage he was using as an alien guinea pig as his pet cerbanth entered, hearing the noise. As I hailed the transport to teleport myself out, it failed, and the cerbanth got closer. I set my powergun to maximum level, only to realize that this would deplete my own reserves completely, leaving me stranded. I dodge-rolled out of the cerbanth's way, took a nearly fatal bite, and fired my last blaster shot behind me, blowing it to bits. I then teleported out successfully, just as another High Tollah entered the fracas.