Talk about a turnaround. Right after churning out a baker’s dozen worth of underperforming mediocrity, Universal produced the very decent Pac-Man inspired Lady Bug, and the next year released Mr. Do!, a brilliantly insane Dig Dug derivative, which would be hands-down their greatest video game hit.

Before playing the more familiar version of Mr. Do, I tried out an earlier version featuring a pitchfork-wielding snowman character. Sources are conflicted on whether this is the Japanese version or a prototype – either way, the only gameplay difference I could tell is that this early version lacks gobblers (more on those later), which makes it a lot easier to bag valuable alpha monsters (also more on those later). The snowman does have a neat head-asploding death animation.

The OG snowman still appears in the final version of the game, on the title screen when you insert tokens. 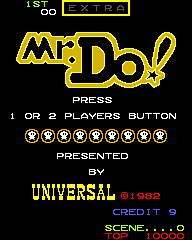 At first glance, Mr. Do! doesn’t look much different from Dig Dug. You’re a clown instead of whatever the hell Dig Dug is, you drop apples on the heads of dinosaurs instead of dropping boulders on the heads of dragons and whatever the hell a Pooka is, you throw a SuperBall at enemies instead of bursting their innards with a bike pump, you collect snacky cakes instead of vegetables, etc. You’re likely to notice the bunches of cherries you can collect as an alternate means of finishing the stage, as if Dig Dug merged with Pac-Man, which if collected in an uninterrupted sequence play a do-re-mi scale and award 500 bonus points. Before long you’ll also discover that enemies can easily outrun Mr. Do, and finding ways to cope undoubtedly gives this a steep learning curve.

Ultimately, Mr. Do is faster, more chaotic, and more challenging than any of its immediate sources, but also more varied, strategically deeper, and, I find, more fun.

At the crux of the differences between Mr. Do and Dig Dug are the primary weapons. Mr. Do’s ball is much more powerful than Dig Dug’s bike pump – it kills instantly, has unlimited range and navigates tunnels on its own, but also has a cooldown which gets subsequently longer each time you successfully kill a dinosaur with it, and it can be difficult to predict where the ball will wind up going if you throw it down branches or diagonal tunnels. You can become helpless if you rely on the ball too much, or if it bounces somewhere unexpected.

The escalating delay, though, combined with the dinosaurs' quick gait, is what really means you can't rely on just the SuperBall to carry you through a level, as a novice Dig Dug player using low risk, low reward playing style could rely exclusively on the bike pump to last a reasonably long time. After you've killed three or more enemies with the ball, it will take a dangerously long time to reappear in your hands, leaving you defenseless against any enemies that get close to you. Even if you're just going for the cherries, that means walking around the entire level and probably having to kill most of the dinosaurs in the process. You'll need to kill with the apples, and the more you can take out with a single drop, the better.

There's an incredibly useful apple technique, which feels exploitative, but it's used during the attract mode. By digging a tunnel one tile's distance underneath an apple, letting it fall behind you, and then pushing it back just a few pixels into an overhang, you'll block enemies from pursuing. They'll tend to get stuck under the apple, their pathfinding routine completely broken, and when several have gathered you can push it all the way, crushing them and making your life easier.

It's not a perfectly reliable trick. Sometimes the enemies will wander away seeking another path, and if an enemy can't figure out a way to reach you, it will eventually get angry and start digging its own path, which can take a distressingly short amount of time on later levels. That said, once I had figured out how to use this trick, my average play times almost instantly doubled, and my scores tripled.

There there's the alpha monsters, who really push this game's risk/reward factor through the roof. Like in Lady Bug, you'll be rewarded with an extra life if you can spell EXTRA, and instantly finish the level to boot. This time, instead of collecting coins, these Teletubby-like creatures with letters on their torsos will spawn at the top of the screen, awarding you the letter on a successful kill. You want those letters, even if you have to go out of your way to collect them, and you can make them spawn in one of two ways.

The second method is perhaps the more interesting one. When all of the dinosaurs have spawned, they'll leave behind a piece of junk food in their lair, much like Lady Bug's beetles and their vegetables. Collecting it freezes the dinosaurs in place and spawns an alpha monster following a conga line of "gobblers" which remind me of cookie monster.

Gobblers eat any apples in their way, even mid-fall, making it risky to try to crush them. Killing the alpha monster transforms all of the gobblers into short-lived apples and unfreezes the dinosaurs - be careful that you don't kill the alpha monster when you're in a vulnerable spot. Also note that you can't spawn a second alpha monster by collecting the junk food when there's already one on the screen - this just spawns gobblers - and if collecting it takes you past the 5,000 multiple point mark, you waste that alpha monster spawn chance.

The attract mode also shows that dropping apples will sometimes leave behind diamonds, worth 8,000 points and a free game, but in nearly eight hours of play, I never saw that happen once.

This one took some time to appreciate - there's so much going on that it can feel overwhelming and unfocused, and made me long for the relative simplicity of Dig Dug. But with practice, I came to enjoy the manic, unforgiving gameplay, the variety, and the thrill of seeing an awesome sequence of events unfold to my benefit, whether because of skill, strategy, or sheer dumb luck. Mr. Do is a great golden age arcade classic, and I award it a harpoon.
Email ThisBlogThis!Share to TwitterShare to FacebookShare to Pinterest
Labels: Universal