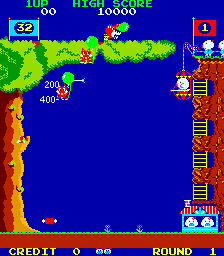 Pooyan could be seen as an early “cute’em up” – a distinctly Japanese sub-category of the shmupoid clade, to which Konami is no small contributor. It plays differently enough from Space Invaders that it would be unfair to accuse it of being a reskin, but it’s the same kind of game at its core – a sow protects her piglets from a pack of wolves by shooting them with her bow and arrows.

Frankly, I think domestic pigs are already cute enough without being infantilized, and Konami’s depictive style here unpleasantly reminds me of Peppa Pig.

In the first stage, wolves drop down from above using balloons to slow their descent, while you are raised and lowered on a winch to help aim at their balloons. They’ll throw rocks at you which block your shots and kill if they hit you dead-on, and also occasionally raise their arrow-deflecting shields. The winch-operating piglets will sometimes dispense a hunk of meat, which is thrown in a parabola in lieu of your straight-firing arrows. Contrary to expectations, the meat doesn’t satiate the wolves, but kills them - I suppose the wolves involuntarily let go of their balloons in a futile attempt to grab it. The meat passes right through shields, and can take down as many as five wolves in one toss with good timing.

Should a wolf reach the bottom, a piglet gets snatched, and the wolf permanently perches itself on a ladder segment, making your life more difficult as that segment is now denied to you unless you time your maneuvering to avoid the wolf’s jaws. This is a sort of “bad feedback loop” that I’ve criticized other games for, where missed shots increase the difficulty leading to more missed shots until you pretty much drown, which is certain to happen on later loops. 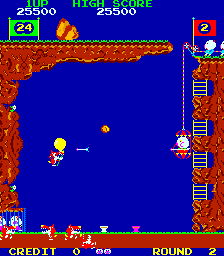 Stage two has the wolves float to the top of the screen, where if too many gather, they’ll push the boulder onto your head. Even though there’s no feedback loop – you’ll have free reign of the ladderspace no matter how much you miss – this is probably more difficult than the first stage, because the balloons often take multiple hits, and the air pumps below will also dispense empty balloons to block your shots. They'll even block meat sometimes. Then there’s the pink alpha wolf, who always appears last, absorbs an unfair number of shots, and will reinforce the pack with more wolves if he makes it to the top, including another alpha wolf.

The loop ends with one of two types of bonus round, where there’s no risk of being killed. In one type of bonus round, you have access to unlimited meat, and try to kill the entire pack of wolves in as few shots as possible. In another, they toss fruit at you, which you try to hit with your arrows. I didn’t find either one terribly difficult.

My best attempt lasted 15 minutes and scored over 190,000 points. Either I’m getting better at these games, or they’re getting easier. Replaying the first two easy stages got really boring, so I cut them out of the video to shorten the runtime.

GAB rating: Average. It works, but other games have built upon the Space Invaders formula in more interesting ways.
Email ThisBlogThis!Share to TwitterShare to FacebookShare to Pinterest
Labels: Konami