Once again, Universal ripped off a successful formula, though for once it isn’t a space game. 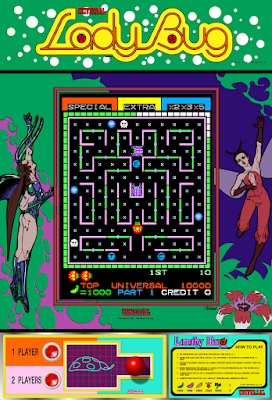 Surprise! After that poor showing last week, this game’s pretty good, and stands out from its source material once you look past the surface.

The biggest addition to the Pac-Man formula here is the revolving doors, which are barriers for the beetles but rotate 90 degrees when you enter them. Data East’s Lock ‘n’ Chase and Exidy’s Mouse Trap also had maze manipulation mechanics, but this is the best one of them all, and lends itself well to strategic gameplay. The beetles are random and stupid compared to the Pac-Man monsters, but there aren’t any power pills just lying around – just some skull tokens that will neutralize a beetle (or ladybug) that wanders onto it, and in later levels they can outrun you. You will need to make smart use of the doors to keep the beetles away from yourself and from the places you want to be.

The beetles spawn gradually, on a visible timer, and it’s quite possible to clear the earlier mazes before all four leave their home. When they do, though, a vegetable is left unguarded. Collecting it scores big points and also freezes the beetles in place for far too short a duration. Given how randomly the beetles move, they tend to converge near the center of the screen, making the vegetable very dangerous to grab. It doesn’t even make you invulnerable, and you can screw yourself if a stalker traps you in its alcove.

An important scoring element, which seems to be somewhat pinball-inspired, is the six colored tokens that start on each board, three with letters, and three with hearts. The tokens cycle through three colors with corresponding values; red for half a second (800 points), green for 2 ½ seconds (300 points), and blue for seven seconds (100 points). Collecting a heart while it’s blue will raise a multiplier up to a maximum value of 5x, which applies to all tokens and dots, but sadly not to vegetables. In addition, collecting the letters EXTRA while green awards a bonus life and completes the level, and collecting the letters SPECIAL while red awards a wedding ceremony scene and a free credit.

For a decent score, you want to get the hearts as soon as possible, and definitely while they’re blue, to raise your multiplier to 5x before getting any of the letters. Hypothetically, the optimal scoring method is to collect the letters needed to spell EXTRA while they’re green, and collecting the rest (including duplicate EXTRA letters) while they’re red, but it is incredibly difficult to reliably snatch up the letters during the split-second of being red unless you camp by them and wait, which gives the beetles time to spawn and overwhelm you. I found it easier and in the long run better for my score to eat up dots nearby said letters and go for them when they change color, usually settling for green. I wasn’t concerned about spelling SPECIAL; it’s an uncommon occurrence that you even get all those letters in a game, and the free credit doesn’t help your score anyway.

GAB rating: Good. Uncharacteristically good for Universal, and the only Pac-Man clone, apart from Ms. Pac-Man, to give the original a run for its money.
Email ThisBlogThis!Share to TwitterShare to FacebookShare to Pinterest
Labels: Universal