The next game on the whaling log is Castle Wolfenstein, designed at Muse Software by Silas Warner, whose earliest game credits were on PLATO, when it came to Indiana University in 1972. I’ve already covered his oldest extant game, Conquest, an early variant of Empire, which originated as an RTS-like game. Conquest may well be the only record of that early iteration.

Warner was among the earliest adopters of the Apple II computer when it was released in 1977. In 1978, he, along with two friends that he met while employed by CDC, founded Muse Software as an Apple II developer and distributer. Warner’s debut title for Muse was a simple 16KB BASIC title (as so many early personal computer games were) called Maze Game. A few months later, he released an expanded version called Escape! 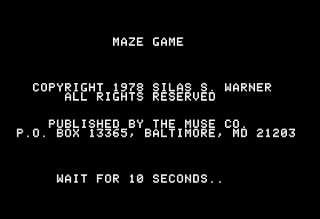 This game requires paddle controllers to play. I used my Atari paddles, but if you’re playing and don’t have any, you may want to bind an analog joystick to the paddle inputs. Go to File->Show Tab Menu->Input (this machine) to access this.

After the title screen, Maze Game lets you adjust some game parameters. The most important one being the maze size, which can be anywhere from 3x3 to 18x18, but also lets you enable or disable some difficulty-affecting options. 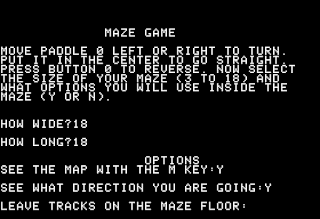 Regardless of what options you pick, the maze is then generated for you on the screen. A big maze can take a few minutes. 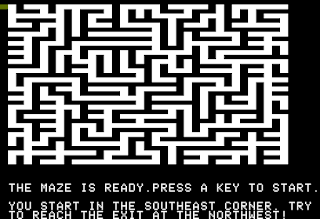 Then you’re dropped into the maze and given a 3D view.

I imagine that the 3D perspective here must have been influenced by the wireframe view we’ve seen before in PLATO games. Here, however, not only do we get solidly colored walls, but we actually get smooth forward movement that simulates walking forward one step at a time, or at least we get movement about as smooth as we can expect 40x40 graphics to look. Reportedly, Richard Garriott was influenced by this game to give Akalabeth a 3D perspective, but it’s interesting that his approach wound up more closely resembling the wireframe grid-movement PLATO games that he likely never saw.

The paddle controls are stupid, but they work. By default, MAME binds these to the mouse, which won’t work all that well, so I’d suggest you rebind to an analog joystick (or use actual paddles). In the maze, you automatically move forward. If the paddle is turned left, then you will take any left-turn passages. If turned right, then you will take any right-turn passages. And if it’s in a neutral position, then you won’t take any turns. Therefore, when you see an upcoming turn that you want to take, you have to turn the paddle in that direction before reaching the intersection. And you can turn 180 degrees by pressing the button on the paddle. This is probably the best control scheme possible for this game with paddles, but keyboard controls would have been more logical.

There’s really not that much more I can say about the game. Having the map visible at the start makes it kind of easy, though, and I’m surprised Warner didn’t have an option to hide it from you. Once I mastered the controls, I restarted and set everything to be as difficult as possible, while recording it. Actual gameplay starts at 5:40, and it took me about five minutes to solve the maze.

This game has some nice cassette cover art with instructions on its reverse. 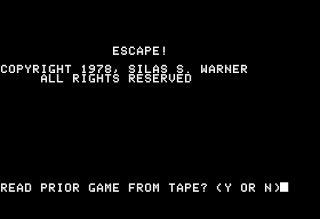 I couldn't get saving and loading to work as intended via the cassette drive, and save states just made MAME crash. Not a huge deal; one can reasonably finish this game in a sitting.

Unlike Maze Game, Escape! gives you no options. Instead, an unseen abettor gives you some tips. 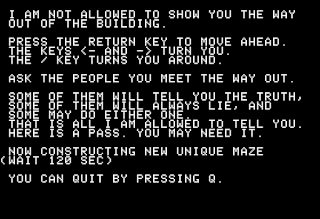 Then once the maze is built, we’re dumped into the 3D view. 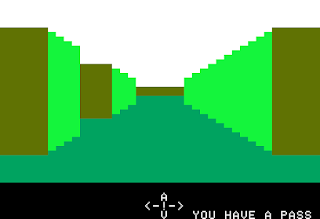 Controls are now keyboard-based, and better for it. Enter moves you forward one grid-square’s distance, but the transition is still the smooth, step-by-step animation seen in Maze Game.

I started exploring the maze, mapping out my surroundings.

At random moments, creepy looking people will show up. 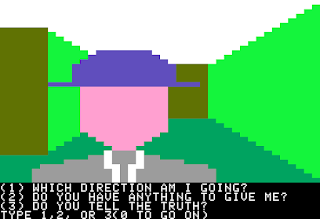 Our abettor warned us that he might be a truther (is there a better word for one who never lies?), a liar, or a sometimes-liar.

Each question may only be asked once. Question 3 may provoke the following responses:

I asked question 3 first, and he said “sometimes,” which rules out the possibility of him being a truther. You can't ask the same question twice. He said I’m heading east, and I had no idea if this was true or not. Lastly, he offered me a pass, claiming it was good, which I declined, not trusting him.

Another, who claimed he always lied, offered me a map, which I accepted. It could either be correct, or it could be reversed top-to-bottom, and either way, it would be useful. 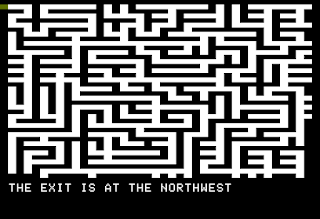 From this map, I concluded that I was in the bottom-right corner, that the map I was given was inverted, and that the very top row of cells was omitted from the map. I plotted my escape route.

Soon, I encountered a guard who took my pass. 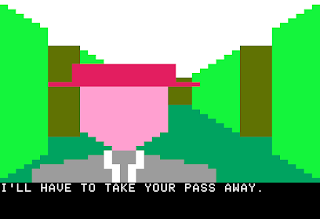 Another encounter said “I always tell the truth” and “You are facing north” (I was). He offered me a new pass, claiming guards would accept it, which I decided to take. I couldn’t rule out the possibility that he he sometimes lied, but odds were he was telling the truth, and besides, having a bad pass was no worse than having no pass at all.

At an intersection ahead, another guard took my pass. The next few encounters all either offered me bad compasses or nothing, and eventually I encountered another guard, who spared me, and even gave me a free pass. 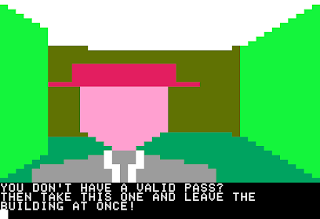 I kept moving toward the exit, ignoring the random people who had nothing I wanted. The next guard I encountered confiscated my pass, and just as I was near the exit, a final guard wasn’t so kind.

Then the game crashed. 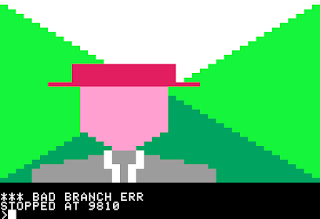 No big deal. Typing “RUN” will restart the game, and at this point I had a pretty good idea how the game worked.

I tried again, and once again, was able to pinpoint my position on the first map I received, which was correct this time. I had once again started in the lower-right corner, facing north, and executed my escape route.

The only challenge was determining whether to accept passes from random people or not. It was really just a question of probability – my starting pass was guaranteed legit, so it would be stupid to replace it, but it didn’t last very long. And once it was taken away, even a dodgy pass would be better than none, so it made sense to accept even when it seemed fishy. The only difficult question would be when to replace a pass, and then it was just a question of determining which person seemed more trustworthy. If a guy said “I always tell the truth” and also correctly told me which direction he was facing, then I figured (making several assumptions about how the game works) an 80% chance he was a truther, and a 10% chance that he was a sometimes-liar but would tell the truth about the pass anyway.

Alas, a few steps from the end, I was caught passless again.

A third attempt in, I explored for a fairly long time, never receiving any gifts except for a bad compass, and eventually got arrested without a pass.

On my fourth attempt, I once again got a map before too long had passed, and once again located my position, again in the lower-right of it, but got arrested shortly after without a pass.

The fifth attempt was successful. As before, I was offered a map and determined I was on the lower-right. The path to the exit wasn’t terribly long. I encountered many people, but ignored them all – I needed nothing. About 75% of the way toward the exit, a guard took my pass, and a few steps later, another one showed up but spared me (and gave me a new pass).

I made it out without any further hassle. 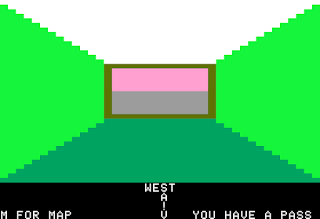 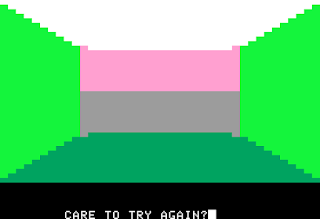 These are, frankly, rather poor games. Maze Game is fine for what it is, but it isn’t much. The smoothly-moving 3D perspective and surprisingly good controls on the ill-suiting paddles are the only things even slightly interesting about it.

Escape! tries to add some much-needed depth, but the concepts are kind of half-baked. As far as I can tell, you always start in the southeast of the map and always start facing north, making it rather easy to find your way out once you get a map, inverted or not. The knights-and-knaves logic puzzle element is deeper than what meets the eye – it’s really a Monty Hall probability problem in disguise – but most of the time the random people are just interruptions who aren’t offering anything you’d want to take.

And ultimately, success or failure is too dependent on a luck factor that you have no way to influence or respond to. Luck isn’t always a bad thing – games like Tetris would be pretty boring without randomness - but if Escape! throws two guards at you in a row without giving you a chance to get a pass in between them, and the second guard isn’t feeling merciful, then you lose, and there’s nothing you can do to affect these odds except to finish the maze as quickly as possible. Even with perfect play, your speed is still going to depend heavily on the maze layout and on how soon you are offered a map, which are both purely random occurrences.
Email ThisBlogThis!Share to TwitterShare to FacebookShare to Pinterest
Labels: Muse Software