Game 102: B-1 Nuclear Bomber and the road to Galaxy

Avalon Hill, the most iconic wargame producer of all time, has a curious role in computer game history as it pertains to Data Driven Gamer. In the early 80’s, they published a number of computer wargames under its Microcomputer Games label, including Telengard, which I’ve covered early on in this blog. Nowadays we wouldn’t think of Telengard as a wargame, but in 1982 the wargaming roots of RPGs weren’t such a distant memory. Gary Gygax had even (unsuccessfully) pitched Dungeons & Dragons to Avalon Hill at one point.

Unusually, very few of their games are “Avalon Hill originals,” but were mostly licensed distribution deals of single-author games that they discovered. Telengard, for instance, underwent continuous development from 1978 to 1981 by Daniel Lawrence, starting as an 8KB PET game, and was expanded to 32KB and ported to the Apple II and TRS-80 before Avalon Hill took any notice. It’s impossible to know if there are any real differences between Lawrence’s 1981 versions and Avalon Hill’s 1982 versions, or if Avalon Hill contributed any code to it, but from what I've seen, altering games directly wasn't their style.

This creates a puzzling challenge for my chronological approach. Do I go by the years that the games were originally released, or the years when Avalon Hill published them? The earliest game, for instance, which would become an Avalon Hill title, is Chris Crawford’s Tanktics, which he originally demonstrated at a wargaming convention in 1976. But Avalon Hill’s release wasn’t until 1981!

Apart from Telengard, the only whale by Avalon Hill is a 1981 space wargame called Galaxy. According to its designer Tom Cleaver, he had originally created a game called Galactic Empires for the Apple II in Integer BASIC, and in late 1979 had re-written it in Applesoft BASIC. Avalon Hill was impressed with this version and commissioned another re-write, and in 1981 would produce ports to the major platforms of the day under Cleaver’s supervision.

The same year, as mentioned, Avalon Hill published Tanktics, a WWII strategy game that feels very much like one they might have created as a board game, but didn’t. It came with a foldable map board and armor tokens, which were required for play, as the computer game had no graphics and used coordinate notation to indicate hex positions on the board. Previously in 1978, Crawford had self-published his previous version and distributed it in Ziploc bags with paper maps. Before that, he had demonstrated his first version, Wargy I, at a wargaming convention in 1976. Avalon Hill's 1981 re-releases, on Commodore PET, Apple II, Atari 400, and TRS-80 computers, are all that still exist today of this game.

One of Avalon Hill’s releases of 1980, their first year of publishing computer games, is Midway Campaign. There doesn’t seem to be a lot known about its development, and there isn’t even a credited designer – the manual credits a mysterious “National Microcomputer Associates,” but it’s one of the more well-known early titles by the company, so I am covering it.

Three other 1980 releases, B-1 Nuclear Bomber, North Atlantic Convoy Raider, and Nukewar, do have a credited designer, Gary Bedrosian. According to Mobygames, he independently created all three games originally in 1978, on a microcomputer by North Star. His fourth game, a text adventure Lords of Karma, would later also be published by Avalon Hill, in 1981. Once again, the originals likely do not exist anymore, and information is scarce. I don’t even know where Mobygames’ source for the North Star releases is (and let me know if you do!). I’ve chosen to play B-1 Nuclear Bomber, as it has the most Mobygames votes of the four.

Given that I am able to treat Galactic Empires and Avalon Hill’s Galaxy as different games, and that Avalon Hill’s Tanktics is almost certainly a different game from its 1976 incarnation, I’ve decided to go by Avalon Hill’s release dates, which is a departure from how I usually do it (I treated Telengard, for instance, as a 1978 title, and considered pedit5/dnd/DND to be its ancestors).

And so, my road to Galaxy looks like this: 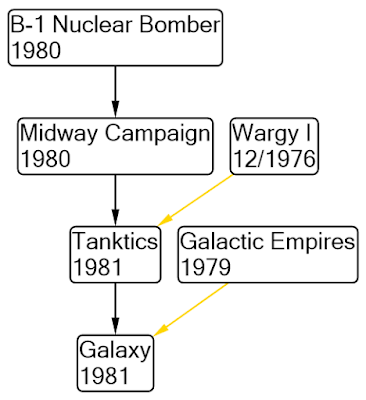 Before seriously playing B-1 Nuclear Bomber, I briefly checked out the Apple II and TRS-80 versions, which were released simultaneously and distributed together on a cassette tape. Both are written in BASIC, and the TRS-80 version is a bit more advanced, with sound effects, semi-realtime play, and a curses-style CRT display rather than a printout-style one more commonly seen in BASIC games. 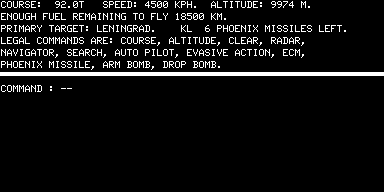 But being more advanced doesn’t necessarily mean it’s more authentic, and more importantly, this version is nearly unplayable, because the input dropping is insane. I don’t know if this is an emulation bug, but when the display updates, which happens every 5-6 seconds, you have a very short window of time, slightly less than one second, to enter your commands. Type a keystroke outside of this window, and you won’t even get a sign that it registered until the next display refresh, and even then, it might just get dropped.

I won’t suffer that when there are other options, and I am going with Apple II on the grounds that between it and the PET, the Apple II was more powerful, more popular, and almost universally supported by Avalon Hill during its first few years of operation.

As a cassette-based game, this won’t work in AppleWin unless you use a pirate compilation disk image, which aren’t that hard to find, but may differ from the original. I opted not to, and if you want to play this way too, I wrote instructions on playing Apple II cassette games in MAME including some sanitized tape files, which you can read here (this uses AppleSoft BASIC, so you will need the Apple ][+ mode):
https://datadrivengamer.blogspot.com/2019/10/on-apple-ii-emulation-by-mame.html

Before playing, I read a copy of the 1980 manual. The goal is to take a nuclear bomber into Soviet Russia and drop a megaton SRAM on a designated target. Soviet airspace is defended by MIGs and SAMs, and your countermeasures include ECMs, Phoenix missiles, and evasive action maneuvers. A primary target is chosen at random from a list of possibilities, all population centers with at least a million persons, and the rest will be secondary targets. Soviet defenses will periodically attempt to intercept with a MIG or SAM, and their alertness depends on your altitude, proximity to a defense complex, and whether or not you have armed the SRAM. ECMs and evasive actions are more effective against SAMs, while Phoenix missiles are more effective against MIGs and can also take out complexes.

In other words, this is Dr. Strangelove: The Game. 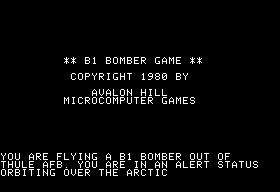 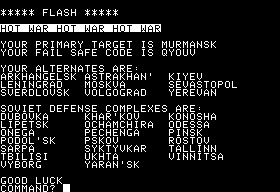 Re-releases of this game came with a map of Soviet airspace, but the 1980 release didn’t, so I tried to see if I could do without.

I set a course for Murmansk and my altitude to 300. 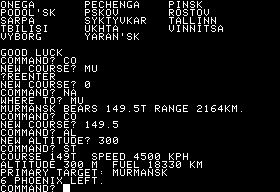 With my primary target over 2,000KM away, I put the plane into autopilot for an hour, and was interrupted by a SAM interceptor. 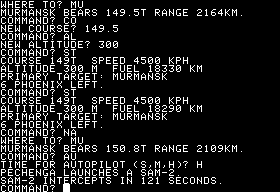 I launched ECMs. Lots of ECMs. 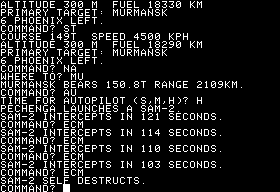 And then I did a status and target check. 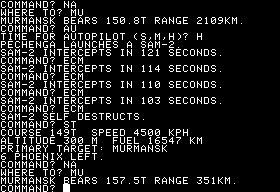 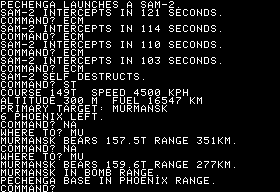 Murmansk was in range. So I armed the bomb and dropped it.

While I was at it, I decided to launch a missile at Pechenga. 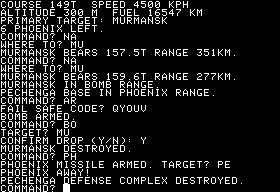 Mission complete, so I got the coordinates to Thule AFB and autopiloted back home. 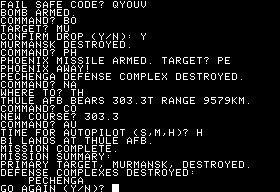 I was a bit puzzled by how trivial my victory was. Apart from a brief foray into the TRS-80 version, this was my first attempt at B-1 Nuclear Bomber, and my victory just seemed so shallow. I didn’t do much more than follow the instructions in the manual! My only real tactical decision here was to fly at 300m, and this was because the manual said lower altitudes meant less frequent air defense, but warned against flying lower than 300m. Apart from that, I navigated directly to my primary target, used ECMs against a SAM, armed my bomb at the last moment, dropped it, took out a target of opportunity, and navigated directly home.

I tried a replay to see if things would be any different. This time my primary target was Leningrad, and I used the same tactics as before, except that I didn’t bother changing my altitude.

I did face more resistance, and at one point had a MIG and SAM launched simultaneously, but a single ECM neutralized both. 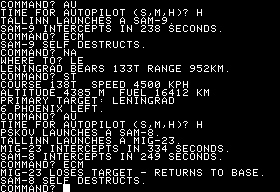 Bases around Leningrad launched a ton of ordinance in my direction, but I nuked it before they could intercept. 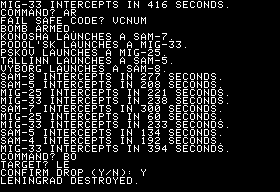 And then a single ECM neutralized more than half of my threats. 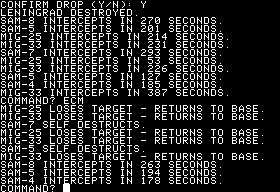 The rest were also neutralized with more ECMs.

On the way back, I took out a defense complex, but another SAM and MIG proved very stubborn in resisting my ECMs. After many, many attempts, I did neutralize the SAM, but the MIG just wouldn’t get off my tail. I launched my missiles at it, but all missed. Eventually, after many more ECM failures, I tried an evasive maneuver, which worked immediately. 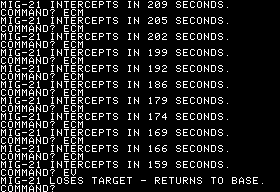 Another SAM on the way back refused to self-destruct, but lost its target when I took evasive action.

I made it back home on autopilot. 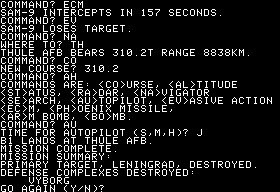 I took one last mission, just to see if it would be easy a second time at low altitude. It was.

A retrospective capsule review by CGW states “its play mechanics were embarrassing when it was initially released.” The cover art and clinical presentation suggests a fairly complex flight sim. And for all I know, maybe there is some complex aeronautical computation going on under the hood, but I doubt it, and didn’t care enough to look. Either way, this game can be beaten with extremely simple tactics – fly low, fly direct, drop the big one, and then fly home, while using countermeasures to throw off interceptors and missiles to knock out defense complexes when possible. There’s no need to plot weaving courses around defense complexes to avoid the worst of the Soviet defenses. The hardest part of it all is not forgetting the failsafe code.

Now wouldn’t that have been a letdown ending to Dr. Strangelove.
Email ThisBlogThis!Share to TwitterShare to FacebookShare to Pinterest
Labels: Avalon Hill