I’ve had enough of this game.

It isn’t, as one might expect of early CRPGs, excessively frustrating. Even though death is permanent, I never once died in combat. I only had even one close call, near the beginning.

The problem is that Moria is boring. This is by far the biggest PLATO CRPG I've played yet, but it hasn’t got the content to justify its size. There are hundreds of repetitively-designed mazes, each with hundreds of squares to map out, and there’s not much in them to make exploration rewarding. You must map out the mazes as you explore them, and the only things worth finding are the staircases that lead to the next maze.

The game simply hasn’t evolved in several hours of routine. I’ve mapped out boring dungeon after boring dungeon, occasionally getting interrupted by simple combats that I can win without really trying, and sometimes I waited to recharge. Doing this multiple levels beneath the desert is exactly the same as doing this in the wilderness, only without the multiple exits to the city and dungeons to locate. Pedit5 was short enough that it never got a chance to be boring, and dnd didn’t get boring until I was grinding for the dragon. Moria gives me little to do but map out lifeless mazes, which stopped being interesting, and with no end in sight for months, why bother any more?

Before I had even entered my first dungeon, nothing really posed a threat as long as I played carefully. My golden rule had always been simple; once vitality drops below 60, take no risks. If in a fight, end the fight ASAP, whether by running away or by using a fighting technique known to work well against that monster. If not in a fight, then just idle 2-4 minutes until my vitality rises to 100. If I found a chest and had fewer than 60 vitality points remaining, then I’d just wait to regenerate before opening it - you can heal just fine with the chest right in front of you. I sprung a few traps, but none did anything worse than take off a few vitality points.

I’d fought multiple elementals in the wilderness without any trouble. Just a few dungeon levels down, I was routinely encountering Reapers, which were the toughest enemies in the game according to the helpfile. They went down easily with tricks. 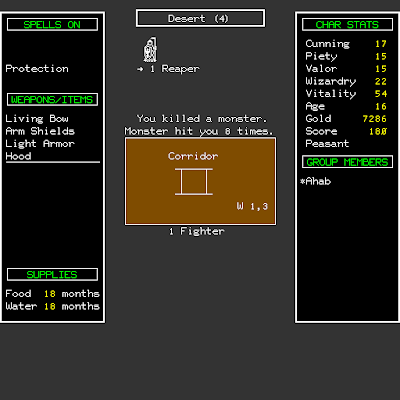 I don’t know if the game gets meaningfully more difficult as you descend more levels, but it’s a little hard to imagine. Monster groups get larger as you descend, but you can run from partly defeated groups and return. Supposing I found 10 reapers? I imagine that even at my current stats, I could kill one with a trick, sustain some hits, run, wait to regenerate, and then re-engage the remaining 9 reapers and repeat.

I suppose that in a game this glacially paced I’d rather the combat be too easy than have it constantly kill me and force me to restart. But what I’d really prefer was that the dungeons were reasonably sized, and perhaps the combat a touch more difficult so that I would feel like there’s a risk of dying, and therefore have a reason to figure out optimal battle tactics against each monster type.

I did eventually join the Thieves Guild, once my Cunning reached 20 points. 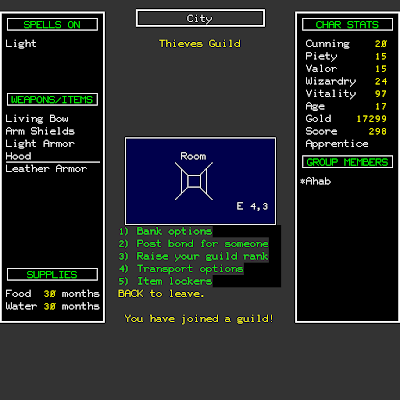 I’m not really sure why you’d want to deposit money in the bank. There’s no risk of losing money on your person, other than dying. Does the bank bear interest? Is there a limit to how much you can carry? And if so, is there a reason you'd want to hold onto that much money and not spend it right away?

Without an active multiplayer, there’s not much point in posting bond. Speaking of which, you can try to rob guilds that you are not a member of, which I hadn’t tried out of fear of going to jail.

Raising the guild rank would take 40 cunning and a lot more gold than I ever acquired. Perhaps gold and stats come more easily in the deeper dungeons, but reaching them is just too much of a time sink to feel worthwhile.

Transport options are interesting. You can set up a “camp” anywhere in the game, and then teleport to it from your guild. You can also teleport to the location of another player.

Item lockers can store items that your next character may inherit upon your death.

Given that I decided I was done with the game, I decided to try robbing the Union of Knights, just to see what would happen.

At this point, I’m actually quite stuck here. You can’t even return to the main title screen to roll a new character; pressing BACK takes you directly out of the game. Re-launching sends you directly to jail, skipping the title screen. Maybe someday, someone else will play the game, join the Thieves Guild, and post my bail, but I’m not holding my breath. It’s almost forward-thinking, to have actual consequences that you can’t get around just by restarting.
Moria was, according to its developers, mainly influenced by dnd, and given the corridor/room dichotomy only found in pedit5/Orthanc, seems it must have been influenced by them as well. I had done a dndlike comparison last year, and thought this might be a good starting place to analyze the differences between Moria, the dndlikes, and Wizardry.

Dungeon size – There are five very large but finite dungeons. Uniquely to Moria, the levels are divided into blocks that alternate between rooms and corridors (pedit5/Orthanc are superficially similar this way), and also uniquely, Moria has a two-level overworld consisting of a monster-free city and a “wilderness” level which connects the four dungeons.

Goal – No express victory condition, but the helpfile identifies some achievements to aim for.

Gold – For the first time in a CRPG, gold is actually used to buy weapons and armor, rather than just being something you convert to XP. It is mainly found by killing monster. Wizardry was the same.

Dungeon exit – Staircases at the top of the dungeon lead to the overworld. Wizardry was the same, except that the city was a menu screen rather than an area.

Multi-level transportation – Your guild can offer teleportation to a camp or another player. Wizards can teleport right back.

Combat resolution – Realtime you-go-they-go system, with you and your followers fighting multiple groups of monsters. There isn’t really a concept of “rounds,” just a cooldown period after each attempted action by either party. Apart from being realtime, it’s a lot like Wizardry, just simpler.

Stats – Cunning, Piety, Valor, and Wizardry neatly correspond to dnd’s DEX, WIS, STR, and IQ, but are a bit more nuanced in their function, and unlike any dndlike, they increase independently with use.

Classes – As in pedit5/dnd, there are no classes; you have all of the abilities you would expect of a fighter, wizard, priest, and rogue. You may eventually join a guild to enhance one set of these abilities, but this is of no detriment to your other abilities.

Spell system – Resembles dnd, where mage and priest spells are distinct from one another and you may cast all of them from the start. Unlike dnd, spells cost vitality rather than SP to cast, and there’s a much greater emphasis on instant-kill spells than damaging spells.

Monsters – Many distinct monster types, but I couldn’t really determine what distinguishes them. They’re all kind of wimpy, have no tactics except hitting you for small amounts of damage, and before too long, fall quickly to your spells, prayers, tricks, or bludgeoning.

Random encounters – Some squares in the dungeon are seeded with monsters when you enter, and will be there until you kill them or leave the level. There are no other random encounters. 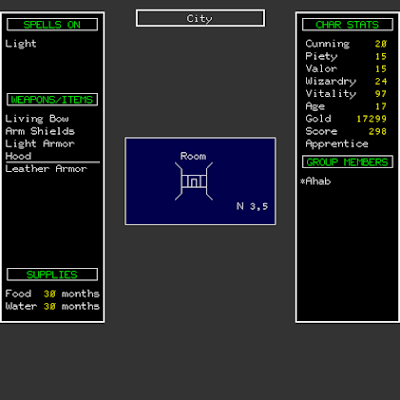 Apart from the graphics, not a lot of this anticipates Wizardry. Quite a few points are innovations on the part of Moria that aren’t common in the genre.

There are innovations that do anticipate Wizardry-like games, but also differ greatly from its implementation.

And then there are innovations that match Wizardry closely or exactly.

Moria deserves credit for its innovations and its legacy, and it should be interesting to compare it to Oubliette and beyond. But it’s the least fun I’ve had in a PLATO game yet. I’m not interested in ever playing it again, and quite possibly can’t.
Email ThisBlogThis!Share to TwitterShare to FacebookShare to Pinterest
Labels: PLATO