With a city map created and in hand for later use, I prepared to assault the wilderness. I’d need 15 valor to wield even the simplest 1-handed weapon, so I asked the shopkeeper what sort of two-handed weapon I could get for $150 (all I had).

My knowledge of the price system helped out here; it predicted that the club he recommended was worth $82. The shopkeeper asked for $152, even though he just told me it was the best I could get for under $150. I haggled him down to $96. The $54 left over wasn’t enough to buy anything else, so I went into the wilderness via the nearby stairs.

It didn’t take long to encounter my first monster. 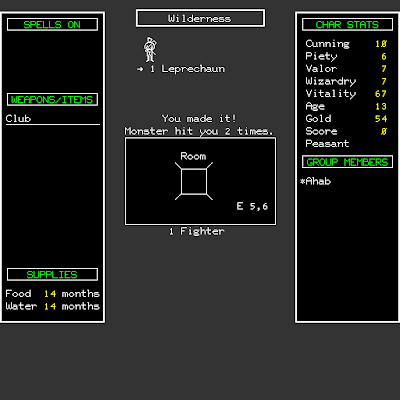 I chose to pray, in order to boost my pathetic piety. Holy Word failed several times in a row, getting my vitality gradually reduced, but Escape worked on my second try, and raised my Piety value to 6. These combat prayers had no vitality cost, except for getting hit in between unanswered prayers.

After the successful escape, I hadn’t moved from the encounter square, and could simply walk off and walk back on, where the leprechaun was still waiting for me. I grinded out two more points of piety in this manner, then fought it, which instantly killed it and raised my valor one point. Throughout this exercise my vitality never dipped below 50 points, and I found a treasure chest with $231 and no traps.

This sort of leniency was almost shocking; in my previous PLATO adventures, new characters were at risk of being one-shotted right out of the gates. Wizardry, too, has a well-deserved reputation of early game brutality, albeit one that’s not quite as bad. Here, you’d have to try to get yourself killed against a leprechaun, which is a level 30 encounter according to the helpfile.

On my next encounter, against a giant lizard, I decided to try casting spells to boost my Wizardry stat. A single paralyze spell worked, got me a boost, and an even better reward. 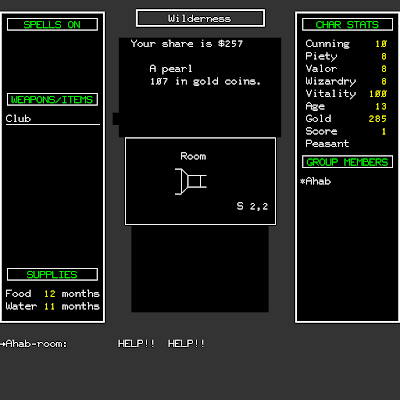 The next encounter nearly killed me.

The manticore did no more than 9 damage per round, but resisted my spells and prayers, and running failed multiple times. My vitality was 5 when I successfully escaped.

Another monster in this block, an enchanter, fell easily to Holy Word, and dropped a handsome reward worth $2000.

I returned to town and bought some better gear.

Returning to the wilderness, I found that the block I explored before had been re-seeded with monsters, in different places. Few that I encountered posed any threat, so I just continued using whichever battle tactic would raise my worst stat. Holy Word for Piety, spells for Wizardry, fighting for Valor, and eventually tricks for Cunning. On the occasion that an encounter just wouldn’t succumb to my tactics, I’d run once my vitality dipped below 60, and leave that spot alone.

Spells usually didn’t win fights; there are so many to choose from, and each attempt cost over 10 vitality at my level, plus whatever amount of hits the monsters inflict, so I could only try four times at most before running and waiting to regenerate. It was still worthwhile, because even failed spells can raise wizardry.

I did some more mapping, soon found another entrance to the city, and found it neatly corresponded to one of the city exits I had found earlier. The coordinates weren’t aligned on their respective maps, though.

Before too long, I stumbled upon the entrance to the mountains. Soon I started to run low on water, but I now had enough gold to max out my food and water reserves, and enough left over for a shiny new helmet.

On some more exploring and grinding, I killed a zombie, and was awarded a seriously high-end weapon considering the location.

I spent the next few hours completing my map of the wilderness, which was smaller than the city; only 5x6 blocks, compared to the city’s 8x7. That’s still much bigger than a Wizardry level. None of the enemies posed any threat, and I accumulated over $20k through fighting them, which I spent on food/water refills and some new gear.

My map of the wilderness: