Versioning’s a tricky thing. I view Empire, Empire III, and Empire IV as distinct games, as they occupy distinctly different niches, and Mobygames does likewise. Empire is an RTS, Empire III is a ship-to-ship space combat game, and Empire IV is a hybrid of the concepts where players command ships directly in service of their empire, with the goal of conquering every planet in the universe. Wikipedia, however, only has a single article on Empire and describes it as more of a continuous development cycle than as a series. This view is probably more accurate to how Empire was seen in its time; the game I call Empire IV is simply called Empire on Cyber1, and the game I call Empire III had only been renamed so retrospectively in 2004 to distinguish it from later versions. I’m still using my scheme, even if it is anachronistic.

There are also at least four different versions of Empire IV on Cyber1, with lessons named “0empire,” “cempire,” “vempire,” and “zempire.” A helpfile describes the differences between them, mostly focusing on the latter two, but it’s not terribly meaningful to me. 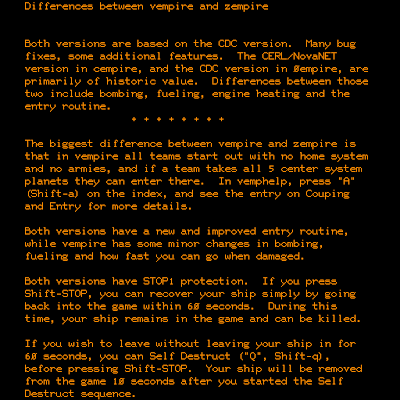 For the first time in this series, Empire IV has a detailed and complete helpfile available, going well beyond basic controls, and even has illustrated pages showing annotated ingame screenshots.

The goal, as in Conquest, is to conquer the universe in your empire’s name. In Conquest, there were up to eight players and each commanded their respective empire, initially consisting of one planet. Here there are up to 30 players, each commanding a single starship, and belonging to one of four different empires. Ships may bombard planets, ferry armies around, and attack other ships trying to do the same. Players can drop in and out of battle at any time, and games may last for days. 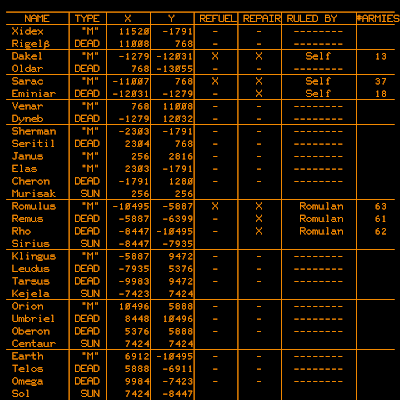 There are 25 planets in the universe, and the planets under your empire’s control (or ones you aren’t yet at war with) provide protection to your orbiting ships. 11 are considered “Class M” and are the only places where ships may refuel. Planets are conquered by beaming down imperial armies, which are automatically recruited on friendly planets. You may bombard planets ahead of time to soften them up before your invasion, but this act drops your shields for some reason, and you will take some damage in retaliation from the planetary defenses.

Some neutral planets are “self-ruled” and will provide free fuel and repairs to neutral ships in orbit, but as soon as you attack one, they will permanently declare war and fire on your ships instead.

The helpfile has an extensive list of ship commands, with further help pages on each individual command. 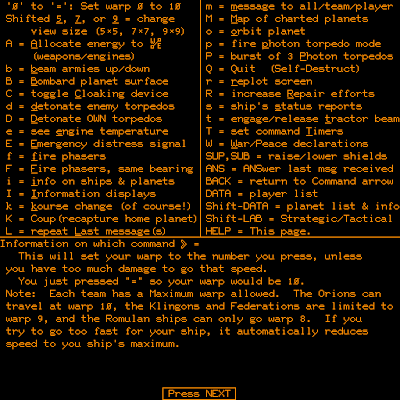 Another chapter in the helpfile offers beginner tips, starting with a list of the most important commands for surviving battles. 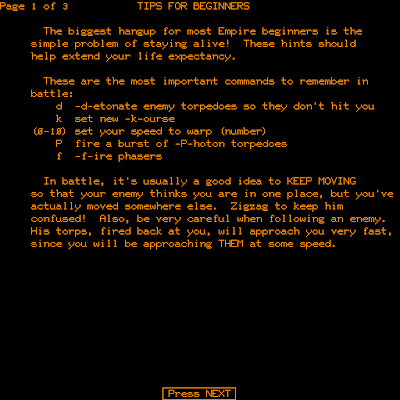 And another section walks you through Empire gameplay, using annotated screenshots. 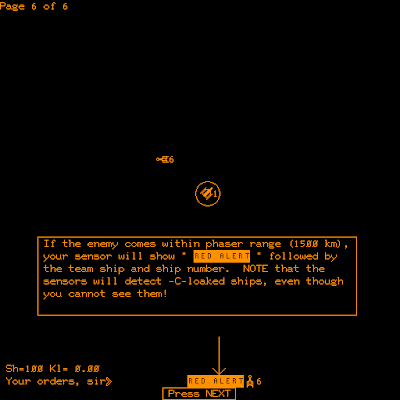 I cannot overstate how impressively thorough this helpfile is. It was rare for even multimedia PC games of the 90’s to have that much level of detail, and this was in 1976!

I played the game, and as usual, was all alone in the universe. 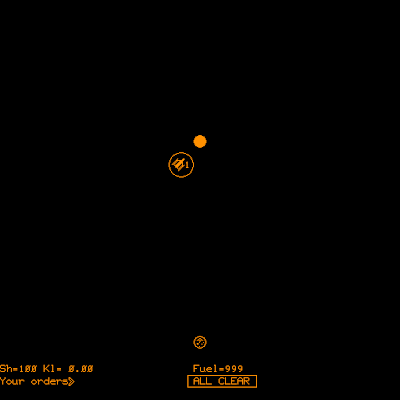 I had a lot of trouble navigating back in Empire III. The Newtonian physics, the scarcity of bearings on the screen, and the screen that only updates once every five seconds made it really hard to understand what was going on.

Empire IV still runs at 1 frame per 5 seconds, but navigation is much easier. The Newtonian physics model is highly relaxed; now when you set a course, you instantly rotate to your chosen heading. Inertia is a thing of the past too; now your throttle determines velocity, you always head in the exact direction you are pointed, come to an instant halt when you set the throttle to zero, and instantly reverse directions if you turn around 180 degrees, although you may slow down in the process. And finally, the universe has more stuff in it. Even though it takes five seconds to update the screen, you’re never too far away from a planet to use one as a visual beacon.

Without any ships to stop me from conquering the Universe, I reviewed the map. 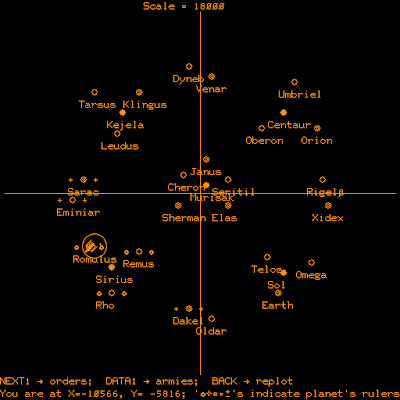 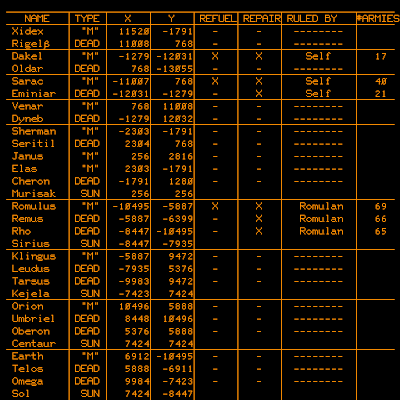 Romulus was right there, and neutral planet Eminiar was nearby and relatively weak, with only 21 armies compared to Romulus’ 69. I orbited Romulus to beam up some armies.

So I flew to Eminiar and bombed it twice, sustaining some damage. Then, I broke off from orbit to repair. 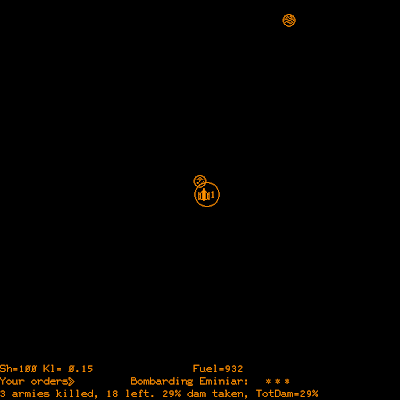 I repeated this process a few more times, until it was down to three armies, and my bombs were ineffective. 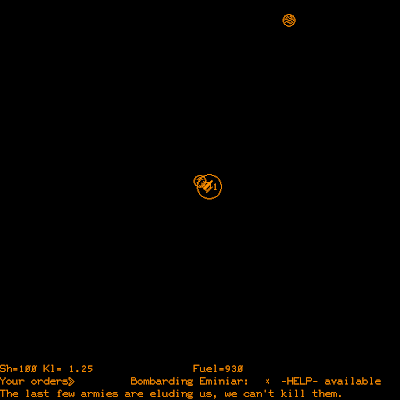 That bit of action raised my kill count, so I went back to Romulus to beam aboard some armies. 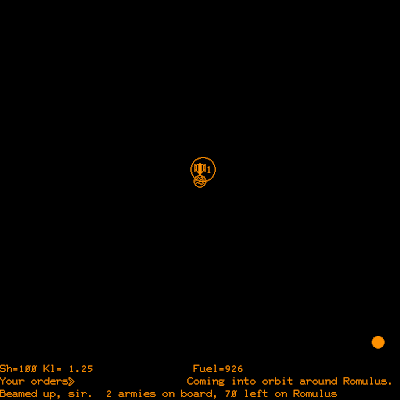 I set a course back to Eminiar, orbited, and dropped off my armies. 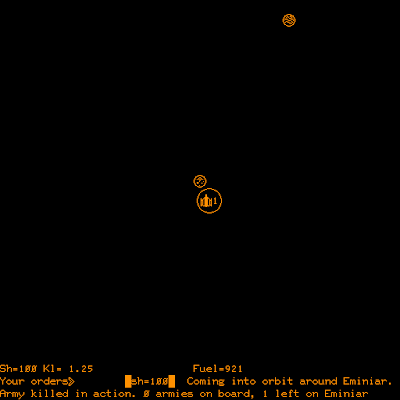 My two armies were wiped out but took out two of theirs, leaving them with one, so I went back to Romulus for two more, and flew them back to Eminiar. 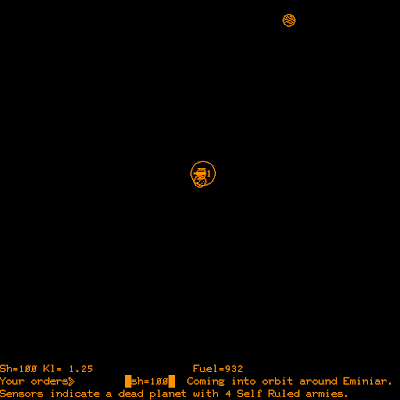 Argh, the armies had reproduced! I bombed Eminiar again, killing one army. I beamed my two down to kill another two, leaving them with a single army again, and went back to Romulus again to repeat this process yet again. 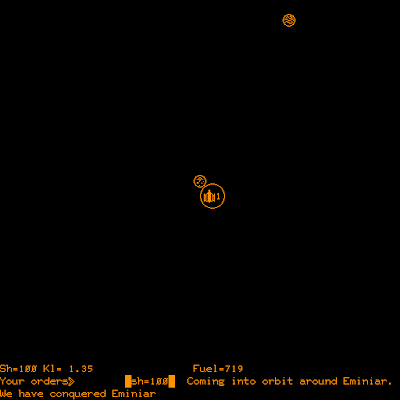 Victory! One planet down, 21 to go. But I wasn’t interested. Conquering a planet all by myself was a tedious process, and I couldn’t see it being rewarding to do it again without any real opposition.

I figured that was just about all the game had to offer without other players to fight.

Later, on a Sunday evening, I returned and saw that there were six players in Empire. And so I joined the fight, which was a match of Romulans vs. the Federation. The battle focused around the planets Seritil and Elas, planets on the respective borders of the Romulan and Federation quadrants. They had already been bombed down to their last three armies, with their ranks occasionally dipping or rising as other starships beamed down friendly or hostile armies to whittle or bolster their numbers. 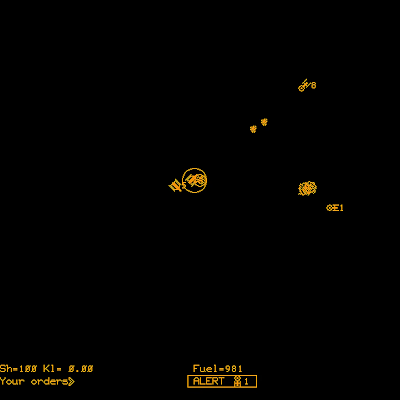 The other players were friendly and welcoming, offering tips and suggestions without getting impatient at my ineptitude. All that said, I felt utterly lost when it came to dogfighting, and didn’t feel like the hour or so I spent helped me understand it any better. I’d often be at full shields and full health, and then suddenly be greeted with a message that I’d been destroyed by another player, without having seen any phasers or torpedoes fired at me.


I’d frequently hit the ‘d’ key to detonate enemy torpedoes, and players recommended doing that all the time. The game only updates its display in five-second increments, but the actual game state is updated much more frequently than that, so sometimes a player has launched torpedoes at you, and you can’t see them because the replot clock hasn’t ticked yet, but they’re there, and are moving at you, and may even hit you before you have a chance to see them. At the same time, these invisible torpedoes can still be triggered by your detonator.

I never managed to score a single starship kill myself. My torpedoes would just get remotely detonated. I tried using my phasers, which seemed to be hitting my enemies, but eventually I’d be blown up with torpedoes or phasers with no indication that I had caused any damage to my target.


It’s possible to increase the framerate by manually replotting the screen repeatedly, but players recommended against it. Apparently, your starship only actually travels when your screen replots, effectively “jumping” some distance in an instant.

Here’s some footage of my first online battle.

Clearly I need a lot of practice, and perhaps some more guidance, if I’m ever to get anywhere with this game. For the purposes of Data Driven Gamer, I’m done with it for now, but I’ll keep logging on every now and then to see if I can play some more. If I ever reach a point where I feel like I’ve made decent strides in understanding Empire, I’ll have a follow-up post. But in the meantime, I’m moving on. Sort of.

I’d be remiss to not comment on some striking similarities between this game and 1971’s Star Trek computer game. In both games, you’re piloting a starship in 2D space, and have two weapons; phasers and torpedoes. Navigation is performed by entering a heading in degree and a “warp factor” to determine how far you’ll jump in that direction. Phasers are instant hit weapons whose damage drops off with distance, and torpedoes are moving projectiles that must be directed using the same azimuth system used for navigation. Your ship has status for shields, fuel, and damage, the shields can be quickly recharged at the cost of fuel, damage is repaired over time, and you refuel at stations or select planets which are limited in number and may be far from the action. A lot of these similarities can be chalked up to the fact that they are both inspired by the show Star Trek, but some of the specific details in their interpretations of the seem too close to be a coincidence.

But there are profound differences at the most basic levels. Star Trek ’71 is single player, and is mainly about searching the galaxy for targets to blow up before time runs out. Empire is multiplayer, and is about fighting other ships for space dominance and then conquering the universe. Star Trek’s Klingons are stationary targets, sitting ducks for your torpedoes if you can line up a shot without any obstacles in the way, and has nothing resembling the planetary defense, bombardment, or invasion which plays such a huge role in Empire. Star Trek is turn-based, Empire is a frantic action game. Star Trek involves sector scanning and searching quadrants for lurking Klingons, Empire gives you a strategic galactic map with the press of a button.
Email ThisBlogThis!Share to TwitterShare to FacebookShare to Pinterest
Labels: PLATO