Buy Asteroids and about 90 other Atari games in the Atari Vault on Steam:
http://store.steampowered.com/app/400020/Atari_Vault/

Once again, Atari went overboard with padding their games mode count. Its 66 game count sounds less egregious than Space Invaders’ 112, and yet it feels far worse. 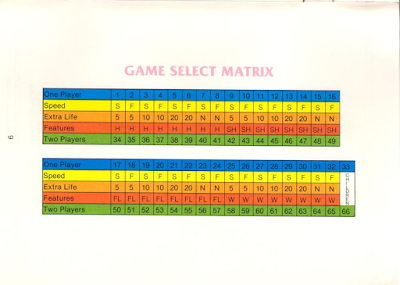 The one player / two players option sounds cool, with having two ships blowing up asteroids together. I thought this was the best feature of Atari’s Space Invaders. Just one problem; here, the two player modes merely alternate, making them completely pointless.

“Features” dictates what your ship does when you press down on the joystick. “H” is the hyperspace jump found in the arcade version. “SH” means shields, and “FL” means an instant 180 degree turn, which sounds quite useful. “W” means nothing happens.

Modes 33 and 66 are “children’s” modes, described in the manual as easy games with slow asteroids, hyperspace, and an extra ship every 5,000 points. But it doesn’t say what makes that any different from modes 1 and 34, and from playing, I couldn’t really tell.

If these game modes were arranged as an options menu, it may have looked like this:

If we took out the options that look like lazy padding to me, it would look like this:

Difficulty switches control whether or not UFOs appear. Off would be no fun, so I turned them on. I’m surprised Atari didn’t just use this setting to double the number of game modes.

Oh dear. This mode is amazingly boring! The asteroids, now colorful blobs, just sort of move up and down the sides of the screen, being no threat at all to you as long as you don’t move left or right. The UFOs aren’t much of a threat either.

In accordance with the VCS’s limitations, big and medium asteroids usually don’t split when shot, but just shrink instead.

Fast asteroids make a huge gameplay difference. Oddly, the asteroids don't seem to be any faster, but they actually change their trajectory when shot, making them almost a credible threat. Almost.

I never used the hyperspace option in the arcade game or the VCS port, but shields are an interesting substitute. Unfortunately, they trivialize any difficulty in the game by providing a reliable invincibility option for whenever you think you might be in trouble. Granted, overusing shields will kill you, but you’d almost have to try for that to happen. I can also kind of imagine that this would be more difficult with a real VCS controller, as you have to push “down” to activate them. And the “fast” asteroids are still much slower than their arcade counterparts.

The first few rounds are still so boring that I cut them out of the video in order to spare you a modicum of the tedium that I went through. I did not need to use the shields at all during the cut portion.


I lost the footage for this one. I didn’t care enough to try to re-create it.

The flip option instantly reverses your ship’s direction. For this game, I decided to play it more mobile, not because it seemed like a good strategy, but because staying still was already pretty boring, and reversing your ship’s direction also seemed better suited to a mobile playstyle, giving you the ability to move in one direction and instantly turn around so you could shoot in the other.

I kind of imagined it being more interesting, but inertia isn’t as big a deal in the VCS port as it was in the original, so the whole “shoot backwards while moving” scenario wasn’t as common or dramatic as I envisioned. I still quit out of boredom long before I ran out of lives.

Still, this mode was the closest I came to having fun with this port, having a ship option that I actually wanted to use, but not one as overpowered as shields.

I just don’t think the VCS was suited to this game. Even at its best, it’s slow, repetitive, and predictable, with far too little going on in the screen to be interesting. I’ve used the word “boring” a lot in this post. I suppose breaking big rainbow-colored rocks down into smaller rocks at a pleasantly relaxing pace without much threat of failure could hold a Zen-like appeal, but that’s not why I play video games.
Email ThisBlogThis!Share to TwitterShare to FacebookShare to Pinterest
Labels: Atari