Game 58: Wizard and the Princess

As Wizard and the Princess is a color game, I considered using ScummVM to play it. Not only is it sharper than AppleWin, but it avoids the rainbow artifacts in the text area.

But when I tried it, I quickly changed my mind. Although it is sharper looking, the colors feel off compared to AppleWin in its Color TV mode.


ScummVM is also missing a graphical effect of the Apple II gradually “painting” each screen. The devs probably thought it would be a quality-of-life improvement to skip that part / speed it up, and while it can get tiresome to sit through, it still feels inauthentic to not have that transition effect at all.

On top of that, ScummVM is very particular about which disk images from this series of games. For Wizard and the Princess, only the disk image from The Roberta Williams Anthology will work. For Cranston Manor, which never got officially released in any emulated form, they have essentially ensured nobody can play it in ScummVM except for the ScummVM devs.

So I’m sticking to AppleWin for this game and any others in the series.


This time around, there’s a printed instruction manual with a brief backstory. You’re a “happy wanderer” passing through Serenia, and come across a town square crier proclaiming that King George’s daughter Priscilla has been kidnapped by the evil wizard Harlin, whose castle lies beyond the mountains far to the north across the great desert. Seeking a grand reward, you head to the desert, warned by a villager that Harlin is “very powerful and bad.”

Loading the disk, you’re dumped right into the game, no title screen, no ingame instructions, and in the 1980 disk image, not even a copyright notice. It lends some more credence to my theory that the extant version of Mystery House, which had all of these things, is a re-release. Then again, maybe the Williams’ just decided to nix these from this game now that they had a printed manual instead.

The first challenge is to pass the desert. Going north, a POIIIISONOUS SNAKE! prevents further northward travel. Endless desert spans in all other directions, with rocks everywhere which conceal scorpions that killed me when I tried to take them.

The desert isn’t actually endless though, it’s just yet another Maze of Twisty Little Passages, and can be mapped, using slight variations in the positions of the rocks as breadcrumbs, at least on the screens where there are any. One of these rocks can be taken without getting stung by a scorpion behind it. Have fun, I didn’t!


Further north was more desert, but arranged in a reasonable grid-like manner with more visual features to keep my bearings straight. Rattlesnakes seemed to crawl around randomly, but didn’t impede my progress. I picked up some junk here, including a locket, a stick, a cracker, and some notes with unreadable “strange writing.”

Another rock in the desert pinned down a helpless snake, and when I picked it up, he announced that he was a King Snake, and rewarded me with a magic word, “HISS,” which temporarily turned me into a snake!

I reached the end of the desert and got stuck at a chasm. HISS wasn’t helping. I had to look up a solution; you say HOCUS. 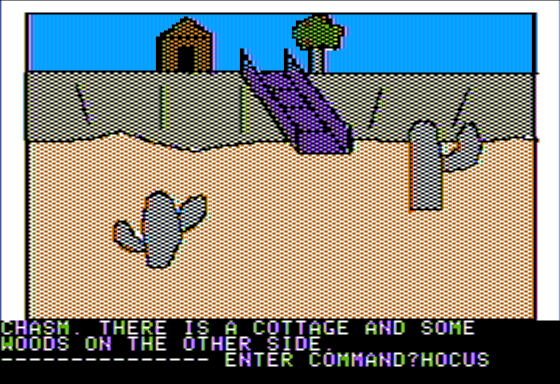 Surely they couldn’t have just expected you to just guess that, could they?

In retrospect, I figured out the clue. It was in those notes I found in the desert. 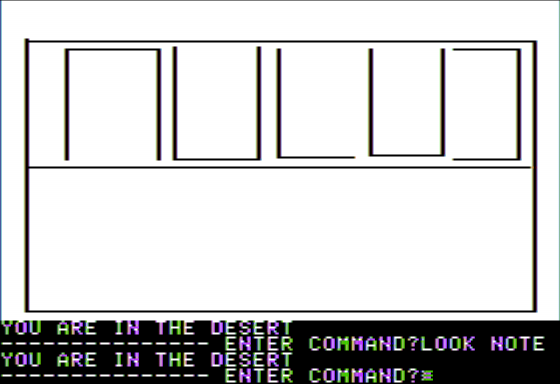 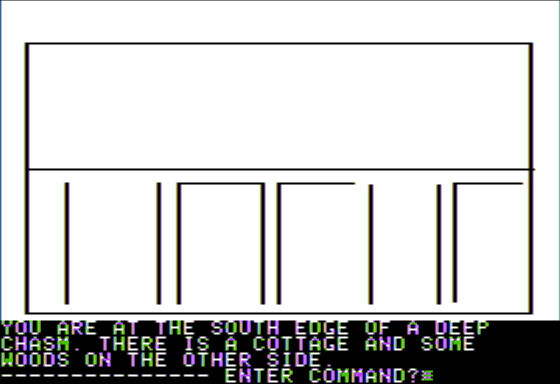 Combine them vertically, and you get: 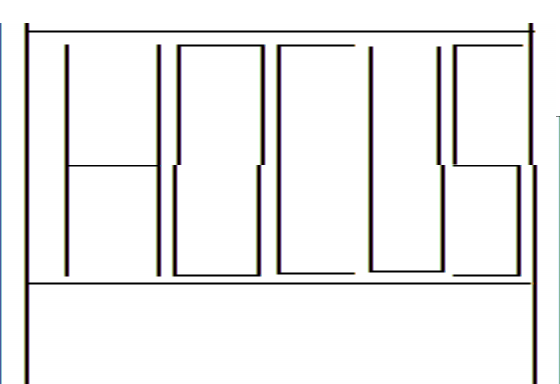 On the other side of the chasm: 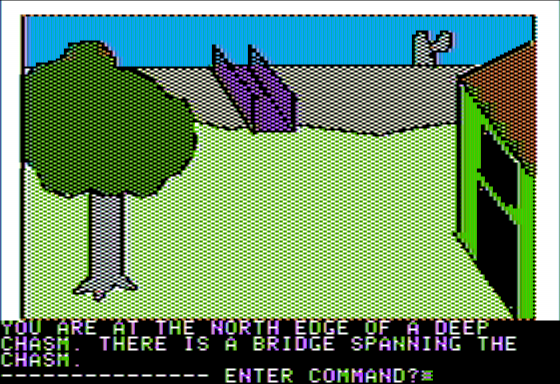 Roberta seems to be having trouble with geography again. The bridge is to the south, but the cottage is to the east!

In this woods area, a gnome swiped my stuff, but I pressed on, exploring this new woods area. A mysterious hole in a tree led to a staircase heading down to a door locked from the other side. Another tree was climbable, and gave me a view of the ocean. A bank to the north had a conspicuous crevice that I could slither through as a snake, leading me to the other side of the door, and a cache of my stuff. 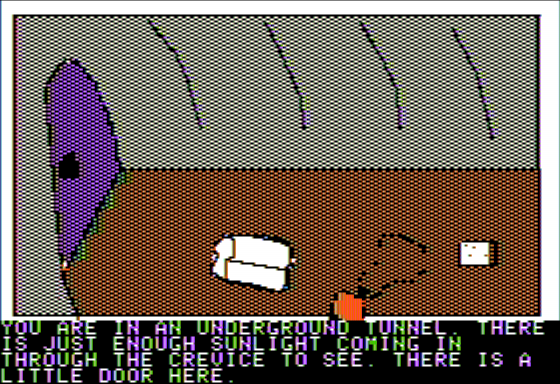 Back in the woods, I gave the cracker to a parrot, who rewarded me with a magic vial that would change me into a bird for a short time.

On the beach to the west, a rowboat was rendered in a curious way.

When these games draw graphics on screen, you’re more or less seeing a line-by-line recreation of how the artist drew it! The rowboat has a visible hole in it at first, but then the hole is textured over concealing the hole. This would not have been evident if I was using ScummVM or a port to a computer platform that used shadow buffering. Clearly Roberta intended to draw a visible hole in the boat at first, but did she deliberately conceal it with texturing, or was this unintentional? Either way, there’s a hole in the rowboat, and you’ll drown if you try to launch it without plugging the hole. My blanket suffices.

A surprisingly straightforward row across the ocean later, and I arrived at an island. 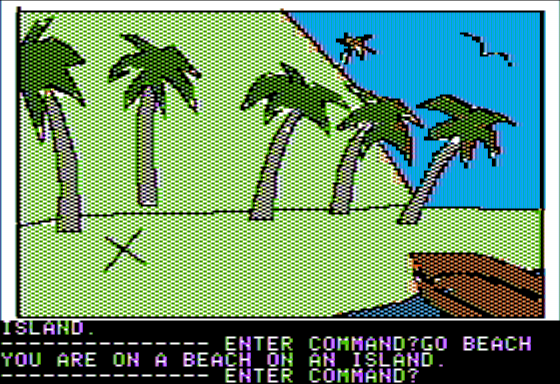 X marks the spot, but I had no shovel. But I had an island to explore, and within it, I found a shovel up in a treehouse that I reached by drinking my parrot potion. Sure enough, there was buried treasure under the X, but when I tried to open it, a pirate emerged from behind a tree and grabbed the chest, darting off to a nearby cave. No matter, I went into the cave and opened the chest without further incident, finding a harp inside.

I got stuck again, finding no use for the harp, and nothing more to do on this island. There was another beach on the north side of the island, but the boat could not be carried – unexpectedly, the game had a specific message when I tried, telling me the boat was too heavy. I also tried eating an apple I found in the cottage to see if it would turn me into a teacher or something, but instead it just killed me. The locket had “LUCY” written inside, which I tried saying, and then my stuff all vanished.

On consulting a walkthrough, I learned that I screwed up – I was supposed to use a rope to get to the treehouse, and drink the parrot potion to fly across the ocean over the north beach.

I foolishly hadn’t been keeping multiple save slots, even though the game allows up to 15, and I knew better than to think I wouldn’t need them. I’d need to restart from the beginning, and didn’t feel like replaying, so for the time being I’m done and will try again later.