The first and only whale by pinball manufacturer Stern Electronics, Berzerk was reportedly the king of the arcades stateside until Pac-Man fever hit.

Just like in Pac-Man, you’re an abstractly-rendered avatar running endlessly through a maze full of malevolent characters, with no ultimate goal but to survive for as long as possible until your inevitable doom. As far as I know, Berzerk’s designer Alan McNeil did not play Pac-Man for inspiration, which had only been out in Japan for six months previously. I guess the abstract concept being chased through a maze of dark blue corridors is relatable enough that more than one person could invent it.

Of course, there are huge differences from Pac-Man. You’re not here to eat dots, you’re here to kill robots with your laser gun. You can move freely around the maze, and the robots are slow and really, really stupid, but they are numerous, shoot accurately, and eventually pack much more firepower than you do.

Robots are essentially worth 60 points per kill. 50 points for the initial kill, and if you clear the room (which usually isn’t too difficult if you survive the first few seconds after entering one), a bonus is worth 10 points per robot. Wait too long to exit a room and the indestructible, Worcester-made Evil Otto will intrude and kill you. Each room can be exited from in three directions; four cardinal directions minus the one you entered from (unless you spawned in that room).

My best attempt scored me over 12,000 points, and I actually wish the difficulty ramped up quicker. The game doesn’t get tricky until 8,000 points in, but repeating that portion again and again is so slow and boring that I’ve lost my attention span about the same time that I really need to have it. In any event, I lasted nearly ten minutes, which is twice as long as my typical arcade game video has been so far.

Fairly early on, I settled on just exiting to the right whenever possible. I learned that heading up or down is asking to walk right into a death trap. The screen is also wider than it is tall, giving robots more of a chance to flank you on either side if you enter a new room from the center of the top or bottom. You are a taller target than the robots, and are much taller than you are wide, so the resulting crossfire would be more difficult to dodge. It’s much easier to avoid vertical crossfire moving laterally, since the humanoid is rather thin.

I suppose you could also play an easy, repetitive game by finding an easy 2x2 grid and looping through it forever, but what fun would that be?

Abusing the robots’ AI to get them to crash into each other, or shoot each other, or walk into walls or my own line of fire was also easy, and yet I never quite figured out how the AI works. They generally won’t walk into walls perpendicular to their own movement vector, but will happily walk into parallel walls, impaling themselves on the protruding edge. On very rare occasions, I did see robots walk right into the broad edge of walls, and one such instance is in the above video. Robots also seem to be inconsistent on how close they will walk to a wall before stopping. I frequently saw a robot refuse to move any closer to me, while another robot behind it made a beeline and crashed right into the first. Other times, both robots would come to a halt.

Also, I believe I have some idea of how the maze generation works. Each maze begins with this template: 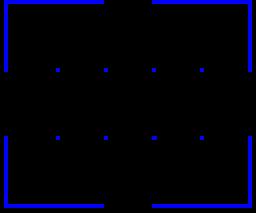 For each of the eight “pylons” in the middle, a wall is drawn in one of four directions, chosen semi-randomly based on your overall coordinates in the maze. There is always a wall going in one direction, never more, never less. If the combination of walls results in two walls being places in the same location (e.g. the top-left corner pylon gets a southward wall and the bottom-left corner pylon gets an northward wall), then they just overlap and effectively become one wall.

I’ve played a lot of shooters for Data Driven Gamer so far, but nearly all of them followed the rule that the game world is confined to what you can see on the screen. Berzerk is novel for having multiple “room exits” each leading to more rooms, as done in Adventure for the VCS, but this is no action/adventure game, as exploration has little point. Each room is just another robot-filled mini-maze, and your choice of exit matters mostly for the tactical consideration. This design seems to anticipate Castle Wolfenstein, a game I’ve seen but haven’t played yet, which appears to follow the same generated maze template, and yet does a lot more as an action/adventure. Did Silas Warner play this game?
Email ThisBlogThis!Share to TwitterShare to FacebookShare to Pinterest