I played the original Castle Wolfenstein back in 2019, and found it to be an infuriatingly inconsistent mishmash of stealth and action gameplay, which occasionally offered excitement, but mostly just irritated me with its endless footlockers you had to open up so damned slowly and that deadly combination of unresponsive controls with unforgiving gameplay.

The sequel, Beyond Castle Wolfenstein, is mostly known for being a game where you blow up Adolf Hitler in his bunker, and not so much for its gameplay differences. So, is it just more of the same, or did Muse Software dream up some meaningful improvements in the three year interim?

I think it's both, to some extent.

I wound up playing the 4am crack version on MAME, as even though AppleWin's WOZ support has come a long way since 2019, the game froze on me during my first attempted playthrough using it.

So, firstly, the controls are as awkward as ever, where QWEADZXC are used for chunky eight-way movement and S to stand still. At least this time, when you bump into things, the screen goes crazy for only a brief fraction of a second and all you hear is a little ding, which is far less annoying than the original game's seizure-inducing noise patterns, but still raises the question of why this happens at all.

You can also, finally, manually holster your weapon with the 'H' key instead of having to deliberately walk right into the walls to achieve the same.

Unlike Castle Wolfenstein, where you could just shoot the Nazis with impunity, and were better off doing so until you located a uniform, here, shooting them is a bad move that will almost always alert the bunker and bring more heat your way, and if anyone sounds the alarm, then you might as well give up. The good news is that patrolling guards no longer shoot you on sight.
Instead, they'll demand your pass, and you get two chances to show the correct one of up to five available before they arrest you. Bribes always work, so the best technique is to guess, and if wrong, offer a bribe, and the next time you encounter a guard, try a different pass. You'll guess right eventually, before the money runs out, and then you'll have free reign of the floor, able to simply show the correct pass whenever you are spotted.

Many rooms contain a locker or two, and a bomb, which you need to finish the game, is located in one of them. Others contain useful supplies, like money, passes, ammo, and keys. They may also, as before, contain useless things like Hitler's diary, coats, and paintings. Some are locked, but instead of passively waiting as long as four minutes to pick the lock, as you did in the first Wolfenstein, there's a sound-based minigame where you guess the three-digit combination and hear a faint 'click' when one of the digits is correct. It's still not exactly engaging, but compared to the system it replaced, it's a massive improvement. Guards will sometimes be alerted if they see you rifling through a locked cabinet, and this can sometimes mean genuine tension as you carefully watch over your own shoulder, worrying about getting caught by a patrolling guard while you try to guess the combination.

I soon found a dagger in an unlocked cabinet, which is far more useful than the gun. Stabbing is fiddly and risky - sometimes guards break their patrol patterns and instead of pulling off a perfect backstab you just lunge, dagger point out, right into their clutches and get immediately busted, and sometimes you fail because the keyboard controls weren't responsive. And you definitely don't want to even try this in a room with more than one guard unless they are quite isolated from each other. But a successful backstab kills instantly, alerts nobody with their scream, and is often the simplest way to ensure you can crack open a locker without being bothered. It also makes exploring the maze-like bunker much quicker when you don't have to show your pass in rooms you've already been in.

Getting caught isn't the end of the world either, as you can retry with the same bunker layout. You'll need to figure out the correct pass again, but the locations of items won't change. 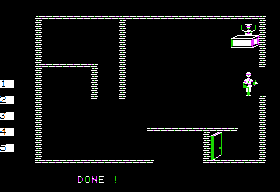 Desk guards are one of the few times you might actually want to shoot, as they can't be stabbed, and they will sound an alarm if you search a locker in their line of sight. Just make sure you have the gun equipped and not the knife when you draw your weapon, and make sure you can leave the screen after shooting before reinforcements show up.

You can also bribe them to find out what the current floor's correct pass is, but if you've lived long enough to find a desk guard, you probably already know.

Once you locate the bomb, which according to the manual is always on the first floor, you need to find the elevator and descend to the next. 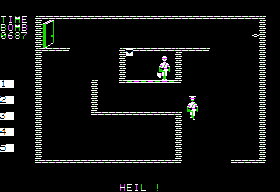 The timer is, incidentally, basically irrelevant, as you can reset it any time. You don't want anyone to see you doing that, but it shouldn't be too difficult to find a private alcove should it get too close for comfort.

Level 2 will have a different pass than level 1 did, but the same procedure applies for deducing it. If you found the dagger already then there's no need to search the lockers here either - all you need is the bomb and the dagger and perhaps some spare passes, which can be found easily enough on the corpses of backstabbed guards. Your goal here is mainly to find the elevator to level 3.

Level 3 is significantly smaller and more linear than the first two. Once again, you'll need to learn the pass, and when you do, you can go anywhere as long as you don't do anything stupid like be seen with your gun or knife out.

Your goal here is literally Hitler.

Drop the package outside the door, reset the timer, and leave. Your maps and pass notes should be enough to get you back to the starting room on level 1 without any trouble and with plenty of time to spare, and the more guards you've stabbed along the way, the more spare time you'll have. 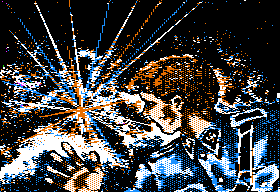 Try as you might, only one man can kill Hitler, but you'll have the chance to replay on a higher difficulty. I did, having attained the rank of "allied intelligence agent." The chief differences I noticed were that more of the cabinets were locked, and guards were more numerous, often patrolling rooms two at a time in areas where there would have been one or none, making it that much more difficult to open some of the locked cabinets without getting busted. There were no elite guards like the SS officers seen in Castle Wolfenstein's NG+ mode.

There was one big problem. This time, the bomb was nowhere to be found on level 1! Nor on 2, or even 3. I checked and double-checked every room, but just as the war plans eluded me on a subsequent playthrough of its predecessor, so did the bomb in a subsequent run of this game. I don't know if this is an emulation bug, or a consequence of an incorrectly dumped or cracked disk image, or if there's just something special you have to do in higher difficulty levels to find the bomb, but whatever the reason, my motivation to keep playing was, once again, kaputt.

GAB rating: Average. Beyond Castle Wolfenstein feels much like what I expected the first game to be - a somewhat simplistic predecessor to Metal Gear-style stealth. It mitigates many of its predecessors most serious problems, making it so much more playable, but by removing combat as a viable tactic, it's also less interesting.

Both games, though, suffer from the same fundamental problem, that no amount of polish could fix and elevate into "good" territory. The randomized level design (not to mention the unpredictable gameplay mechanics and sometimes unresponsive controls) just isn't conducive to stealthy, tactical gameplay. Sometimes you can sneak around Nazis on patrol, sometimes that just isn't possible, and to compensate, both games offer tools that can completely trivialize the task - uniforms in the first game, and passes in the second.

I mentioned near the start that bumping into walls is now 80% less annoying than in the first game, due to the much shorter period of visual disorientation. The problem is significantly lessened, but the fact that this is a problem at all still seems pretty strange. This is actually a pretty good summary of the sequel itself - many of the serious problems with Castle Wolfenstein are mitigated, but none of them are truly fixed.

There are also a number of strange, seemingly purposeless gameplay elements, which make me think Beyond Castle Wolfenstein shipped unfinished.

Beyond Castle Wolfenstein did not have nearly as much commercial success as its predecessor, and Muse Software folded not long after its release, having produced only one more game, a preschool-oriented educational title, the following year. Founder Silas Warner would continue active work as a freelance developer, working with MicroProse on multiple Commodore 64 games throughout the rest of the 80's. His final game was Virgin's The Terminator for Sega CD. Though both Muse and Warner are long gone, the Castle Wolfenstein legacy lives on as a forerunner both to stealth action games and to shooters, having bequeathed its namesake to the latter genre's seminal title.