Game 307: The Lords of Midnight

I came into The Lords of Midnight not being really sure what to expect. One of the more famous games of the ZX Spectrum's early years, and one of the few that I find visually tolerable, I had a vague Wikipedia-level understanding that it blends grand strategy with adventure-style gameplay, much like Singleton's War in Middle Earth a few years later, but little idea how it manages this. Brief glimpses of gameplay footage on Youtube hadn't cleared up much either.

The Lords of Midnight's manual comes prefaced with a novella explaining the events leading to the start of the game. I had to share this with "D," who, being an avowed Tolkien fangirl, howled with laughter at almost every paragraph and concluded it wouldn't be out of place among the rash of Lord of the Rings knock-offs that flooded the market in the 70's, except that it's even more badly written than most of them.

Here's a curated, mostly out of context selection of MST3K-style riffs I heard as she read chapter 2, in which the witch king Doomdark sends his flunky Fawkrin (a nondescript "Skulkrin,") to spy on the lord Luxor and his son Morkin.

In the remainder of the novella, "Corleth the Fey," who comes off as an amalgamation of Gandalf, Elrond, and Radagast, turns Fawkrin good by being nice, and then meets up with Luxor and Morkin, joining their ranks against Doomdark. By dawn, they arrive at The Tower of the Moon, where Rorthron, last of The Wise, warns that Doomdark mobilizes his foul armies for war against the unready lands of the Free, and the four of them plan their campaign.

The goal of The Lords of Midnight is to defeat Doomdark, either through military conquest of his seat of power in the Citadel of Ushgarak, or by destroying the object of his power, the Ice Crown, which only Morkin is capable of approaching and must journey without an army to do so (Just. Write. A LOTR game! - "D"). We're told it is possible to focus on one goal or the other, but to experience the "complete epic" requires equal attention to both. The campaign is lost should Luxor fall, or if Doomdark's armies overrun the last free citadel, but a chance of victory through subterfuge will remain as long as Morkin lives.

The four characters, Luxor, Morkin, Corleth, and Rorthron, will independently explore the land of Midnight in search of clues, artifacts, and allies, while Doomdark's armies march on the citadels, his powers growing with each conquest, and on Luxor, whose "moon ring" gives him clairvoyance but also reveals his location. The interface to command them all involves a keyboard overlay and is unconventional by modern standards, but then again what aspect of the ZX Spectrum isn't? 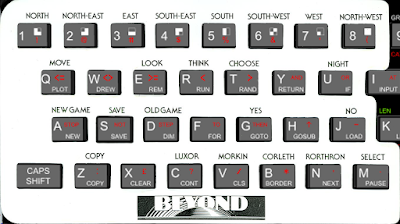 The basic commands here are MOVE, LOOK, THINK, and CHOOSE. LOOK will show a panoramic view of the landscape from the selected character's perspective akin to Might & Magic's outdoor areas, and from there you may choose a cardinal direction to re-orient him. MOVE steps forward one grid-unit space in the direction currently facing. THINK shows a detailed status screen for the selected character, and CHOOSE brings up a menu of context-sensitive actions (e.g. Corleth alone may seek to recruit Fey from their forest homes). Actions, especially moving, cost stamina and pass time, and each character may only perform so many of them before night falls. NIGHT effectively ends your heroes' turn and allows Doomdark to move.

I started up a new game, still not very sure of what to expect. 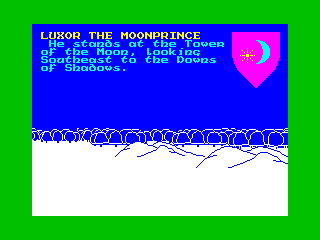 A cassette inlay shows the basic topography of Midnight. 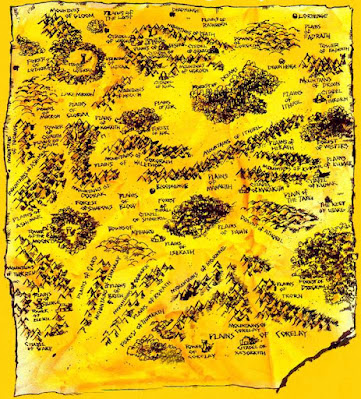 The four lords start at the Tower of the Moon, surrounded by forest. Doomdark's domain is far up north, and as the mountains and forests are impassable to his armies, they must pass through the Plains of Blood to reach the southern half of Midnight. I started by having the four coordinate to map it out. 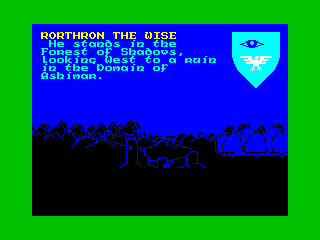 But night fell and he could not approach.

The view here is misleading. The dragons are in the square ahead of you, not the current one. I had Luxor step forward, and nothing happened... until I tried to leave the square. 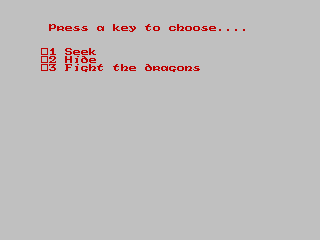 "Seek" did nothing but waste time. I tried "fight" - Luxor was victorious and no worse for the wear. 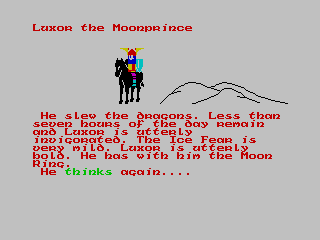 Luxor would continue west on his parallel, fighting two packs of wolves and downgrading his status to "very invigorated" by nightfall.

Morkin and Corleth headed south, and Corleth fought some skulkrins south of the tower (why can't I just charm them?), but his luck ran out in the Forest of Shadows.

Unfortunately, I haven't got the slightest idea how combat works, and the game gives precious little feedback. Every previous encounter thus far simply ended in victory for the lord, and an abstract measure of their remaining stamina, morale, and ability to withstand Doomdark's magic. I don't know why Corleth beat the skulkrins but not the wolves, especially when Luxor before him killed two packs after slaying dragons. The RPG conventions of stat sheets, hit dice, and damage outputs just have no place here.

On day 2, Luxor got eaten by wolves almost immediately. The manual warns us that should this happen, all control over everyone but Morkin is lost, but it was not. Rorthron remained under my control, approached the ruins, searched, and found a "dragonslayer" sword, and found little else past but the Plains of Ashimar and frozen wastes beyond. Morkin followed Corleth's steps, killed the wolves that got him, and then killed the wolves that got Luxor.

On day 3, Rorthron continued exploring the frozen wastelands southward, while Morkin continued southwest past the ruins, killing multiple dragons, and eventually reaching the Plains of Ashimar.

At the end of day 4, the game presented a grim but awkwardly polysyndetic reminder of the urgency of our quest. 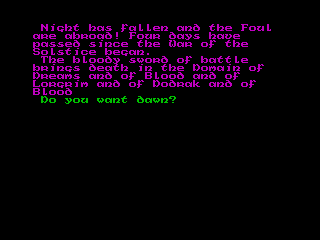 Rorthron and Morkin kept exploring and charting the plains for days. Rothron emerged from the south first into the downs where he effortlessly killed more dragons. Word of battles raging in the northern citadels continued, but R&M kept exploring the plains southward, then eastward once they could go south no more, killing all manner of wolf, dragon, and ice troll in their path.

Some of the landmarks I found during this combing included:

Apart from horses, these landmarks may only grant their benefit once, and only to one character. If Rorhtron investigates some ruins and discovers shelter, he exhausts this benefit, and Morkin will find nothing there.

On day 9, after an untold number of combat victories, Morkin finally became a Skulkrin's snack. 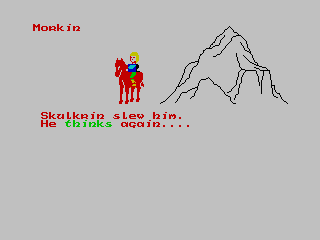 Rorthran continued east, and ran into Lord Rorath, who was quickly recruited. Unfortunately, the game ended at nightfall. 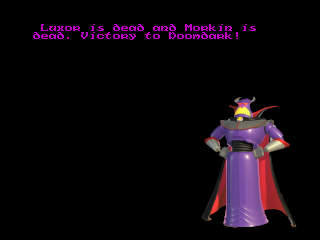 Such an ignoble end to a promising fellowship!

Exploring Midnight row-by-row had been kind of fun. The landscape view is immersive after you get over some perspective weirdness, and you always want to know just what lies beyond that mountain range or in the ruins or tower that's just tantalizingly out of reach, but I suspect you aren't supposed to play like it's a Might and Magic game by exhaustively searching every acre while a war rages north, growing Doomdark's fearsome powers as his victories tally up and potential allies join his dark ranks instead of yours. Yet, I didn't lose the war. I didn't live long enough for that. I lost because I pushed my luck against the wildlife, mainly wolves, just often enough to lose.

I'll have to keep trying, and maybe be smarter next time. Study the map, form a plan, and most of all, avoid fighting unless the character has a special weapon or is Rorthran, who went undefeated. Still, I can't help but wish the fight mechanics were less obscured. It's annoying right now when a perfectly healthy Luxor gets beaten by a pack of wolves identical to so many packs he slew without incident before, and doesn't bode well at all for the inevitable late-game army clashes.

My map so far: 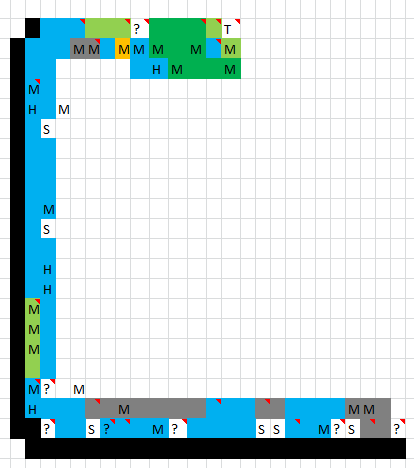