In my last session, I played with the volatile commodities markets of Jondd and acquired a $150,000 chunk of seed money for my mission. I had also discovered the colony I was to settle, and one busload of the cryogenically frozen colonists, which I brought there. But it was time, I figured, to man up and search the other systems to find some things other than money.

"Ferr" was the second system on the bank's list of branches. Might as well go there next, I thought, and transferred my entire account there before taking off in the SunDog and enjoying a pirate-free hyperjump to the starport Industron of the world Ferrwork, second from the sun. 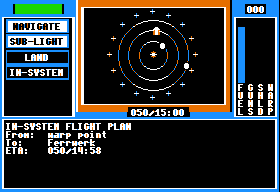 Fuel prices were $142, a bit less than on Drahew, which meant black market goods! I took out $10,000 from the bank here and checked out the local supplier. 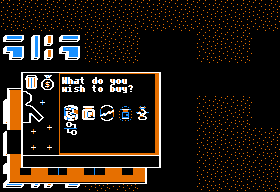 Two new items were here - concentrators and autoslews, whose sellers demanded $6,000 and $3,000, respectively, and I bought one of each. I had no idea what they'd do, but through trial and error, I found that the concentrator could be inserted into the weapons array replacing a photon bridge, and the autoslew into the tactical display, replacing a j-junc module. With money to spare and four component arrays per subsystem, I bought and installed another three concentrators, whose prices fluctuated up to $7,600 and down to $4,800, and I tried to buy more autoslews, but the bartender told me that his man ran out of them.

The local exchange had some goods I hadn't seen on Jondd - Radioactives and gems - but neither was anything that Banville demanded, so I ignored it for the time being.

Planet maps showed there was another city on this world, but I couldn't reach it in the pod. 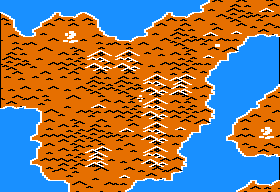 I had $95,000 left after all this and returned to Drahew with my two cryogens, which I delivered by pod to Banville. While on Jondd, I visited neighboring planet Heavy, which had three cities, but only one, Lightning, was possible to explore, and nothing worthwhile was on it.

The next step was to transport materials from Ferring, which meant I'd finally have to deal with pirates. So I returned to Ferring, loaded the pod with one load of silichips and one load of extra fuel. Three pirates attacked me on the way to the warp node, and I bluffed my way out of two but couldn't bluff the third. In combat, my ship, now equipped with concentrators and an autoslew, automatically rotated to face it, but this didn't make hitting it any easier. But my lasers destroyed it in one hit.

A fourth encounter en route to Drahew wasn't so easy. Bluffing failed, and my lasers kept missing, as my fuel drained uncontrollably and I took hit after hit. I arrived, but with barely any fuel, and with multiple expensive parts destroyed, including two concentrators.

Total cost of the refuel, repairs, and parts replacement was $20,000. Just to deliver one load of cargo, out of seven required for the first of nine phases. Utter bullshit, I thought. At this point, I started delivering two loads at a time, and had no qualms about using saves to ensure an acceptable outcome. And making it to my destination on a single tank without taking damage was a very acceptable outcome.

The Ferr system as cleared-out as I could at this point, I moved on to Enlie, a one-planet system with a starport "Plepa" and one other inaccessible city "Tuie.: Fuel here was even cheaper than in Ferr, and on the black market I purchased two new components; "clokers" and ground scanners. The cloker exploded while I tried to install it, diegetically illustrating that black market components aren't the most reliable, but the ground scanner would be a literal game changer as once installed, "city-city" travel became an option in the SunDog's navigational computer. I could go anywhere now, and also eliminate the tedious overworld travel. I flew to Tuie, where there wasn't anything important.

Down to my last $27,000, I checked goods' prices on the two cities, and found making a profit here would be impossible. Gold and gems were pretty cheap, and I tried bringing a load of both around the Jondd system just to see what I could get.

On Jondd itself, I'd make $9,000 profit, not counting the cost of the fuel and repairs, but on Ft. Savon on neighboring planet Heavy, grade A gems from Tuie would sell at a $40,000 profit. I didn't feel bad at all about reloading my save and taking advantage of this, delivering two loads, though on the reload the prices went down somehow, and only earned me about $29,000 profit each. Still, I went back for more, and snatched up some exotic metals when I saw them. Banville only needed rare earths and "sunsuns"now, and I had just over $100,000 in the bank.

More savescumming showed me I could make about $13,000 hauling cheap spices to a town called "The Mines" on planet Ferrwerk. It was probably not worth the time it took, but the Ferr system still needed to be searched for cryogens and supplies, and I found some rare earths at The Mines' warehouse, and "Sunsuns," the last needed item, at Industron starport.

After hauling these back to Banville, the phase was complete, and the city expanded, though none of the new buildings were functional. 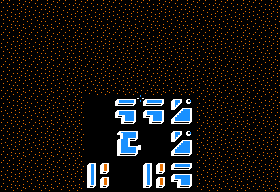 The next phase required:

Three loads of cryogens were already there, so I delivered one right away, and then returned to the Ferr system where one planet, also called Ferr, remained to be fully explored. In the exchanges of its four cities I found and purchased radioactives and cadcams, and in the attached warehouses I found two cryogens. In two round trips I brought it all back to Banville.

This was all getting rather routine, and the ZoomAction interface, intended to enhance immersion, was making this very tedious. Step-by-step, a single trip to Ferr and back went like this:

What I didn't mention yet is that you deal with multiple seconds of disk loading with almost every single one of these steps. With 18 planets in the game, you'd have to do this process at least once on each of them just to locate all of the cryogens, and a few would certainly take multiple trips. The most you can gain from each trip is two commodities, or two cryogens, or one of each, and it's better to take one trip transporting two commodities and another of two cryogens than it is to take two trips transporting one of each, because the latter means dealing with pirates on both of them.

Combat is the only challenging part of this loop, and as I've mentioned more than once before, it really sucks. Just getting to the tactical computer means fiddling with menus controlled with a joystick-driven mouse cursor, and it even lags when you're under attack. By the time you successfully activate it, make a failed bluff attempt, and arm your guns, fighting back is a great way to burn up all of your fuel with missed laser shots. I feel like every single combat, either I nail them in the first volley or two, or I miss all of my shots and run out of fuel. I've won combats and still ran out of fuel before arriving at my destination, which is thankfully an outcome you can survive by making a distress call, but only if help arrives before more pirates do.

Anyway, with the Jondd and Ferr systems fully explored, I returned to the Enlie system where I knew I could find cheap gems for Banville. Exotic metals were sold at the starport as well.

I picked up a new cloker here too, and it didn't explode this time. It turned out to be quite handy on the return trip - make no mistake, using it drains your fuel alarmingly fast and is only worth using on the sublight trip from the warp node to your destination planet and only if you're fairly close once the pirates approach, but it makes you completely invulnerable until fuel it runs out, and still drains less than your shields do at maximum strength. Under the right circumstances, it's the perfect thing to keep you alive until you reach the safety of planetary orbit and can land and refuel.

By the numbers, I've fully explored 3 out of 12 systems, 6 out of 18 planets, 17 out of 50 cities, and am about to complete the second of nine phases of my mission. I'm at most a third of the way done with the game, but have already exhausted its space of gameplay possibilities.