It's years off, but one of the RPGs I'm most looking forward to playing, and of which I have no experience prior, is Dungeon Master by FTL Games. Said by Jimmy Maher to be the best and most innovative blobber since Wizardry wrote the rules on the genre, and that remained so for years until Ultima Underworld obliterated it, FTL Games themselves never surpassed this 1987 landmark, or made themselves known for much else.

Today, though, I'm still covering the big and important games of 1984, and as a discretionary whale, I am covering FTL Games' debut with SunDog: Frozen Legacy, a sci-fi game about space exploration, interstellar trading, and ship to ship combat. I think there might have been another game in 1984 by that description. 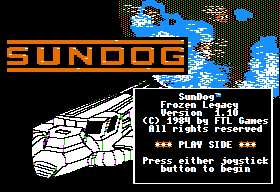 The acceptably well-written manual prologue explains that you are Zed, a miner whose sudden inheritance of his freelancer uncle's ramshackle freighter - along with significant debts - offers a slim chance of escaping generational poverty begat through colonial rule over his homeworld. Attached with the ship's deed is a contractual obligation to complete your uncle's unfinished task of transporting materials and cryogenically frozen colonists to a new chapter of the very culty-sounding "Society of the New Faith." Fail, and the name of the game may well be "SunDog: Frozen Asset," as the ship is forfeit and Zed faced with a lifetime or more of repaying the rest of his debts out of subsistence wages. 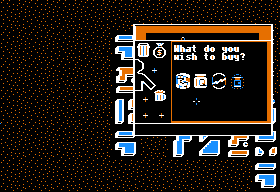 1984 saw the landmark release of Apple's Macintosh "System 1" release, becoming the first mass-market operating system to feature the now-ubiquitous point & click interface with modular windows and icons. This wasn't, of course, a new idea, or the first time such an idea had been seen in commercial software. Apple's primary inspiration, the Xerox Alto's "Exec" software, exhibited these traits in the 70's, and in turn inspired a number of proto-GUIs independently. Some of its aspects had already been seen in games on PLATO, and in home computer games like Pinball Construction Set, Music Construction Set, and Wizardry III. SunDog, too, is one of these games, proudly featuring "ZoomAction Windows" to display statuses, details, and subcontrols.

As the Apple II mouse wasn't a commonly used peripheral, SunDog is controlled by using an analog joystick to move the cursor. Unfortunately, cursor position is based on the joystick's absolute position rather than relative movement. E.g. - when the joystick is centered, the cursor too is centered on the screen or active window, and when pushed all the way to the upper-right, the cursor reaches the upper-right of it. This scheme may have worked well enough with a non-centering Apple joystick, but on a modern gamepad it's a bit cumbersome. A 1986 port to Atari ST added proper mouse support.


Starting a new game, SunDog offers a basic RPG-like character creation screen where you purchase character stats for a fixed sum of points and name him, as the backstory states is your prerogative as a free man. Stats scale include intelligence, dexterity, strength, charisma, and luck, and scale from 30-100 except for luck which starts at 0. The cost per skill point goes up as the value approaches 100, and I have little idea what any of these actually do for you in gameplay, so I distributed points evenly, giving me about 60 points in each. I stuck with the name "Zed."

Walking around the ship, I took note of the inventories and subsystem statuses:

Grabbing a stinger, I went outside to explore Drahew starport. 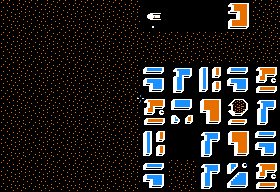 Lots of buildings, most of them nondescript. Where to start?

The most distinctive-looking building here was a bank, which showed I had $31,790 in my account. Zed's uncle must have blown through most of the million he took for the job. You may have the bank transfer funds to accounts on other worlds, but not from them. You could also just withdraw your cash and take it yourself wherever you go, but you run the risk of being robbed.

The building by the ship is a depot, where I refueled, repaired the hull, and filled auxiliary tanks, reducing my account to $25,459.


Exploring town, I found that the only buildings with a function are ones with visible depressions that represent doors, but there are only a few building types, and the color and shape are non-indicative of the service.

Off to the east - Drahew is a pretty big place with about eight blocks of mostly repetitive architecture, I saw a building that looked similar to the supply depot. This turned out to be the commodity exchange. Here, you can't just specify "I want to buy 25,420 rhiolans," but instead have to wait for a favorable deal and snatch it up before someone else does. Or you can sit back and watch the ticker tape to get a sense of the going rates on different goods. Having no idea what constitutes a good deal, I picked the latter option, and observed these deals:

Returning to my ship, I checked the nav computer. The nearest system, Enlie, had a single planet with a starport "Plepa," so I withdrew my funds - transferring to that city wasn't an option - and warped in.

Plepa was distressingly similar to Drahew, with the same buildings, and the same services offering me things I didn't want. Prices for supplies were half that of Drahew, but control nodes weren't available here.

The exchange, which is what I came for anyway, had some offers:

Not much overlap with Drahew prices, unfortunately, though I can see a pattern on the relation of grade to price - each good seems to be worth approximately 90% of the value of the next-best grade. The hand weapons could earn me $5,000, so I bought them along with some antimatter just to see what they'd fetch for back on Drahew. I had to unload my auxiliary fuel to a Plepan warehouse to make room for the cargo.

On the way back, things started beeping, like I was under attack, but I didn't see a way to enter combat mode, and there was no indication that I was taking damage. I did, however, run out of fuel while cruising on sublight back to Drahew. And I was going on a (single) full tank over the shortest warp distance! 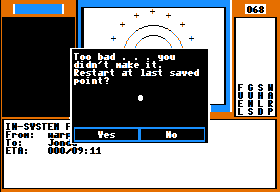 So far, this has been a confusing, and frustrating experience, and the manual is pretty light on gameplay details. I don't even know where the colony I'm supposed to build is, much less how to find the cryogens!

I have some specific gameplay questions, if anyone who actually knows this game is reading.