I restarted the galaxy, now a little wiser to its ways. In this new game, I maxed out Zed's luck - the only stat which can't be boosted with drugs - leaving the rest at their default of 30/100. Right away, I completely refueled, repaired, and refit my space ship. That last task is made rather tedious by the drag & drop interface and other quirks.

Controlling what is basically a mouse cursor with a joystick is already kind of annoying just because of a senseless scheme based on the stick's absolute analog position, where if you want to click on something in the upper-left quadrant of the screen, you've got to push the joystick partway up and to the left and wiggle it around in that vicinity to get it where it needs to be, and if you release the stick so that it returns to center, the cursor snaps back to the center of the active window as well. You get used to it eventually, but it's never convenient, and there are further inconveniences.

Before leaving, I queried prices at the exchange. As I mentioned in the last post, you won't get a complete picture. However, I found that the deals you can view will rotate each time you enter and leave, and by doing this repeatedly, I got prices on ten different commodities at a variety of grades.

Following the advice of commenter MorpheusKitami, I started exploring the planet rather than trying to warp to others. This can be done by leaving the city grounds, and it's best to do this in your pod. I first transferred my food and medicine from the ship stores to the pod - a tedious process that must be done in batches of four items at a time - and then drove off into the wilderness. 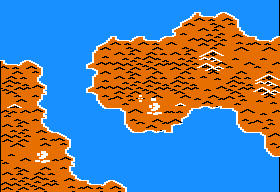 I half-expected random encounters, but found none. The world maps are pretty barren. The only threat here is running out of stamina, which you aren't warned about - you just fall asleep in your pod. You've got to eat too, though if you forget, you'll probably pass out well before you starve to death, and this shows your vitals onscreen when it happens, likely reminding you that you need food. It's better to check your stats manually once in awhile and eat before sleeping.

Exploring around, the first town I encountered was Obburg, which seemed to have the same economic properties as Jondd - same general prices, same black market goods, just no starport to buy fuel at. Repeating the exercise at the exchange, I found these prices:

Running art objects from Obburg to Drahew seemed like it might have the biggest profit yields, but just because you can get B-grade art objects at Drahew for $17,600 a load doesn't mean they'll sell that much, so I kept exploring the planet.

The next town I discovered was interesting. 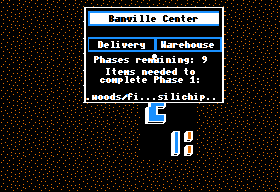 Consisting entirely of an exchange-like complex and a nonfunctional building, I figured this must be the lost colony! Still, my initial goal remained to explore the planet, gather commodity prices, and then use them to make money.

I scouted out the remaining cities - Esposito, Darvilton, and Dramming, and found them all to have the same economic factors as Drahew and Obburg. Esposito had a cryogen stashed in its warehouse, which I noted but ignored. After querying commodity prices everywhere, I compiled a list of planetwide prices using grade 'A' values, estimated where exact prices were unavailable.

From this list, my best bet for making a profit seemed to be running hand weapons from Darvilton to Esposito, so I went there and picked up a load, throwing in some stock embryos for good measure. Then, checking to see what the local sell price was, I was caught by a big surprise - they sold for more than what I paid!

New strategy - buy every offer if it's well below the planetary going rate, and then immediately check the sell price and sell it right back if it turns a profit!

My trade logs over the next session:

I did not sell the stock embryos or furs at a loss, but held on to them with the expectation that they'd fetch a profit somewhere else. This pirate-free, zero-fuel exercise made me $8,800 richer without having to go anywhere, and I had two loads of cargo potentially worth much more than that. But I also learned something about SunDog's cargo economy, even if it raised more questions than it answered.

The buy and sell prices took a real journey! There doesn't seem to be any connection at all between a good's buy and sell price, but I took a look at price trends, using the assumption that each good's grade is worth 90% of the grade above it.

I took one last look at the sell prices of my cargo, and the stock embryos at gone up in price to $6400, the same price that I sold the first load for! But this time I didn't sell, and took my pod on another tour around the planet to check prices.

I sold both of my loads on Obburg for a handsome profit, and then repeated the exercise of buying stuff and selling it back, which apart from the cost of buying two C-grade stimulants which would sell at a loss here, earned me $14,400. Sadly, these stimulants, though much cheaper to buy in Obburg than Drahew, turned out not to sell for a profit anywhere on the planet, and I sold them for a combined $6,200 loss. But I learned that stimulants are a market drain, and soon after learned that so are biochips and pharmaceuticals.

Eventually, I racked up $120,000, my last big haul coming from a delivery of two loads of hand weapons to Dramming, and I decided it was time to get on with the game. I picked up the cryogens from Esposito, plus some more hand weapons (see Ferengi rule of acquisition #292), brought them to Banville, and took a look at the exchange ticker to see what else was needed; a list of materials unavailable on the planet.