I had been slightly misinformed in making my previous assertion that in The Black Onyx, dead means dead. It seems to be the case that if a party member falls in combat, there's no way to get them back, nor anything you can do with them except to delete them from the roster and roll (or recruit) a replacement.

But... in the event of a total party kill, The Black Onyx is surprisingly lenient. Whereas Wizardry saves their status as dead and lost in the dungeon, possibly beyond reasonable hope of recovery, The Black Onyx simply boots you back to the title screen as if you never started the session, and you can just reform your party, minus any experience or gear acquired during said session.

I began such an ill-fated session by recruiting an Utsuro townswoman, only to find at a physical checkup that her stats were dreadful, so I kicked her out and rolled some new replacements who all fared better.

I needed money, clearly, so I tried bullying townspeople, who posed no threat to my party, but not one encounter dropped a single gold coin. Most of them just ran away. And so, I went into the dungeon at the cemetery, where an encounter with kobolds granted everyone a modest amount of coin, but soon after we got slaughtered by a band of adventurers in barbarian-like dress.

Restarting, and discovering that my party was still available in the roster, I took a new approach. I rolled 20 new characters and took them all to the doctor's, five at a time, and kept the ones with the best stats. Even with this approach, none surpassed Betty, one of two survivors of the original team, who had a mediocre-seeming 12 strength and 13 dexterity.

With this new team, I went shopping and prioritized armor over weapons, and while our longevity improved, money remained a problem. You need cash to heal your wounds, and encounters often don't drop any, and what's more is that there doesn't seem to be any way to transfer gold or have one character pay for another's medical bill. If one guy is broke, you have no way to restore his HP until you fight enough rewarding encounters to pay the doctor.

Combat is a bare-bones system. Each round, you either attack, run, or talk. Talking seems like a waste of time, and running is a desperate action that often fails, giving every opponent a free hit on your party, which is something you really don't want to happen if you're considering running. With fighting, each party member selects one of the five opponents at the front, and the only tactical consideration is deciding how much to concentrate or spread your attacks - having all five attack a monster that can be killed in one blow means you waste four hits, but it's better to kill one monster than to wound five.

I'd restart and reload whenever someone died, knowing this isn't like Wizardry where you can't do that, but eventually I had enough profitable expeditions to get everyone leather armor, which greatly improved our survivability. We were starting to gain levels too, which come with stat boosts. By level 3, stats were reaching numbers as high as 25, and combat in the cemetery wasn't challenging any longer. I moved on to the multi-level citadel dungeon.

The first floor wasn't challenging either, with, as far as I could tell, the same encounters seen in the cemetery, nor was the layout very interesting, being largely a linear, somewhat winding corridor, with small empty rooms attached here and there. One neat detail was that in the southeast end of it, a 2x2 square of impassable darkness aligned perfectly with the coordinates of the black tower seen in town, suggesting a foundation buried deep within the earth. Apart from that, though, there were no features at all except walls and doors. Walking around this led to the stairs going down to the second floor.

The second floor still had unchallenging combat, but the gold payoffs were much more rewarding, which was important as the doctor's bills were scaling up with the character levels, now costing $6 per HP. Each trip I made yielded enough gold for multiple equipment upgrades, making the enemies here even less of a threat.

The layout wasn't really any more interesting than the previous ones, just bigger and more maze-like, and without the strict n×n grid structure characteristic of Wizardry and Ultima dungeons. Then again, without a Dumapic spell, this was perhaps a good thing.

Floor 3 proved a big, if uneven difficulty spike. Combats were lethal just as often as they were trivial, with Hellen, whose HP lagged behind the rest of the party, falling the most often. Monsters' tactics were no different from before, they merely hit harder, and the worst of them, a cobra, was always found solitary but could one-shot Hellen if she was unlucky enough to be targeted. So I farmed floor 2 for awhile, discovering that cash-granting encounters were found in specific tiles, sort of like in Wizardry, and that loading a saved game (which can be done anywhere) resets these encounters. Once the party had hauberks and spears (which upon buying will discard your shield), floor 3 was doable, and the cobras typically went down in a single combat round.

Floor 4's combat was not significantly tougher than 3, but it finally introduced some tricks to make navigation and mapping a challenge - teleporters and one-way walls. The entrance room is an 8x9 rectangular room divided into four quadrants, two of which are open floors, and the other two are small mazes. The southeast quadrant holds the black tower's distinctive base and is surrounded by one-way walls, allowing easy egress, but no entrance except by a single yellow door on the west edge of its otherwise one-way perimeter.


The southwest quadrant is a winding corridor of money-yielding combats that loops back on itself, but the northeast quadrant leads to a long series of hallways with four teleporting junctions, three of which teleport you ahead or backwards, and the final one takes you to a new, confusing maze of one-way walls. The stairs downward are found here by solving the maze, but a northern exit takes you through a short corridor with pointless teleporters which all go right back into said corridor, then through a grid of six connected rooms, and an easier maze of one-way walls which exits through a one-way door back into the winding corridor connected to the entrance's southwest quadrant.

The most challenging combats here were against other parties, who are non-homogenous, being equipped with dissimilar weapons and armor. I found it effective to concentrate my attacks on the weakest NPC first, going by armor type first, and HP bar second, in the hopes of diminishing their ranks as quickly as possible, which often caused the rest of them to flee. Sadly, these encounters almost never dropped gold. 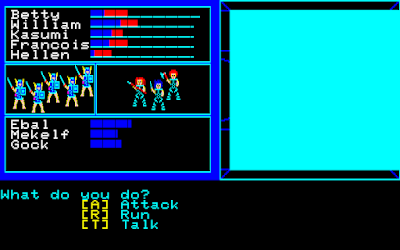 After mapping out floor 4 and going all the way back to town, everyone reached level 6 and had around 3,000 pieces of gold, which, after healing, I spent on Hjelmersson's finest, and then spent the change on drugs. 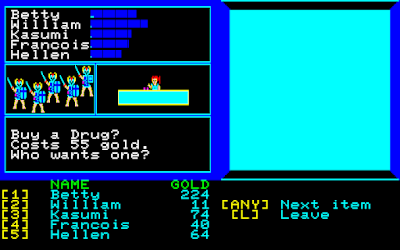