I did it! I caught the mountain wampus. I don't understand how - all I did was touch his pixel with my sprite, which I'm sure I did plenty of times before, but it finally registered for once, and now I can say for sure that this is possible. 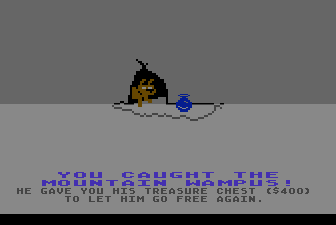 M.U.L.E. features three modes of incrementally challenging play - Beginner, Standard, and Tournament. All are based around harvesting and trading commodities - Smithore to build the robotic MULEs that your space colony depends on, solar energy to keep them fueled, and food to keep you fueled, and all can become brutal mind games of market speculation and exploitation. During the last post, I played a Standard round with "B," "D," and a robot taking the fourth player's control (and winning), but only Tournament mode has the full features and complexities that M.U.L.E. has to offer.

Tournament mode adds a fourth commodity, crystite, which replaces Smithore as the most reliably profitable export. Crystite has no practical use whatsoever, but its average selling price is $100/unit, compared to Smithore's $50. Furthermore, being an intergalactic commodity, its price fluctuates wildly turn-by-turn and is not affected by local surpluses and shortages, and can reach rates up to $150/unit. Smithore's price rarely gets much higher than $50 without deliberate artificial shortages, as selling every turn ensures a steady supply and keeps the price under control. Food and energy can certainly go for rates far higher than $150/unit by pressing desperate players, but players will only buy as much as they need, while the space market will happily buy all the crystite you've got. Hoarding until you can sell it high can make you quite rich, but carries risk, as pirates love to come down and steal it all.

Producing crystite is also a different beast from everything else. Smithore is best mined in the mountains, but can also be found in plains. Food is best produced in the river, and energy in the plains, but crystite deposits are invisible. To locate them, you've got to bring soil samples to the assay office - an action that short turn durations leave little time for once you've installed a MULE or two - which will tell you if the land has any, and if so, how concentrated they are. But this will also inform other players if they're paying attention, and if you sample land that nobody owns with the hopes of claiming it, another player might just be able to claim it first. Once you own land that you know (or hope) has crystite, simply equip a MULE with crystite mining gear and bring it to the plot to start harvesting.

I played a round with "B" on Tournament mode. "D" sat this one out.

For this game, I picked a blue spheroid, "B" picked a green gollumer, and the AI opponents were purple and red.

Before the auction phase, pirates came and stole all the crystite. Of which, of course, there was none. 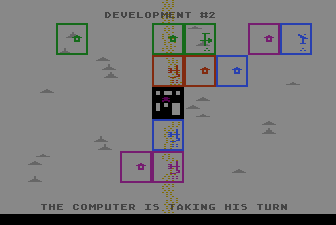 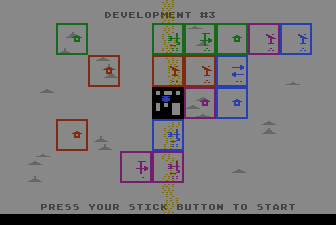 This turn, a fire in town destroyed the whole store's stock! 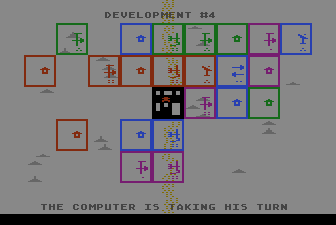 Pirates came again this turn, stealing all the crystite. Oh no. 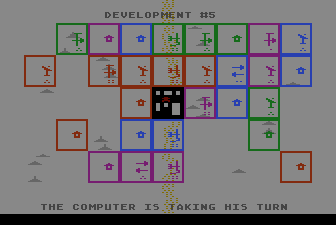 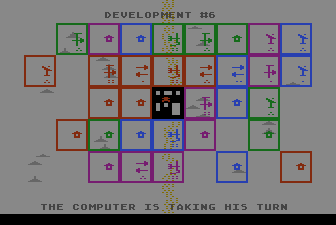 One of Red's crystite mining MULEs malfunctioned and ran away. But he still had three left. 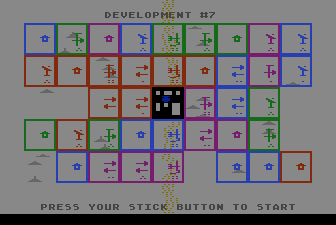 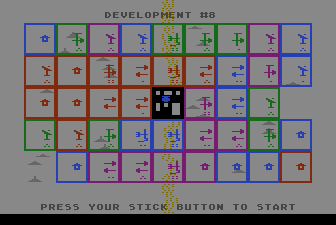 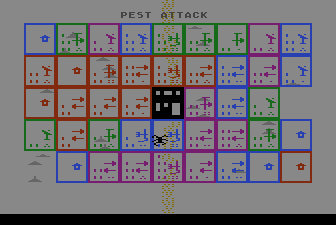 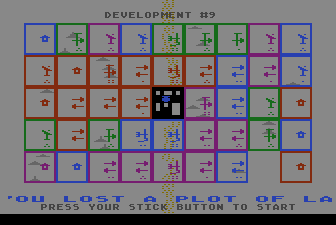 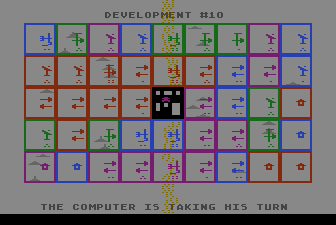 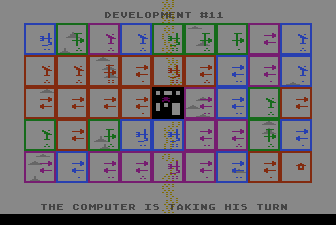 Then something cool happened. Too little and too late to make a difference, but cool nonetheless.

A meteorite landed right in my farmland, destroying the MULE there but leaving a big crystite deposit. 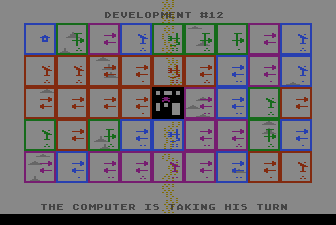 The ship returned, and the final harvest of the game was reaped. 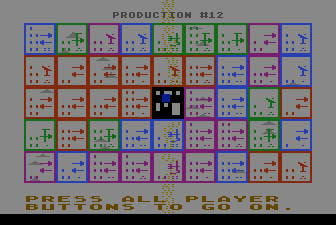 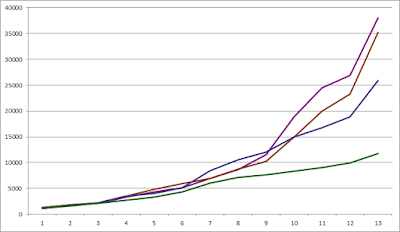 I saw no need to break this down by revenue type. My lead from turns 6-8 came from high food and energy prices, but the late game gravy train was all crystite.

The mechtrons beat us soundly, but is this outcome so bad? Maybe I could have become first founder had I been even more ruthless, allowing the mechtrons' underpowered mining operations to fail rather than selling them any energy, even at highway robbery prices. But despite "losing" we all got lavish retirements - even poor old smithore codger Green. A victory by sabotaging the mechtrons would have lowered the colony's score, and given us all more meager livelihoods. It's a centuries-old critique of meritocratic capitalism - pursuit of personal gain can encourage wasteful behavior.

But there's an important question I sought answers to. How badly does the computer cheat? We've already established that they always win land grabs, which is a pretty unfair advantage already. They move with greater efficiency than seems possible, especially with food shortages. They seem suspiciously adept at assaying, as they identified the last of the crystite deposits by turn 4. They even get extra starting cash. And I had a sneaking suspicion that they get unfairly high mining yields.

To test that last suspicion, I took a screenshot of the turn 11 yields, added a "crystite heat map" indicating where the deposits were located, and annotations to show projected crystite yields.

"D" was right. The computer cheats like a mafia accountant. Most blatant of all is that both red and purple are mining crystite in areas where there isn't any. And while this is possible in the game rules - the adjacency and learning curve bonuses still apply even in plots without any naturally occurring resources, it shouldn't be this high for anyone. For instance, Purple's yield in the top row, third column, gets six crystite units in a barren plot - the learning curve rule should only grant a +3 bonus to a base yield of zero, and the adjacency rule shouldn't apply at all here.

For other crystite yields - I've drawn boxes to show how much should be mined - the computer players overperform more often than they underperform, while for me it's the opposite. Consider too that Purple has an energy shortage, and still produces 47 crystite in ten plots of land, and a "house edge" is challenging to deny.

In spite of all that,

It's been slightly longer than a year since the last time I awarded a harpoon, but M.U.L.E. deserves it. Economics made fast, fun, and accessible on a 48KB machine, with only the most rudimentary of BASIC predecessors to draw influence from - who would have thought it possible? Equally impressive is how it teaches market economics lessons - nothing as in-depth as Cartels & Cutthroats but nonetheless ones that apply to the real world - in an organic manner through gameplay experience. Supply and demand, speculation, economies of scale, diminishing returns, market failures, interplay between cooperation and competition, and all without a single lecture or explanation. You learn through experience. Its simple-looking exterior hides an incredible amount of depth and breadth of strategy. Forget Monopoly, or even Settlers of Catan - nearly 40 years later, M.U.L.E. kicks.

It's entirely possible that I may revisit M.U.L.E., should I get a chance to play it again the future, and that the game proves interesting to write about. For now, though, I am moving on.