It's been awhile now since a Sierra game was the focus of a post. I covered games from their "Hi-Res Adventure" series in my 1980 and 1981 phases, but skipped the company's 1982 output almost entirely, save for Ultima II which isn't often thought of as part of the Sierra canon. It's not as though Sierra had been idle; apart from Roberta Williams' beastly adventure Time Zone, they also produced some odd half-dozen arcade-style games for Apple II, VIC-20, and Atari computers. Though they'd become mainly known for adventures in the years to come, and indeed, their original releases had been Colossal Cave-inspired adventures from the start, an awfully large portion of their early products were these obscure, now forgotten arcade-like computer games.

By 1983, a few of them, though not exactly iconic, are famous enough to qualify for whale status, and a playthrough for Data Driven Gamer. The first qualifier, a maze runner called Oil's Well, is clearly based on Tago Electronics' Anteater, which I will play first as an ancestor.

I get a weird European-like vibe from this game, although developer Tago Electronics appears to have been based out of Grand Prarie, Texas. There's not a lot of info about them on the Internet, and MAME only lists two releases. Anteater feels technically outdated, even by 1982's standards, being based on Galaxian hardware. The titular vermilinguan you play as is this huge, lumpy, awkwardly animated background object taking up a signficant portion of the screen rather than being a conventional sprite, but you don't control it directly - rather, you guide its infinitely-extendable tongue through a maze-like ant colony, scooping up ants, worms, and dots as you try to avoid getting bitten on the dorsal surface. 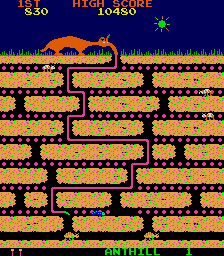 Your main goal, as you wind your tongue through the maze, is to eat all the dots, Pac-Man style. Ants are your main threat - you can eat them by moving the tip of your tongue onto them, but will kill you if they touch any other part of it. You'll be constantly retracting your tongue to avoid this, and the deeper you go, the trickier it gets to manage. Worms are generally less dangerous, as they will pass by your tongue harmlessly, unless your tip touches their head. You can eat them by grabbing from behind, and sometimes eat them by carefully timing a grab around a corner, or just let them pass. Eating lots of worms is crucial to scoring lots of points. Their biggest threat to you is in area denial, as sometimes they can make retracting your tongue dangerous.

Lastly, if you don't finish the level before the sun sets - and it's virtually impossible to do this - a spider emerges, which, like the worm, only kills you by touching the tip of your tongue. Unlike the worm, there's no way to eat it, and it tends to follow the path of your tongue, making it so that if you retract, you die.

There's one defense, though - the ant queens live at the bottom of the colony, and eating one kills all of the ants, worms, and spiders on the screen. Since this is the only defense against spiders, I found it best to save the lower rows for last, where you can quickly munch on a queen when needed and use the few seconds of safety that this buys you to finish off the dots.

GAB rating: Average. Anteater's yet another game one may summarize as Pac-Man with a twist, with a slower, more methodical pace. Sometimes - see Lock 'n Chase for an example - it works out, and you get a smart, strategic puzzle challenge. But Anteater doesn't do enough - the gameplay is basic, the maze layouts are boring, and it just feels unexciting rather than thoughtful.

There's oil on your land. Great, you're rich! But the oil barons know, and they've sent armies of goblins to sabotage your drilling operation. Using a retractable drill claw, you've got to drink your milkshake before they do.

So, this is just Anteater with an oil drilling theme, right? Well, sort of. The controls are heavily tweaked - manually reversing, for instance, is impossible; you can turn or extend with the joystick, but the only way to retract is by holding the joystick button, and you retract FAST. The various "oozies" assaulting your pipelines are faster and more aggressive to compensate for this, making the gameplay quicker and more difficult than its leisurely inspiration. Often you've got to take chances - can you grab that last, tricky to reach bit of oil and still have time to retract the claw before an incoming monster smashes your pipeline? You retract very quickly, but not instantly!

Oil's Well also adds a power pill which grants you a few seconds where everything but you slows down. Unlike in Anteater, where the late-appearing spider encouraged me to save the bottom rows by the screen-clearing queen ants for last, I would try to get the power pill as soon as I could, to clear out the trickiest rows without pressure. 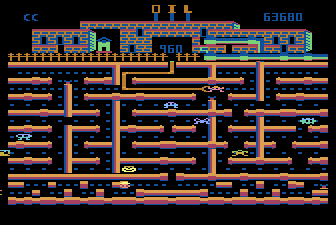 Oil's Well has a total of eight levels, and the further you get, the more visually interesting and maze-like they are. Figuring out efficient paths on the later levels becomes imperative.

I beat all of the levels fairly on the middle difficulty, "unleaded," which was already pretty challenging. But set the difficulty to the highest one, "premium," and you can hear Big Oil chuckle.

This should have been called "Jet A-1." The oozies here come at you fast and relentlessly, and you've got to learn how to twist and turn your pipes pretty efficiently (and, sometimes, how to retract at the last nanosecond), because chances to reach into the longest, deepest tunnels without being forced to withdraw are few and far between. Aggressively pursuing the bonus goblets is crucial too - every 10,000 points gets you an extra life, and you'll need them.

I had to use a single save state to beat all of premium mode's levels, and it isn't concealed in the video.

GAB rating: Good. Oil's Well is a big improvement on Anteater, and the fix was almost shockingly simple - just make it faster and make the level layouts more interesting! Despite some randomness - your windows of opportunity depend on having long enough breaks between oozie waves - there's a good overall difficulty balance, which tests your dexterity, timing, strategy, and greed, and without being excessively unfair about it, and the pipeline-based gameplay gimmick makes it stand out in an ocean of Pac-Man clones. I had fun playing it without the bias of nostalgia, and give Oil's Well my recommendation.