When I planned out the 1982 phase of Data Driven Gamer, I didn't realize there would be so much Apple II pinball involved. Pinball Construction Set and Night Mission Pinball are the only whales in that category, but to the former, Bill Budge's Raster Blaster and Pinball turned out to be important predecessors, and David's Midnight Magic was arguably the most prominent of Broderbund's early in-house titles.

The best, it turns out, was saved for last, as Night Mission Pinball frankly blows the rest of them away both in terms of physics and table design. I can't tell if having sifted through so much comparative mediocrity helps me to better appreciate this game's improvements, or if I appreciate it less it because I'm completely sick of pinball video games by now.

I did laugh a bit when I saw the table design.

Where have I seen this before?

Although I don't know Pinball Construction Set's precise release date, I think it's safe to assume Budge lifted the design from Night Mission and not the other way around. TVTropes claims that Night Mission is based on Stern's Flight 2000, and although I can see some similarities (the lighted ramp on the left is a dead ringer), it's clearly not a copy+paste job to the same extent that Raster Blaster and Midnight Magic were of Firepower and Black Knight.

The pinball action finally feels right. Again, I'm not the best judge of what passes for realistic pinball physics, but to me this feels about as good as Windows 3D Pinball. Previous games fell short of that standard, but until now I had no idea it was possible to do that on a 1 MHz, 48KB machine.

Bumping the table also feels pretty good physics-wise, but as with other games, it's not easy at all to reach for the keyboard while gripping a paddle in each hand. The only times I ever felt comfortable doing this was when the ball was above the N-I-G-H-T lanes and I might nudge the ball into one of them, and even then this felt risky. Each nudge also has a random chance of tripping the tilt sensor, and your first nudge is just as likely as your tenth. You can play entirely with the keyboard instead of the paddles so that you can reach the bump keys more easily, but I wouldn't recommend this. Keyboard-only play loses the ability to sustain a flipper hold - it seems the Apple II's keyboard can only tell when a key is initially pressed, and not when it's being held down or released.

And the table itself? It's pretty sweet. Unlike all of the other pinball games I've seen on the platform, this has a recognizable and well-realized theme - of a WWII RAF strategic air raid - and has reasonably decent sound effects of droning engines, falling bombs, crashes and explosions throughout gameplay. The video table doesn't do anything that isn't possible on a real one, but with about 20 interactive gadgets, targets, lanes, and a dozen table lights and indicators, this is the most complex one I've seen yet. The high gadget density does mean less flipper action than, say Raster Blaster, but I'm okay with that.

If you can complete the N-I-G-H-T lanes, you'll activate wizard mode, where the ramp lights up and you can shoot balls into the dive bomb chute in an attempt to drop your bombs for big points. Afterward, completing the F-L-Y target sequence will turn the bomb chute into a ball holder, which can hold up to four of them for multiball mode. There are also a number of ways of winning free games - activating the D-R-O-P lanes, getting a high score, getting the match score (which is rigged, just like in a real pinball machine). All pointless, considering games are free anyway. 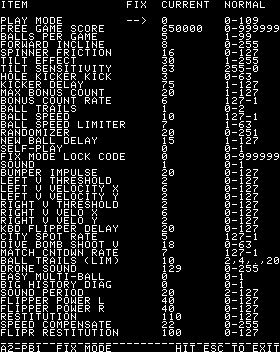 Night Mission also features a "fix mode" for adjusting ingame parameters. Make no mistake, this is not a user-friendly WYSIWYG table designer like Pinball Construction Set, but a developer's tool that subLOGIC simply decided to leave in the game. The 11-page "adjustment manual," included in the box alongside the much shorter standard one, notes as much, pointing out that some of the settings were meant to help the developers gather data for debugging their code, and that some settings can crash the program at extreme values or combinations. You can't design or adjust the table, but while Pinball Construction Set had only four world physics parameters adjusted by simple slider controls, Night Mission's got 40, most of them adjustable in integer ranges from 0-127 or beyond.

All of this is pretty overwhelming, and the standard game manual makes no mention that this mode even exists. There are ten preset game modes on the disk which simply represent different combinations of fix mode settings, but I found the one called "Competition mode" to be the most playable and the most fun. I didn't spent a lot of time messing around here, but found it pretty neat to see an early example of developer's toolkits being bundled with the game, and it stands as a very interesting contrast to Pinball Construction Set's player-oriented approach, being simultaneously more powerful and less powerful.

GAB rating: Good. I'm still not a pinball fan, but I had fun with this one, and that's more than I can say for any of the other such titles I've delved into this past few weeks. Who would have known that this fast-paced and polished arcade game would come from a company mainly known for an austere flight simulator? In the manual, SubLOGIC claims that they spent countless hours playing, observing, and measuring the physical aspects of pinball and did intense number crunching to ensure their physics model produced accurate results, and I believe it. The table design is original, fast, and fun to play, and I happily promote Night Mission Pinball to the ivory deck.
Email ThisBlogThis!Share to TwitterShare to FacebookShare to Pinterest