Imagic released Atlantis in July 1982 and its sequel Cosmic Ark in August 1982, both for the Atari VCS initially. They were developed concurrently, Atlantis by Dennis Koble and Cosmic Ark by Rob Fulop, both of them former Atari programmers. It would be weird to play one game and not the other.

But before I do, here’s a roadmap of known and inferred influences to these games: 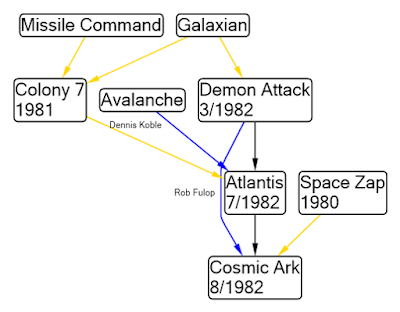 Released in 1981 by Taito, arcade-history.com claims influence from Atari’s Missile Command and Tekhan/Centuri’s Pleiades, which itself was intended as a sequel to Phoenix, a game which Atari claimed Demon Attack had imitated to the point of copyright infringement, but I didn’t see the resemblance.

And while I find the Missile Command influence is obvious and significant – you defend your colony with weapons aimed by crosshairs which explode radially on reaching altitude – the Pleiades connection seems superficial at best. Pleiades is a multi-stage shmupoid like Phoenix, and while the first stage appears to be about defending a city from an alien invasion, and is visually similar to Colony 7, the defense aspect doesn’t really factor into play.

Colony 7, on the other hand, is all about city defense. Unlike in Missile Command, you have unlimited missiles, so fire away. The targets are quicker, more numerous, and less predictable, but your missiles, which are dual-fired from turrets on the side of the screen, fly faster and with little cooldown. The reticle is controlled with a joystick rather than a trackball. You also have some additional weapons; three Mega Blasters which explode with a much larger radius than the stock weapon, and a single screen-clearing Eradicator rocket. These weapons are visible below the ion shield and can be destroyed by enemy fire, as can your turrets.

There is also the option, at the start of the game, to purchase “extended weaponry.” Most of the sources on the Internet that try to explain what this does get it wrong. It doesn’t give you any additional weaponry, but rather it expands their blast radii, which is most noticeable with the stock missiles.

This makes the game pretty easy, but I’m not one to turn down an edge if the game offers it and doesn’t explicitly tell me this is an easy mode. That said, once I had figured out how the game works, I made it to wave 14 on my very next try, and I’d like to think that I failed there not because it was too challenging, but because my attention span was waning from the monotony.

GAB rating: Average. The creativity involved in mashing up shmupoid and Missile Command gameplay is commendable, but it gets old pretty fast, and as it lacks Missile Command’s more advanced mechanics as well as any ability to move around as you would in a normal shmup, there isn’t much depth beyond figuring out which targets to prioritize and when to use your super weapons.

I played this game on real hardware at ACAM. There’s not much to it – you don’t move, but you can shoot in four directions at targets that pop up, shoot projectiles at you, and at the end of each wave, spin around you. It’s a lot like whack-a-mole, actually.

There’s no cooldown to your attack, so once the aliens start to appear and vanish faster than you could possibly react, blast away in the hopes that you might score some lucky kills. Focus on the mines, but don’t stop shooting, ever.

That was my first and only attempt in MAME, and didn’t feel much of a need to replay for a better score.

GAB rating: Below Average. Standing still and waiting for targets to appear just isn’t all that interesting.

Atlantis has apparently been thriving under the sea for centuries, but one day, the Gorgon Fleet arrives, intent on demolishing the city. You command some defenses - two angled turrets and one "command post" with an upwards-aimed gun, but it’s only a matter of time before you are overwhelmed and Atlantis sinks again.

There are four game modes, and unusually for an Atari game, difficulty switches do nothing. Game 1 is the standard mode, but the others are:

These extra modes didn’t sound especially interesting, so I stuck to mode 1.

You control three defense facilities – one command post in the center, and two sentry towers on the left and right side. 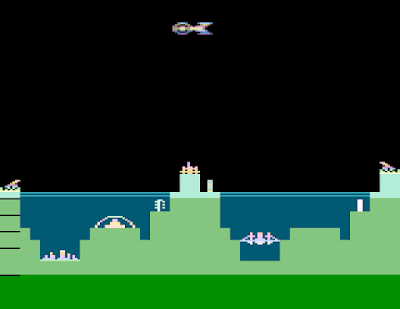 Unlike in Colony 7, the guns can’t be aimed; your available actions at any given moment are simply to fire the center gun, fire the left gun, fire the right gun, or to do nothing. The center gun is ostensibly the most useful one, but its kills are only worth half the points, which you need in order to repair the city, and it tends to get blown up really fast.


The right gun is higher than the left, and farther away from the center, so the cross-fire isn’t exactly symmetrical. 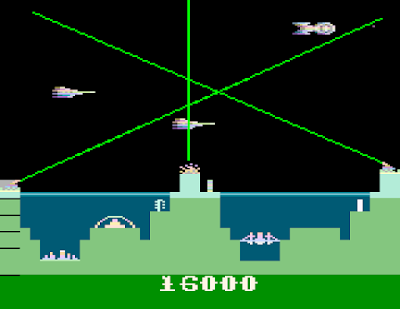 So, what can we learn from this? Well, apart from showing that the center gun is best, it shows that high-altitude planes must be targeted with the gun facing the same direction, and low-altitude planes are best targeted with the gun facing its opposite direction. But it doesn’t take long before the planes can fly faster than your own bullets, making the high-altitude ones essentially invulnerable unless you pull off a lucky blind shot. It’s much easier to shoot them head-on at lower altitudes.

One crucial thing to understand is that the Gorgon planes always start at high altitudes, and any that make a pass across the screen without getting hit will instantly wrap around it and descend a level. Anticipation is the only way you’ll hit them after the first few slow and easy waves, and understanding their movement patterns buys you more time to anticipate.

GAB rating: Average. It reminds me much more of Atari’s Anti-Aircraft, a game I didn’t care for at all, than of Taito's Colony 7. It looks really nice for a VCS game - it even seems to be made with a 4:3 aspect ratio in mind - and the defense-oriented gameplay is certainly more interesting than the passive, boring shooting galleries seen in Anti-Aircraft and Air-Sea Battle. The bleak, menacing atmosphere as your city is bombarded into rubble stands out especially, and feels less abstract but no less grim than the desolate landscapes in Missile Command. But it’s pretty shallow and repetitive, with little room for decisions and tactics, and also suffers from a bad feedback loop where once the game is hard enough that you start making mistakes, you’ll spend most of your play time without your most effective weapon, and have just the side-turrets and no gameplay decisions to make at all except for timing your shots correctly.

Once Atlantis is destroyed, a vessel with its last survivors flies off into space, setting up the perfect lead-in to:

The manual’s only explicit reference to Atlantis is that it describes the Cosmic Ark’s crew as “Atlantean,” but this is enough to infer that this is a direct sequel to Atlantis. Oddly, though, the Ark’s mission isn’t to colonize a new home for the Atlanteans, but to rescue creatures from a dying solar system. This raises a few questions – just how much time has passed since the previous game? Is this the same vessel that escaped Atlantis? Did they settle somewhere in between games, or is the Ark’s crew truly the last of the Atlantean people?

Few answers are found in the manual or game, but the gameplay involves two phases. First is a Meteor Shower phase, which is a simplified version of Space Zap, where meteors approach from four directions and you zap them with your joystick. A missed shot will cost you energy and time, so you can’t spam as you could in Space Zap. The difficulty switch controls the size of the Ark, with position ‘A’ making it bigger, making it harder to zap the meteors.

After surviving a meteor shower, the ark will enter planetary orbit and launch a shuttle, and the Rescue phase begins. Two creatures pace around the landscape, and you must abduct both of them with your tractor beam while they try to evade you. An alarm will sound when the meteor showers are about to begin again, and you must return to the Ark promptly or it will be destroyed. After the first rescue, subsequent planetary surfaces will have defense laser turrets which move up and down and fire at predictable intervals.

Eventually the Ark will be destroyed by the meteor shower, rendering the whole mission pointless. An escape shuttle will fly off into space, setting things up for a continued storyline, but Imagic abandoned this arc.

As with most Atari games, there are multiple game modes:

I didn’t see much point in modes 2 or 3. The alternating two-player mode gives each player responsibility for a different round type, but it’s still just alternating play.

The hard variant modes, on the other hand, are hilarious. Right off the bat, the Meteor Shower round is too fast for me to react. Only with difficulty switch in position ‘B’ did I manage to barely squeak by, only to find this on planetfall:

GAB rating: Below Average. It’s like WarioWare, if it only had two microgames. Standing still and waiting for targets to appear still isn’t all that interesting – you see a meteor, you deal with it by tapping the stick in its direction. Once they start moving faster than you can react, that’s it. Your game is effectively over; there’s no way to compensate for your inadequate reaction time through anticipation as you can in Atlantis. Space Zap had at least a small amount of variety – not much, but more than zero. The Rescue phase is a bit more interesting, but not interesting enough to hold up as its own game, and the two lackluster microgames don’t add up to more than the sum of said parts.

I had heard good things about Imagic before I started this blog, and I am playing them for the first time as I write about them. All of them certainly look nice, and Imagic’s developers must have been wizards to pull off the sorts of tricks they did on the VCS’s limited specs and only 4K of ROM, but Atlantis and Cosmic Ark underwhelmed me in the gameplay department, even compared to other VCS games. We’ve still got Dragonfire toward the end of 1982, and I’m curious to see if it holds up to their reputation.
Email ThisBlogThis!Share to TwitterShare to FacebookShare to Pinterest
Labels: Imagic