I’m on Team Star Wars. Star Trek is great, and certainly produced far more hours of worthwhile television than Star Wars did for cinema, but Star Wars is special to me. I’m a slightly snobbish cinephile; I used to watch Godard reel-to-reel without subtitles, my Blu-Ray library is mostly made by Criterion, and I know about Orson Welles films besides Citizen Kane and The Transformers. But I don’t think any movie ever affected me in the same way as Star Wars, or ever will. It’s not my favorite movie. It’s not even my favorite Star Wars movie. But it is a master class not just in storytelling and memorable, relatable characters, but also in visual worldbuilding, which is why I think it utterly engrossed me. Other films had taken me into the past, or to exotic parts of the world, or even outer space, but Star Wars alone took me to a galaxy far, far away, ungrounded in anything of this world except for its relatable characters, and without ever feeling like it was on a sound stage, like so many fantastic adventure films before it had. The sets, costumes, vehicles, equipment, buildings, special effects, and cinematographic flourishes all contribute to a sense of visual identity, so complete and singular that I can look at something as mundane as a prop crate and know that it belongs in the Star Wars universe.

And I think that this visual identity is a big part of why Star Wars has lent itself so well to video games, which perhaps have an even greater impetus to arrest the mind’s eye than conventional cinema does. The most successful video games are instantly recognizable from a mere screenshot to even a casual gamer, and this holds true whether viewing at a flat, static single-screen like Frogger and Tetris, or a vast 3D landscape in Minecraft or The Witcher 3. This must be done without the aid of famous actors, and for a very long time having realistic visuals was out of the question, so having a distinct style was a must. As Star Wars already has an immediately recognizable style, adapting it to a video game is more a mechanical exercise in massaging familiar visuals from the hardware available, than a creative one of inventing striking visuals that stand out.

Given the massive popularity of Star Wars and its sequel The Empire Strikes Back, and that their numerous action scenes were well suited to the simple arcade-style video games of the day, it’s hardly surprising that LucasFilm would want to extend its already enormous merchandising scene to video games. Parker Brothers, an established toy company, had exclusive rights to manufacture and sell Star Wars toys. Despite having no experience whatsoever in developing video games, they felt this exclusivity extended to video games, and secured the commission to release the first official Star Wars video games, which I must imagine was a major frustration to Atari.

This one is based on the Battle of Hoth, which I estimate is the second-most frequently adapted movie scene of all time, after the assault on the Death Star (I’m guessing Tron’s light cycle race takes the #3 spot). It looks and plays like Defender, with AT-AT’s as your only enemies. 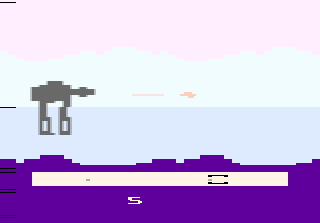 No harpoons and tow cables here – you destroy them either by chipping away at their health until they blow up, or by firing a single laser into a tiny glowing hatch that sometimes opens up for a very brief period. Let them reach the far edge of the terrain, and they’ll destroy the generator and end the game. Meanwhile, you can sustain up to five hits from their cannons, but every hit after the first has the potential to kill you, and the more damage you accumulate, the more likely that the next one will be your last. Field repairs are possible by landing in a valley, and every two minutes of play, you become blessed with The Force for a few seconds, the Star Wars overture plays, your speeder glows, and you will take no damage until it wears off.

As with most VCS games, there are several game modes, 32 to be exact, covering every possible combination of the available gameplay options. Effectively, there are four possible starting difficulties, two boolean gameplay features (enable/disable smart bombs, which make the AT-ATs fire tracking missiles at you sometimes, and enable/disable solid walkers, which make your speeder crash when touching the AT-ATs, severely damaging them at the cost of a life), and a pointless two-player option. In addition, setting the difficulty switch to 'A' makes the repair valleys a bit trickier to land in.

Because I find that these games are rarely improved by having fewer gameplay options, and that I could manage on the hardest starting difficulty, I played most of my games on variation 16, where the difficulty is at the fourth level, smart bombs and solid walkers are enabled, and with the difficulty switch in the ‘A’ position.

As in Defender, your speeder has a sense of inertia to it. Reaching a high speed takes some time, and coming to a stop or reversing direction of movement takes time too. Getting hit knocks your speeder away from the blast’s epicenter in an impressive way that really conveys the power of the enemy’s blaster cannons. You don’t often see effects like that in these games; your typical shmupoid just has your ship explode if it so much as lightly brushes up against a bullet.

The AT-AT’s are your only enemies, but they are damage sponges, absorbing up to 48 hits before going down, and they change colors every 8 hits, which helps me less than intended thanks to my colorblindness. I found it best to approach them from the front, keeping as far away from them as possible while firing on them repeatedly, and my maximizing my distance from their guns, I’d maximize the amount of reaction time available to me to move out of the way when they fire. This didn’t always work, but it worked better than trying to blast them from behind, as the speeder seems to stay somewhat to the right of the center of the screen, making it dangerous to stay on their tails too closely.

Sometimes I’d get a lucky hit on an open hatch, but this wasn’t common at all. Hatches opening on the rear were great; I could just fly over and around and blast it from behind. Most of the time, though, the hatches opened on the front in a position that was blocked by the AT-AT’s head, and I’d be more likely to take a hit from not paying attention to the AT-AT’s blasters than to successfully slip a shot into that narrow opening. As for the smart bombs that often emerged, they track you relentlessly, much like the baiters in Defender, and likewise weave around in a random fashion that makes hitting them tricky. You can’t flip your orientation instantly like in Defender, so the trick of leading it and reversing directions to blast it won’t work. It’s better to fly out of the AT-AT’s blaster range and then play matador with the bomb, letting it circle around you, weaving out of its way with each pass while moving as slowly as possible so that you can quickly change direction to shoot at it, and hope that you get a lucky hit in before it does.

GAB rating: Average. It’s well programmed, looks nice for a VCS game, controls fluidly, and strikes a good balance between your objective of survival, and the urgency of eliminating AT-AT’s before they overrun the base. But there’s no getting over an unpleasant fact – this is as monotonous as VCS games get. A far cry from Defender’s intense arcade action, with its variety of enemies and distinct attack patterns and behaviors, all you do in this game is shoot identical and tanky AT-AT’s while dodging their fire. It wasn’t bad, but I have little desire to ever replay it.
Email ThisBlogThis!Share to TwitterShare to FacebookShare to Pinterest
Labels: Parker Brothers