Irem was founded as IPM Co. in 1974, and their earliest credit on Mobygames is 1978’s “Power Block,” which at this point I’m not even going to bother verifying that it’s a Breakout clone. It isn’t listed in MAME in any event. Wikipedia lists two Mahjong games and a “Nyankoro,” but without any identifying details these aren’t especially useful credits.

MAME’s earliest attribution to IPM Co. is Andromeda, but it isn’t fully playable yet.

Their next credit is IPM Invader, a 1979 Space Invaders clone with barely anything even slightly interesting to distinguish it from the original game.

Soon after its release, they changed their name to Irem, and their next few credits are similarly uninteresting.

Their first game of 1980, Sky Chuter, appears to be original.

But it isn’t good.

At first it looks like a somewhat novel Space Invaders knock-off – you control an anti-aircraft turret and fire at waves of bombers, who sometimes drop parachuting landmines. But these bombers are much faster than the invaders, and you can rarely afford to ignore the landmines – let them land on the ground and they’ll stay there until you run over them. A landmine in the middle of the screen effectively cuts off half of the playfield from you. Between their speed, the constant distraction, your gun’s slow speed, long cooldown, the bombers’ deceptively tiny hitboxes, and the game’s annoying tendency to drop your fire command when a lot is going on it’s nearly impossible to keep pressure on them, which means more pressure on you.

But the real game killer is that no matter how many planes you shoot down, and no matter how perfectly accurate and efficient your fire is, the final part of the wave has planes come in at the lowest possible altitude.

At this point, the red bombers are so close to the hypocenter that you haven’t got a prayer of shooting down their mines, or avoiding their normal bombs should they happen to drop one while you’re even slightly beneath them. Without an extreme degree of luck, and I didn’t manage this even once, you’re dead, and the wave restarts from the top.

MAME lists this as a clone of “Red Alert,” but WW III appears to be the original. 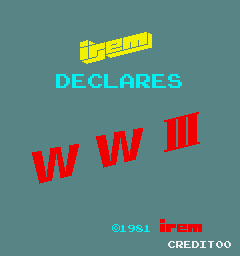 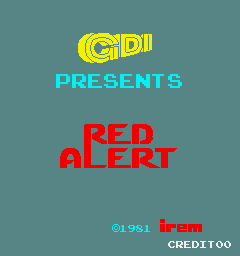 I opted to play WW III on the off-chance that Red Alert also has any gameplay differences to go with its audio additions.

WW III is clearly expanding on the ideas of Sky Chuter – most evident in the helicopter stage – and with greater success. And it’s also obvious that Missile Command had some influence here – there’s the theme, there’s a red megabomb that when shot, explodes in the sky in a radial pattern and can take out multiple targets, and of course there’s this:

Apart from the theme, the game plays like Galaxian with more variety. Irem’s earlier title UniWar S was, in fact, a Galaxian ROM hack, which added variety in the form of multiple stages with different enemy types, formations, and tactics.

The first stage involves shooting down a 20-bomber wave. 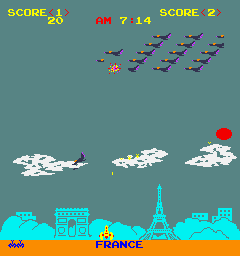 The bombers are fast but move predictably, and their bombs are fairly easy to dodge. You haven’t got much time to clear the wave though – at 4:00 PM, about 50 seconds of gameplay, the bombers leave and a game-ending MIRV drops. Hypothetically, you could shoot down every warhead before any of them land, but this is much more difficult than just shooting all the bombers in the first place.

I don’t really see why they call off the MIRV once you shoot down the bombers – presumably this is a nuclear ICBM, and even the earliest ones were precise enough to devastate Paris without manual guidance.

The second stage is about shooting helicopters, and this is where the Sky Chuter roots become clear. 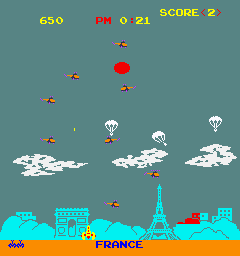 Thankfully, the parachuting bombs just explode when they hit the ground, creating this odd effect where a section of the background briefly turns red, and will kill you if you are too close to it. The helicopters buzz around in unpredictable patterns, making them trickier to hit than the bombers.

It’s not terribly difficult either. The parachute bombs are the helicopters’ only means of attack, and only so many can be on the screen at once. They don’t seem to target you, so it’s simple enough to thin out their ranks by picking off stragglers while the densest clusters drop useless bombs on the city far away from you.

Then night bombing starts and things get real. 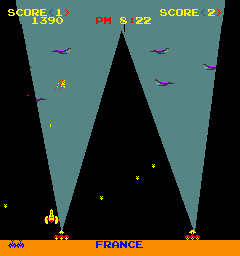 Here, the bombing is much heavier than in the daytime, they fall faster, and you can only fully see the bombers as they pass through the searchlights. Fortunately, their bombs are visible in the dark. Unfortunately, the bombers can take out your searchlights, and with the bombs being dropped so heavily and with no means of protecting your searchlights except for scoring direct hits on these tiny bombs with your slow-firing gun, it seems like it’s only a matter of time before it happens.

And then you’re stuck shooting bombers in the dark, with only the trail of bombs and the occasional blinking light giving a hint as to their positions. With your shooting accuracy diminished, the bombers you miss will fly at lower and lower altitudes as dawn approaches, until they fly so low that you couldn’t reasonably dodge their bombs even if you could see the craft they were coming from.

Survive the night, which I only managed once, and peace and world stability are achieved forever. 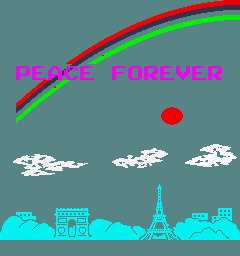 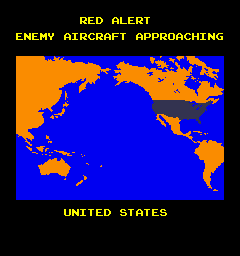 I only managed to save France once, and failed the U.S. phase during the night bombing phase as usual.

GAB rating: Above Average. Kudos to Irem for giving the Galaxian formula some variety, but there isn’t any hidden depth here, and the difficulty spike is extreme.

I wouldn’t have made this inference before starting Data Driven Gamer, but Konami’s Scramble was clearly a major influence on this game. It’s not the most obvious connection; Scramble is an early horizontal shmup, and Moon Patrol is more like a platformer, although it wasn’t informed by any previous platformer-like games as far as I can tell.

But despite the fact that in one game you control a space ship and the other you control a land rover, the similarities are strong and numerous.

On that last point, Moon Patrol does one better than Super Cobra; while Super Cobra had a limit on the number of times you could continue, Moon Patrol lets you pump in quarters until you win. Not a lot of arcade games of the time allowed this; the only other one I’ve played is Vanguard, and even that stopped allowing continues after beating the first loop. Moon Patrol’s leniency, it seems, is limited only by the depths of your pockets.

And they clearly understood that, because dear lord, this game is a quarter muncher. There are only so many ways you can clear the nonstop obstacles, and if you don’t know what’s coming, you really can’t react fast enough. Your forward-firing gun is slow and not effective against large or multiple targets unless you’re moving at a reduced speed. Changing speeds takes some time, your speed affects the height and distance of your jumps, and when you do jump, you have no control until you land. Move too fast while making a jump, and you might slam right into a rock on the other side of the chasm. Move too slow and you might not have time to get up to speed to perform a necessary long jump right after. And the chasms are deceptively wide; if any of your wheels even come close to either edge, you’ll probably fall in, so you really don’t want to cut things too close. The name of the game is trial, error, and retrial at the cost of a quarter.

And even practice may not be enough, as occasionally UFOs start bombarding you and the terrain, leaving craters for you to jump over in addition to any other obstacles that were already there. The randomness of their fire may just force you to maneuver in a way that doesn’t complement the avoidance of the upcoming obstacles.

There are two courses, and the second of the two has a much bigger variety of obstacles and MUCH tighter timing needed to pull everything off, even once you know exactly what’s coming. I managed to get good enough at the first course that I could beat it on a single credit and score thousands of points from finishing it quickly, but didn’t feel compelled to master the second in that manner.

GAB rating: Above Average. Moon Patrol is pretty well designed, well programmed, looks pretty nice, it’s fun, fast, exciting, and has a decent amount of variety considering how long the courses are, but the trial and error gameplay can feel cheap and frustrating.

Also, does the way the moon buggy’s wheels move up and down independently of the chassis remind anyone else of Metal Slug?

Email ThisBlogThis!Share to TwitterShare to FacebookShare to Pinterest
Labels: Irem