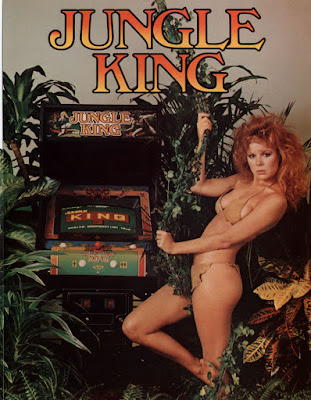 I have to assume that Bo Derek’s Razzie-winning Tarzan the Ape Man, released in 1981, was a big influence on this game, at the very least by revitalizing interest in the character. Jungle King isn’t a Tarzan knock-off – he is Tarzan, right down to bellowing Johnny Weissmuller’s renowned yell in low fidelity at the start of every game. It’s little surprise that Edgar Rice Burroughs, Inc. sued and forced Taito to rebrand later releases as Jungle Hunt, with seriously toned-down iconography.

Perhaps Pitfall! was influenced in a similar manner to a lesser extent – the swinging on vines through the jungle is at the very least an unmistakable homage, and even has a Weissmulleresque leitmotif. Raiders of the Lost Ark seems to have been a greater influence, though, with the South American setting and treasure hunting. Jungle King, in turn, features a stage with boulders rolling down a hill (albeit with you running up the hill), while Pitfall! merely features non-lethal rolling logs. The two games were released so close together than I think it unlikely one had any influence on the other, but the thematic similarities are strong indeed. Even the vine-swinging animations look nearly identical.

Jungle King is still, as far as I can tell, an original gameplay concept. There are four looping stages that can loosely be categorized as “platformer” gameplay, but they all play quite different from each other, and aren’t quite like anything earlier that I’ve seen either. The design seems to anticipate a certain fashion of later console platformers, where stages would introduce new themes and gameplay concepts throughout the playthrough, but doesn’t commit to a common set of controls or mechanics as they often would. 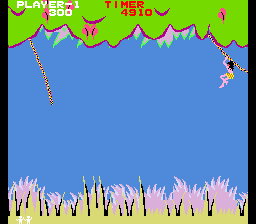 Stage 1 involves jumping from vine to swinging vine, and is easy if you’re patient. The vines have varying lengths and swinging speeds, and may swing back and forth several times before getting close enough to make a good jump. Annoyingly, you can’t climb down to increase your trajectory – all you can do is hit the jump button at the right time. You will slip and fall if you wait too long, which renders the ingame timer kind of pointless. Subsequent loops add monkeys to some vines, which climb up and down and will knock you off if you touch them. 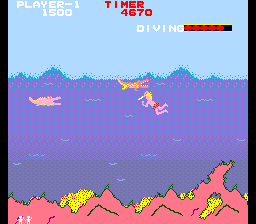 Next, your hair and loincloth change color as you dive into crocodile-infested waters. Stabbing them isn’t too difficult - the hitbox seems to extend a bit above your sprite, so it’s easiest to stab them from below. It’s easy to forget you need to breathe, so surface whenever it’s safe, so that you don’t suddenly hear the low oxygen alert when you’re caught between an undertow and a deadly alligator. Later rounds make the crocodiles move around faster, making it sometimes better to avoid them than to try to stab them. 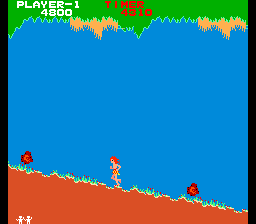 More palette shenanigans as you ascend a hill and jump over rolling boulders. It’s all about timing your jumps to avoid the rocks, though you can also move left and right, which isn’t really needed during the first loop. Bigger boulders bounce higher and are easily ran underneath. You can also duck, which for some physics-defying reason causes the rocks to roll down the hill faster, and is handy for dodging the large boulders in later rounds. 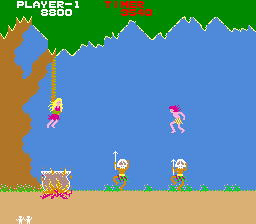 Finally, everything about the player sprite’s palette changes as you encounter some cannibals who move back and forth, and must jump over them at just the right time to not only avoid touching them, but when you jump over the second you have to touch your girlfriend, precariously suspended and being raised and lowered like a yo-yo over a boiling cauldron. If she is too high up when you jump over the second cannibal, you’ll miss her and land in the cauldron instead. Everything moves in a fixed pattern, so if you’ve figured out the timing to clear this once, it will work on each new playthrough. Later rounds have different patterns.

Succeed, and you get an innocent peck on the cheek, and a replay with much more difficult gameplay.

GAB rating: Below Average. Jungle King is, unfortunately, kind of boring. Unusually, there’s no randomness at all, which is a good thing for speedrunners, but a bad thing when the stage-to-stage gameplay is so basic. In three of the four stages, there is no interaction with the game world whatsoever – in fact they are based entirely around waiting for an opportune time to jump, which is performed with a single button press and success or failure is determined entirely on whether you jumped at a good time or not. This is hardly engaging gameplay. And what’s with the constant Jungle King palette switching?
Email ThisBlogThis!Share to TwitterShare to FacebookShare to Pinterest
Labels: Taito