I’m a little surprised that this game hasn’t got half of Donkey Kong’s thunder. Mario’s debut appearance has a very active competitive scene, the subject of the most famous video game documentary of all time, in which Billy Mitchell credits its enduring legacy to its brutality. Meanwhile, Donkey Kong Junior is even harder, with crazier level designs, much more emphasis on platforming, riskier scoring opportunities, but there aren’t nearly as many records listed in Twin Galaxies, and Junior himself seems to have been chucked into the wastebasket of unmarketable Nintendo characters, unseen since Mario Tennis except for cameos.

That said, I don’t like this game as much as the original, precisely because it’s harder, but in ways that I don’t like. Almost everything you do has an annoying and potentially fatal delay. Want to walk off a ledge or drop from a vine to land on a moving platform below? He’ll hover in the air for a fraction of a second before falling – better take that into account or the platform might not be below you when you fall. Transferring from vine to vine, a critical gameplay element, is especially laggy, which is a really bad thing when hazards are moving around at your level in unpredictable patterns. Junior can survive longer falls than Mario could, but as a result it’s more difficult to know precisely at what point a pixel’s height makes the difference between sticking a landing and a fatal fall. A forward jump pushes Junior’s position back a few pixels before he starts moving forward, making the effective distance shorter than it seems it should be, and the slow-slow forward movement can screw up your timing, landing you right into hazards or missing moving platforms.

As with Donkey Kong, the U.S. version doesn’t let you play through all four levels until you reach the third loop, while the original Japanese version has a normal level order, so I played that one.

DKJ opens up with a brief cut-scene as in the original. 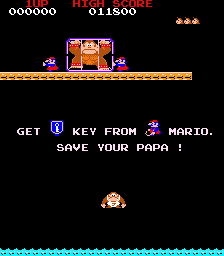 A few things stand out here that I never really thought of before.

Level 1 is filled with vines and snapjaws. 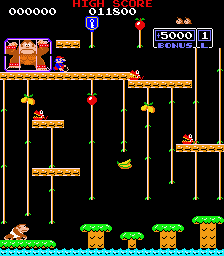 Players used to newer platformers may make a few unpleasant discoveries here. Vines are your main way of moving up and down, but you cannot climb up (or down) through a platform, even though it looks like the vines pass right through them. You can transfer from vine to vine, but only if they are within Junior’s armspan length; you can’t jump while climbing. And one important thing learned very quickly is that Junior ascends faster when gripping a vine in each hand, but descends faster when only gripping one.

The snapjaws are the only threat here, and come in two varieties; red snapjaws that patrol their turf, climbing up and down vines as they please (they can pass through floors, unlike you), and blue snapjaws which Mario periodically releases, who seek out a random vine at the top of the screen and ride it down all the way to the bottom.

Level 2 gave me the most problems out of all the stages in the game.

That long chain hanging from the right edge of Mario’s platform is the killer section here. Getting there involves some precise jumping, and the odd controls can get in the way, but at least there’s no randomness involved. The buzzards will also sometimes drop eggs on one of the platforms, but it’s not hard to avoid them. The springboard can serve as a shortcut past all that if you press the jump button at just the right moment when landing on it, but I couldn’t do it reliably.

To pass from one chain hanging from the side of that pit to the other, you must not collide with the buzzards while they are diving through it, and they do constantly, at varying altitudes. Fortunately, there’s a simple pattern – every third buzzard only dives to the highest altitude, letting you pass safely below it or above the other two which dive rather low. Unfortunately, when you ascend to the chains, the buzzards will break this pattern – I believe what happens is that one random buzzard will override its predetermined diving altitude and dive down to your level instead, and once this happens, the standard pattern will resume, letting you slip by with relative ease. Subsequent loops don’t seem to do this, making it even more of a crapshoot.

Level 3 gives you a chance to score some big points, but it’s risky.

The large number of sparks and Junior’s stiff jumping controls make this a deadly stage, but at the same time, it feels more down to skill and awareness over luck, as they move in mostly deterministic patterns. Red sparks circle around the platforms, blue sparks drop a level when they reach bare wires. Only on the platform directly below Mario do things start to become random, as there are multiple bare wire segments directly above, and Mario releases them at irregular intervals. Even before that, failing to keep track of all of the sparks can kill you, as you can easily jump over one spark only for Junior to slowly land right into the path of another. 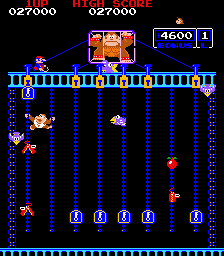 You’ve got to push all of the keys all the way up the chains. The birds fly in a zig-zagging pattern from top to bottom, while the snapjaws climb up and down the chains, transferring to another when they reach the top. The birds are the real problem, especially near the edges, as that’s where they dive and you can’t easily predict where they’ll dive to or react. Therefore, I prefer to go for the edge keys first, before the place is swarming with birds. It will be by the time you go for the center keys, and the snapjaws tend to congregate on those chains, but it’s possible to weave through the birds’ zig-zagging patterns when you aren’t near the edges, and you can’t get bitten by a snapjaw if you aren’t touching its chain. Coming to grips with Junior’s somewhat laggy climbing controls is key; the enemies move much faster than you, but they move predictably.

Rescue DK, and Mario gets a well-deserved roundhouse to the face. 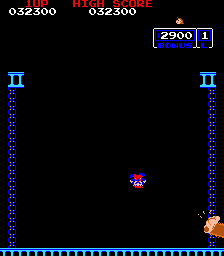 Then it repeats, but I couldn’t ever manage to finish a second loop. My best attempt ended on the spark stage.

GAB rating: Above Average. It’s more Donkey Kong, and that’s not a bad thing, but the stiffness and other dated feeling platformer aspects feel even more pronounced than they did the first time around, resulting in just as much cheap-feeling death as the randomly-dropping barrels in DK did. Still, level design is overall cleverer and more vertical than the first game’s, the vine-climbing mechanic is a timeless staple of the genre, and I appreciate the subtle complexity of its scoring system, even if going for the killscreen seems like a fruitless endeavor.
Email ThisBlogThis!Share to TwitterShare to FacebookShare to Pinterest
Labels: Nintendo R&D1