The next whale is Galaxian, Namco’s first big success in the arcades. Prior to that was a trilogy of sorts, Gee Bee, Bomb Bee, and Cutie Q. I’ll be taking a look at the first of them, which is considered to be Namco’s first internally developed video game, designed by Toru Iwatani who later designed Pac-Man.

From the poster, you might think this is an early mascot game, right? Nope. It’s a video pinball game with elements of Breakout. Or maybe it’s a Breakout clone with pinball elements. Either way, the bee mascot is conspicuously absent, and there isn’t a thread of original gameplay to be seen here.

This is certainly the easiest arcade game I’ve played yet, in terms of prolonging the playtime. As with most other arcade games of the era, there is no victory condition, and your only goal is to play for as long as your skill permits and get a high score. Two of my three balls were lost simply because my attention lapsed from boredom.

The ball moves a lot more slowly than in Breakout, the paddle is larger, and there are two of them, separating the playfield into two zones. There’s even a spinner mechanism that slows the ball down for a few bounces if you direct the ball through it. There are also two pinball drain outlanes in the lower zone that the ball might fall down into and immediately end the round, but I didn’t have much trouble keeping the ball in the upper zone for most of the playtime.

The upper zone is also where most of the action is; the bumpers, the bricks, and the slowdown wheel are all there. Clearing a set of bricks in the upper zone “upgrades” one of the pinball features to award ten times as many points, and also gives a 1000 point bonus. Clearing the left or right set of bricks will also create a single safety brick in the corresponding outlane, saving your ball from a single drain. Any cleared sets of upper zone bricks will be reset when the ball hits the lower zone paddle.

The lower zone features five rollover targets spelling NAMCO which will double your bonus if you light them all at the same time, but controlling the ball well enough to hit the targets is tricky, and puts the ball at risk of falling into the outlane drains. There are also two ramps each containing a single column of bricks. Clearing one of these columns and then hitting the safety brick in the outlane below it awards you a free ball, but getting the ball up into these ramps is nearly impossible. I found the lower zone not really worth it, too much risk for not enough reward.

An interesting technical detail is the use of color. Like so many other arcade games of the era, the screen is black & white, and fixed regions of the screen are covered with a colored cellophane overlay to create the appearance of color. Unusually, the internal graphics can produce gray in addition to white, which when combined with the cellophane overlay, allows for objects to change color, such as the spinner which changes from green to bright yellow when it lights up. This isn’t quite the first arcade game I’ve seen that allows for greyscale graphics (Atari had several), but it is the first to my knowledge to simulate color with the combination of greyscale and overlays, and this is the most colorful game on a black & white monitor yet.

How was Namco’s first real video game? Kind of boring. Objectively, there’s more interesting stuff on the board than in Super Breakout, but it’s slow, and there’s no satisfying “breakout” moment. 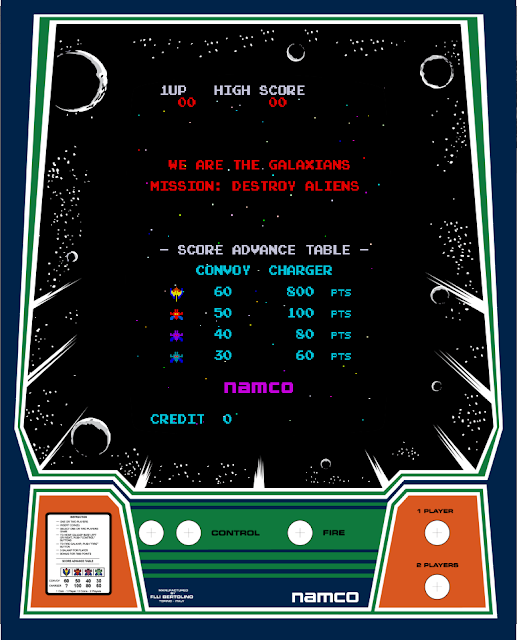 Galaxian, at first glance, looks like a clone of Space Invaders. And it isn’t far removed from the formula; a phalanx of aliens fills the upper half of the screen, pacing the width of it, and you control a slow horizontal-moving space ship at the bottom that can fire upward, one shot at a time. Annihilate the invaders to pass the level, and do it all over again, until you can’t any more.

The most immediately clear difference is that Galaxian is a lot more colorful. In fact, this is the first game of any kind I’ve looked at that really uses color video without serious limitations. Space Invaders, like most arcade games before it, used a black & white monitor, and had rows of cellophane to provide a color to each region of the screen, and you could see this in effect as your laser moved upward to the top of the screen, changing its color whenever passing through a new region. Some of the earliest Atari arcade games had color monitors, but their use of color was limited to one color per object, as was also the case with most Atari VCS games. Here, the Galaxians are multi-color sprites, which swoop around the screen freely without any sort of color clashing, and the background itself is filled with a colorful scrolling starfield.

The next obvious difference is that the Galaxians do not advance downward, nor do they shoot at you from their rank and file, but instead break off from the phalanx in groups and dive-bomb you, firing clusters of lasers and sometimes kamikazeing your ship. This puts less pressure on you to be efficient, and encourages focusing on precision aiming, but it’s still dangerous to dawdle, as the longer a round goes on, the more chances there are for the Galaxians to catch you in a deadly pincer attack or to force you into a corner.

In my best playthrough, I made it to the fifth round before losing my final Galaxip. Although there are no shields to hide behind or punch through, there is still plenty of strategic decision making involved. For instance, the Galaxians do not attack at all for the first few seconds, and also will cease fire for a few seconds more whenever you destroy a flagship. There are a number of possible strategies already.

Attacking Galaxians as they dive-bomb you is encouraged in a number of ways. Most directly, the point values are doubled. Hitting them mid-dive may be easier or harder; easier because they’ll be closer, but possibly harder if their horizontal swoop is fast enough. Because they are closer, a correctly aimed shot will hit them in less time, and you can fire again that much sooner. But this is also risky, as they often flank you, and going out of your way to line up a shot can wind up getting you trapped or caught off-guard by another attack formation. The ultimate challenge is the flagship formations, which always attack with two red escorts if they are alive and bombard you heavily. Taking out both escorts and then shooting the flagship before it completes its dive is worth a combined 1,000 points, but only if done in that order and all during the same dive. For comparison, a solo flagship is only worth 120.

Galaxian’s pretty good! Comparisons to Space Invaders are unavoidable, but it’s an iterative improvement. It’s a bit slow paced compared to later games, but the strategy and precision involved makes it satisfyingly challenging. I enjoyed the sound and visuals, and found the skill bonus from shooting the flagship formations to be a lot more interesting than shooting Space Invaders’ UFO.
Email ThisBlogThis!Share to TwitterShare to FacebookShare to Pinterest
Labels: Namco