Download a copy of the Polo ROM and manual here:
http://www.atarimania.com/game-atari-2600-vcs-polo_14046.html

The next whale, 3-D Tic-Tac-Toe, was not the first game by its developer and programmer Carol Shaw. Her first, also developed for Atari, was never officially released, but was dumped and distributed in 2002 by hobbyists with Shaw’s permission.

As with other Atari games, there are a multitude of game modes, 24 in total, each representing a combination of gameplay options.


As with some other Atari VCS games, the combinations are fairly comprehensive. Modes 1-8 feature ball rebound and one horse per team. Modes 9-16 have no ball rebound; instead the ball warps to the other side of the screen when hitting a goal edge or boundary and continues its trajectory. Modes 17-24 feature two horses per team. Each set of eight games covers every possible combination of three binary options; 1 player or 2 player, slow ball or fast ball, large goal or small goal.

There was an issue of particular interest to me. Take a look at this screenshot: 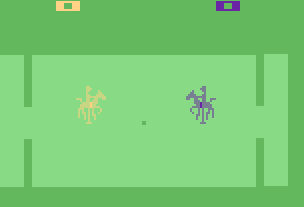 There are two horses in this screenshot. Can you see both of them? If so, either you aren’t colorblind, or your monitor is better than my laptop screen. I am colorblind, and on my laptop, I can’t see the horse on the left at all, even in motion, and I can barely make out its differently-colored saddle.

It’s been awhile, but I had another session with “R” to explore the game modes, with focus on the two player modes, and I played the solo modes by myself later.


On first glance, this looks like Pong blended with air hockey. The button isn’t used; the riders are stuck in a looping four-frame animation of swinging their mallets. In an unexpected but welcome bit of attention to detail, the riders backswing when facing their opponent’s goals, and frontswing when facing away, ensuring they always hit the ball in the direction of the correct goal.

To hit the ball, it must come in contact with the mallet’s head, and only during the three active frames of the swinging animation. Hitting it with the downswing hits it at a downward angle, the upswing hits it at an upward angle, and the transition frame between them hits it straight ahead. Hitting with the downward swing is difficult, because the mallet normally strikes the ground at the horse’s hind legs during its downswing frame. The horses also have a subtle element of inertia to their movement, and the ball travels faster if the horse is moving when you hit it.


The AI plays rather competently, which is unusual for an Atari game of this era; you were lucky if your game had any AI at all. Its strategy isn’t very sophisticated, but it makes up for it with computer precision in its timing and aiming. The AI’s horse slows down to a crawl when it is ahead in the score, giving you a chance to catch up. Because of this built-in handicap, it only beat me by one point.

I kept ricocheting the ball into my own goal. After a few, R yelled “Luigi wins by doing absolutely nothing!”

This pretty much characterized the match. I scored most of the goals, and lost by a lot.

With a bit of practice against the AI, I was able to cope with the speed. The AI doesn’t play quite as well with a fast ball, and seems to have trouble predicting where the ball will go. I had no trouble beating it by multiple points.


Smaller goals mean defense is easier, and the scores are lower, even when playing with a fast ball.

The slow ball mode still felt more skill based, and the fast ball mode felt more luck based. R liked how the pitch of the bounce sound got higher with each rebound.

There’s no rebound, and the only way the ball can change direction is if the opposing player hits it. It seemed advantageous to go on the offensive, which I put to the test in mode 12, featuring a fast ball and wrap-around.


R tried to play defensively, like he did in mode 4. Big mistake.


The AI really doesn’t understand the wrap-around mechanic, and always chases after the ball instead of trying to intercept it. Beating it was easy. It fared a bit better in mode 11 with the fast ball, but only a little.


These modes feature 2-horse teams spaced evenly apart horizontally, so that each can cover half of the playing field.


With two riders, this felt the most strategic out of all of the game modes. The fast variants still felt like it traded skill for luck.

The AI, once again, doesn’t play very well with doubles.

Overall, I was pleasantly surprised by this game. It’s not the best VCS game I played, but it’s as good as flagship title Combat, and has a learning curve and enough depth to make it interesting to players who are completely sick of Pong. Our favorite game modes were 2 and 16, Polo singles and doubles respectively, with the slow ball and wide mouth goals.

One thing I wish was different, was that the button could have been used to swing the mallet instead of having the riders perpetually spin them around in circles in that rather silly looking animation loop.

I’m sure there’s a good reason why Shaw did it her way, and manual mallet control might have raised the learning curve more, but mastering it would make us feel more in control, and would add more depth to the game.

That and I also wish the color scheme was different.
Email ThisBlogThis!Share to TwitterShare to FacebookShare to Pinterest
Labels: Atari