Game 42: Video Pinball and the road to Asteroids

The next whale goes back to Atari with their smash hit Asteroids, but there are some milestones along the way that I want to try out first.

Asteroids was directly influenced by a previous Atari arcade game, Lunar Lander (no relation to the Atari VCS game by the same name), for its vector graphics, physics, and controls. Wikipedia states that it was also influenced by Space Invaders, Computer Space, and SpaceWar, which I already played. Atari’s Lunar Lander is considered to be the epitome of its genre, which first existed in 1969 as Lunar and had its first graphical iteration in 1973 as Moonlander.

Asteroids was conceived and developed by Atari employees Ed Logg and Lyle Rains. Rains’ first design credit was Atari’s Jet Fighter, which I played already, and Logg’s first was Atari’s Video Pinball, which I haven’t.

And so, a slightly tangled roadmap to Asteroids: 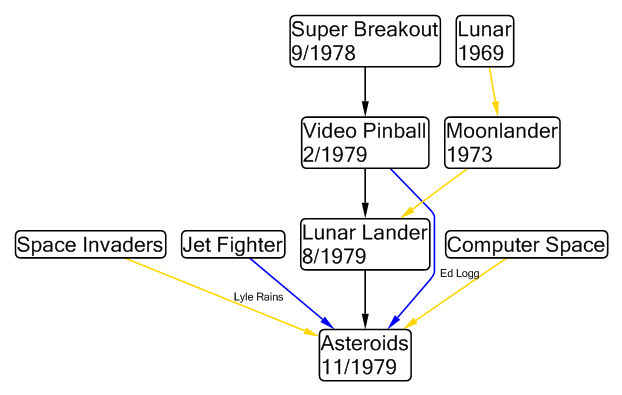 I believe Wikipedia to be incorrect here. From the looks of things, the dedicated console is a set of Breakout-like games with only the barest trappings of pinball present in a handful of them. The arcade and VCS games look more like what the title suggests; a video rendition of pinball. Only the arcade game credits Ed Logg with a design role, so it’s the one I will be playing here.

This does a pretty impressive job of simulating pinball physics, if nothing else. Gravity feels convincing in a way that nothing before it really pulled off, and the flipper action feels satisfyingly forceful. But it’s not that much fun to play. I always found the electromechanical era of pinball to be a bit boring, and the disco-themed table design feels bog-standard for the era, doing nothing to take advantage of the inherently solid state nature of the hardware except for having simpler maintenance, and doing nothing to distinguish itself from any number of real tables out there, which would have been more fun to play just from having actual moving parts that you can see and feel. The nudge function didn’t even seem to do anything, though I can’t tell if it’s because of an emulation issue or not.
Email ThisBlogThis!Share to TwitterShare to FacebookShare to Pinterest
Labels: Atari