This arcade game is odd. You’re flying through space in a first person bridge perspective, there are USS Enterprises everywhere, and also a few other copyright infringing ships appearing every now and then, which you’re supposed to shoot. You can steer somewhat, but it’s more for aiming than navigation. Controls are complicated for a 1977 arcade game, but map well to a controller.

You score 50 points each time you destroy one of the Enterprises, which are slow moving and defenseless. Other targets include giant worms that turn into more Enterprises when you shoot them, and some Klingon D7s and flying saucers which are harder to hit and tend to crash into you. Planetoids pop up constantly, which can be avoided easily by steering around them. Crashing doesn’t seem to inflict any real damage on you, but wastes time. A limited supply of torpedoes clear the screen instantly, but they can’t be fired during the phaser cooldown, which I found annoying since usually the reason I want to clear the screen is because I fired phasers at a fast moving target and missed. You can switch the ship’s speed from fast to slow, but I’m not really sure what the point of that is. It doesn’t seem to make the fast moving targets any easier to hit. Eventually the fuel counter hits zero, and then the game ends and declares “YOU HAVE SAVED THE FEDERATION!” Hooray, I guess.

For curiosity’s sake, I replayed and performed horribly on purpose, never firing, and crashing as often as possible. It seems to be impossible to scuttle the ship. Fuel ran out as it did before, and then the game declared “YOU HAVE LOST EVERYTHING.” I guess that makes this a “winnable” game, but losing practically took more effort.


Star Ship is an Atari VCS port of Starship 1, and was programmed by Bob Whitehead. It features 17 modes, split across three game types. 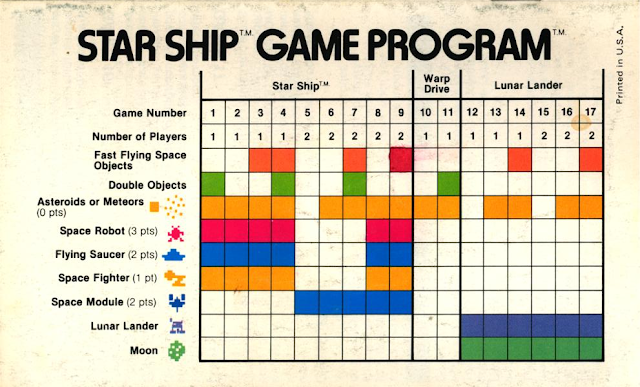 
Modes 1-4 are singleplayer like the arcade game. It’s a very scaled down port, with no more than two objects on screen at once, a fixed parallax effect on the starfield (meaning that when you steer, the stars’ relative movements are no visual indication of it), no torpedoes, no throttle, and crudely drawn and scaled sprites representing the targets and space debris.

Mode 2 reduces the number of objects on screen from 2 to 1, making for a very boring game where if the object is a target, you easily steer and shoot it, and if it’s an asteroid, you do nothing until it passes.

Mode 3 has fast objects that can crash into you, but like mode 2, there is only one at a time. It’s still pretty boring, and more frustrating than the first two modes thanks to spotty collision detection. Mode 4 has two fast-moving objects at once, which makes it the closest this cartridge comes to resembling Starship 1, but poor collision detection is still a big problem.

Modes 5-9 are two player competitive, where one player controls the star ship as normal, and the other controls the movement of a space module, which is a target for the star ship to destroy. Each game has two rounds, and the players switch roles in the second round. The goal is to score more points than your opponent does during your round as the gunner. The targeted player’s only real tactic is to avoid the cross-hairs, but moves so slowly that this can’t be delayed very long. The target has a cloaking device which can be used to fake out the gunner, but has a long cooldown.

In modes 5-7, the space module is the only target which the star ship may shoot. Modes 6 & 7 add slow and fast moving asteroids which both players should avoid (or trick the other into colliding with), and modes 8 & 9 add additional CPU-controlled targets for the gunner to shoot for more points and to avoid crashing into. Mode 9 comes the closest to being interesting, with faster moving targets that present a threat to the unwary gunner and a tactical challenge of whether to shoot them for bonus points or to avoid them and go for the player-controlled target.


Singleplayer only, with no shooting, just a bunch of asteroids that you need to avoid crashing into. The button now accelerates instead of firing, so you can cover more distance, but this makes it harder to avoid the asteroids. I didn’t see much reason to ever let go of the accelerator; by the time it becomes evident that an asteroid is headed for your ship, it seems that letting up won’t do you any good, so I would just eat the asteroid and accept the lost point. Mode 10 has one asteroid at a time, mode 11 has two.


This actually predates the arcade game Lunar Lander, but doesn’t seem to have anything to it. You move a space ship around the screen and try to land on the moon, but it looks more like you’re blasting the moon with your landing thrusters. The moon wobbles around the screen randomly, never straying far from its starting point thanks to Gaussian distribution.

Modes 12-14 are singleplayer, and you try to land as much as possible in the time limit. Modes 13 and 14 have slow and fast moving asteroids which cost points if you crash into them, and aren’t especially hard to avoid.

Modes 15-17 are two player competitive. One player controls the moon and tries to move it out of the way of the space ship. Really. As in Star Ship, games have two rounds, and the players reverse roles after each round. The moon moves so slowly that there’s nothing the player controlling it can do except to slightly delay the lander’s landing. How far away the moon randomly spawns affects the score more than the controlling player’s skill in avoidance. Edge-wrapping can be used to disorient the other player, but this isn’t a sustainable tactic. Modes 16 and 17 have the slow and fast moving asteroids, and add some semblance of strategy, but just barely.

All three of these games suck. Lunar Lander is so stupid that it’s not even worth the two paragraphs of analysis I gave it. Star Ship & Warp Drive make more sense in theory, but are duller than Star Trek: The Motion Picture, and the pseudo-3D effect is so bad that I can’t even muster the charity to call it “good for the VCS.” Next!
Email ThisBlogThis!Share to TwitterShare to FacebookShare to Pinterest
Labels: Atari