Released some time in 1978, the year after the Atari VCS’s launch. Outlaw, the first game by David Crane, is officially a port of Atari’s lost arcade game Outlaw. In fact, it plays nothing like its namesake – the old Atari game was a light gun shooter – and instead is an unauthorized port of Midway’s Gun Fight (itself an authorized remake of Taito’s Western Gun).

Crane’s Outlaw has 16 modes which can be pigeonholed somewhat awkwardly into four game types, which I group as Cactus, Stage Coach, Wall, and Target Shoot. 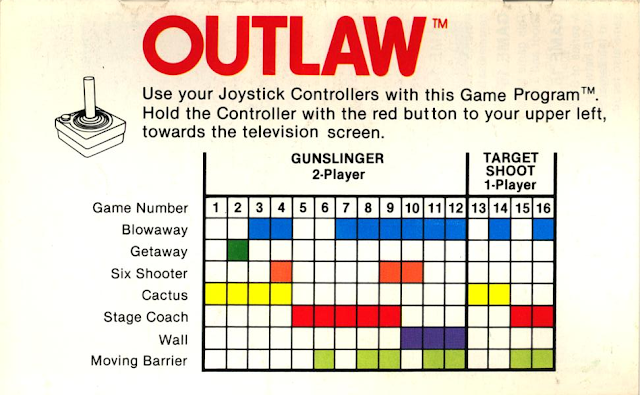 A misprint here, modes 11 and 12 erroneously appear to be identical, when in fact mode 12 has Six Shooter rules.

The most basic mode. As with Gun Fight, two cowboys, one on each side of the screen, duel with pistols that fire ricocheting bullets. But it’s already apparent that there are some major differences, some general, some specific to this mode.

Gun Fight featured two joysticks per player, one for moving the cowboy, and one for aiming the gun. Here, as with most VCS games, you play with one joystick and one button. To aim, you hold the button, then tilt the joystick up or down if you wish to fire at a 45 degree angle or keep it centered to fire straight ahead, and then release the joystick to fire. This scheme is admittedly more complicated than other VCS games, where joystick directions did not have context-sensitive meanings.

There’s only one cactus barrier, but it’s pretty big, and it’s indestructible. That combined with the smaller size of the playfield means there aren’t many positions or opportunities to hit your opponent, and every kill in this game involved ricocheting bullets at an angle. Standing very close to the cactus prevents you from being hit, but you also can’t hit your opponent from there.

You can’t move while shooting. You can’t even move while the bullet you shot is in motion – you have to wait until it hits the cactus, or your opponent, or the side of the screen, which gives your opponent a chance to take a potshot at you.

There’s no break in between rounds, and no resetting the playfield or the cowboy’s positions. After killing your opponent once, you might kill them again if you fire again immediately and they don’t move out of the way.

Bullets and movement are both slower than in Gun Fight.

Bullets are slow, but so is movement. Double kills are also possible with the default handicap settings, and happened a lot thanks to the slow movement and other factors.

The game ends after 10 kills, rather than being on a timer. This combined with the lack of downtime in between rounds made for a very quick game.

Like mode 1, except that you can move immediately after shooting. This caused points to be more drawn out, but unexpectedly, this also caused double kills to be much more common.

Under “blowaway” rules, the obstacle is gradually chipped away as it is shot to pieces. Damage to the obstacle lasts the entire game; the cactus does not get repaired in between points as it did in Gun Fight. Once the cactus was mostly gone, the game became quite short.

With Six Shooter rules, each cowboy has a limit of six shots in the revolver, as in Gun Fight. Whoever runs out first may not fire again until the other runs out as well. Unlike Gun Fight, when both cowboys run out of ammo, they both instantly reload. Also unlike Gun Fight, they do not reload in between points.

This set of rules gave a possible tactic of goading your opponent into wasting bullets, but this didn’t seem to happen much. With blowaway rules as well, this was still very short game after cactus was gone, it just took longer before that happened.

More like a covered wagon, actually. It’s like mode 1, except the stagecoach obstacle is even bigger, and limits your angles of attack even more significantly than the cactus did.

The stagecoach now moves from the bottom of the screen to the top, and wraps around indefinitely. This was more fun than the previous mode, with more tactics possible. Shooting straight was much more common, although there were a few kills with tricky angled ricochet shots. Hitting your opponent without trading shots was tricky, because the moving stagecoach gives a very small window of opportunity for being able to hit your opponent, and the window mostly works both ways.

With a destructible stagecoach, there was a potential for strategy in building asymmetrical cover, or in angling your shots to ruin your opponents’ cover. Here we noticed that if you stand close to the obstacle, you can fire rapidly and destroy it pretty quickly.

Now the stagecoach moves and is destructible. But this was maybe not all that different from the moving stagecoach, because by the end of the game, even the perforated stagecoach was still a big barrier.

The wrap-around has some interesting metaphysical implications. Is the stagecoach teleporting from the top of the screen to the bottom, as seems to be the case in other Atari games? Or is there an infinite supply of stagecoaches below the screen, all moving upward and past the length of the screen one at a time? If the latter, then why does blowing holes in one stagecoach cause holes to appear in the same places of all subsequent stagecoaches?

Six-shooter rules proved to be a great strategic addition, when the moving destructible stagecoach by itself wasn’t. You had to make shots count, or could play defensively until your opponent runs out, and then play aggressively or be tricky.

A destructible wall completely seals you off from your opponent until you’ve punctured it enough. With six-shooter rules, getting through the wall took a long time. Both of us had to work together to break through the wall, before we could start shooting each other.

The wall now moves from the bottom of the screen to the top, wrapping around. This isn’t at all apparent until you start destroying the wall, which is a lot easier in this mode thanks to having unlimited shots. Even after the wall is full of holes, the pieces left behind move pretty fast, and it’s easy for them to block your shots.

This mode felt a lot more strategic than either wall game before it. The limited shots made for a slowgame, with a lot of tension when one player ran out of bullets first.


Finally, the singleplayer modes. In all modes, a target on the right side of the screen moves up and down, and your goal is to hit it 10 times. Since the target moves and you have very little aiming precision, it feels more like a test of timing than of accuracy.

Mode 13 puts a cactus in your way. The best strategy seemed to just be to stand in place and hit the moving target on each pass.

Mode 14 makes the cactus destructible. I found it easy to just blast through the top of it and then walk over to the target and shoot it repeatedly. The hard part is optimizing your rate of fire. Each time you hit the target, there’s a brief cooldown before you’re allowed to shoot again, and the game gives no clear indication when this cooldown is about to end, forcing you to predict it in order to be as efficient as possible.

That said, my best attempt at mode 13 was slightly faster, so maybe shooting through the cactus isn’t the best strategy here.

Mode 15 puts a moving stagecoach in your way. With a moving target and a moving obstacle, this was the hardest target mode.

Mode 16 has a moving destructible stagecoach. Blasting through took a while, but after that it played exactly like mode 14.

Overall, this was a pretty good game, and with the many options it felt like an improvement over Gun Fight. The arena is smaller and simpler, and without analog aiming controls it felt stiff and a bit less reliant on skill, but we enjoyed the faster pace and the interesting strategies involved in several of the gameplay modes, and other than the target practice modes which were kind of lame, all of the modes were enjoyable and played distinctly from one another.
Email ThisBlogThis!Share to TwitterShare to FacebookShare to Pinterest
Labels: Atari