After Breakout, the next whale is Combat, the original pack-in title for Atari’s seminal console released in September 1977. Claiming to be a program of 27 video games, all are really just variants of Atari’s earlier arcade games Tank and Jet Fighter. These titles even appear in the list of games, along with Pong, whose bouncy mechanics play a role in some of the Tank variations.

In between Breakout and Combat, the only Atari game to receive any significant retrospective exposure (by my Mobygames metric) is Night Driver, a racing game made by Atari’s subsidiary Cyan Engineering in 1976. It’s long been thought to be the first racing with a 3D perspective. Wikipedia long described it as “the original first-person racing game,” and only by January 2011 would someone change it to “one of the earliest first-person racing games.” By July 2013, the page finally credited its inspiration Nürburgring 1, with citations. 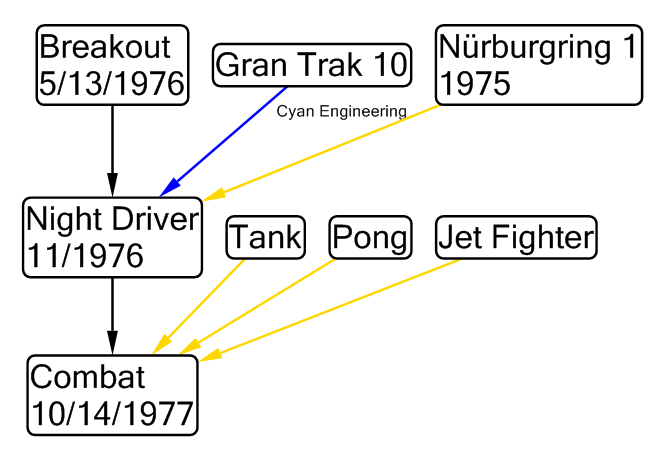 
Like so many games of the 70’s, information on this game is scarce and sketchy. Another game with no CPU, with a whopping 28 circuit boards and painstakingly manufactured at one unit per week, it’s likely that this will never be emulated. It’s not even a sure thing that there are any operational units left in the world.

If you’ve played Night Driver, I’m sure that flyer looks familiar. Programmer Dave Shepperd claims to have been inspired by a photograph of some 3D racing game that might have been German. It’s also been reported that the inspiration was Night Racer, which had been directly inspired by Nürburgring 1 when its creator visited Düsseldorf. In either case, Nürburgring 1 was certainly a progenitor to Night Driver.

I really can’t say much about how it might have played that can’t be gleaned from the flyer. The screenshot looks like a mockup – nothing at the time, or in years since, could show fonts or lines on a CRT with such clarity, but it seems reasonable that the final product may have had all of the visual elements seen there. The cabinet shows a driving wheel, pedals, and brakes, but no stick shift. The screenshot shows a dashboard, something absent from Night Driver, with discernible speedometer, odometer, and fields marked “Ziel” and “Fehler” – “aim” and “error.” To the right of that appears to be a timer, and something indiscernible further to the right of it.

My attempt to translate the blurb:

Nürburgring/1 sets new standards for video machines. It is not a game with remote controlled miniatures, but rather an up-close racing experience from the driver's view. This is the first time that a coin-op comes close to the test devices of the automotive and oil companies, the driving simulator with a lifelike perspective streetscape.


A later flyer from 1979 shows a redesigned cabinet without brakes alongside a motorbike variant, and more detail on how the game played.


The blurb on the first page is just a slightly abbreviated version of the original flyer, but the second page reveals some tangible gameplay detail, even with my clumsy attempt to translate it.

Nürburgring puts the driver in a veritable speed rush. It becomes deceptively realistic on a varied simulated racetrack which excites motorsport fans: 4-speed automatic, an engine noise with all tone varieties, the option to cut corners and take the ideal line so that the car does not break out, the squealing noise of drifting tires.

Speedometer, kilometer counter, timer, error counter. Incorruptible, the electronics notes each wrong reaction, challenges the competition, penalizes crashes with loss of time, rewards good driving with a free ride. A special automatic shutdown considers the drivers' skill. The slow drive of beginners is canceled by the clock after 90 seconds. The fast drive of the more advanced ends with the finish line. The viewer can call splits and follow curves and unexpectedly becomes a co-driver.

Nürburgring are highly complex fully electronic devices developed from scientific simulation technology. They are absolutely maintenance-free due to the exclusive use of long lasting components. Steering and gas are of the highest quality and robustness. The circuit design meets the highest requirements regarding safety and ease of repair. 28 partly identical plug-in cards are easily accessible and arranged according to functional groups. If an error occurs, it can be remedied in two steps by changing the relevant card.

Our service will satisfy you.

Nürburgring devices enjoy the same popularity among youth and adults. Based on their tasteful presentation, they are not only suitable for gambling halls, but also for hotels, restaurants, department stores, dignified reception halls and waiting rooms.

Further recommended reading, but prepare for a tangled mess of facts, anecdotes, hazy memories, and speculation, as with any literature on an obscure and unplayable video game.


By uncertain means, to an uncertain degree, and with uncertain directness, Nürburgring 1 begat Night Driver, and it was released in 1976 to great commercial success. Unlike all of the previous Atari games mentioned so far, Night Driver is CPU based, and has been well emulated by MAME for ages. The display is a monochrome monitor that shows lines of white pylons on the side of the road zipping past you in first person to impressionistically depicting your speed and direction. A simple, static color image overlay of the car’s front adorns the center of the screen. At the top of the screen are a score display, your time remaining, and your fastest speed reached. A speedometer is inconspicuously absent.

Controls exposed by MAME include:

The strategy that worked best for me was to try to reach top gear as quickly as possible, and then stay at the top gear at all times, with the gas pedal down nearly for the whole duration. I would let up on the gas for a split second on straightaways just before entering turns, making sure to hold it again on entering the turn and keep it held down during and after the curves. With this technique, I never crashed, never lost control of the car, and never had to come down from top gear. But I also never reached a speed above 191, whereas in some previous attempts I exceeded 241 (just not for very long). I suspect this isn’t a winning strategy either, because my best attempt scored 314 points, seemingly miles away from the 350 points needed to “win.” I wonder how it’s even possible to score over 1000 points – do you have to just keep the gas pedal down without ever letting up, and steer with inhuman precision? I can believe that it’s possible to navigate the turns at speeds way above 191; the steering is very sensitive, and there’s no spinning out from oversteering at high speeds, but I’m certain I’ll never be good enough to do that consistently.

There were also some DIP switches that I didn’t mess around with much:

Lack of closure on some mysteries aside, Night Driver is a pretty impressive accomplishment, to manage a fast pseudo-3D racing perspective at a high frame on a primitive 70’s CPU that was considered entry level even at the time. I can’t say I had that much of a great time playing it, driving games were never my forte.

Before moving on, a quick detour into a counterpart by Midway.


Released by Midway in 1976 and reportedly a licensed clone of Night Racer by Micronetics, which in turn was inspired by Nürburgring 1. That’s the report anyway, but some things bug me about this explanation. Why would Micronetics license a clone, and not just outsource extra production of their own game? How much of a clone was 280 ZZZap anyway, considering that Night Racer was based on TTL circuits, and 280 ZZZap based on a CPU running software? Did it come before or after Night Driver? If Night Racer was also licensed to Atari, why did Midway and Atari accept non-exclusive license deals? And why does Dave Shepperd claim that all he was given to work with was a photograph of some racing game that might have been German?

In any event, what we have that can be seen with one’s own eyes is that there are two racing games playable in MAME with an awful lot of apparent similarity, including a release date of 1976. Everything else we know has been passed through the filter of historians.

Once again, this is a 3D perspective time trial racing game, with display as a monochrome monitor, with white pylons flying past you to simulate the sensation of speed. Scoring high enough in the allotted time awards bonus time to race. A dashboard at the bottom shows your speed, time, and score, and blue cellophane acts as a color overlay. Sound is not emulated.

For this game, controls exposed by MAME include:

In about 20 minutes of trying, I played a round where I hit the bonus time threshold, never crashed, hit the maximum speed multiple times, and finished with the highest rating of “champion.”

Compared to Night Driver, 280 ZZZap wins in the bells and whistles department. The dashboard is snazzier and more useful than Night Driver’s cardboard cutout hood decal, the guy waving a flag at the beginning is a neat visual touch, the gas pedal is analog instead of digital, the endgame rates your performance, and there's actually a speedometer here. But Night Driver has the more engaging driving engine. 280 ZZZap just doesn’t let you do much except navigate turns by steering hard and slowing down if you have to. The stick shift only has two positions, and the only times I ever had it set it to the low position were for the first few seconds after starting or crashing. The course does not twist and turn as Night Driver's do, and it’s almost impossible to oversteer. In short, 280 ZZZap is simplistic and too easy compared to Night Driver.

In the end, Night Driver is the only game in this family of arcade racers with any enduring popularity. It outperformed 280 ZZZap in the arcades and was ported to the 2600 console, while 280 ZZZap only got ported to the forgotten Bally Astrocade. The progenitors Nürburgring 1 and Night Racer languish in obscurity, possibly never to be played again.
Email ThisBlogThis!Share to TwitterShare to FacebookShare to Pinterest
Labels: Atari, Midway