Game 2: Computer Space and the road to Breakout

I realize that the combined chart as is, is basically unreadable. So I made it "breakout" into two subcharts : 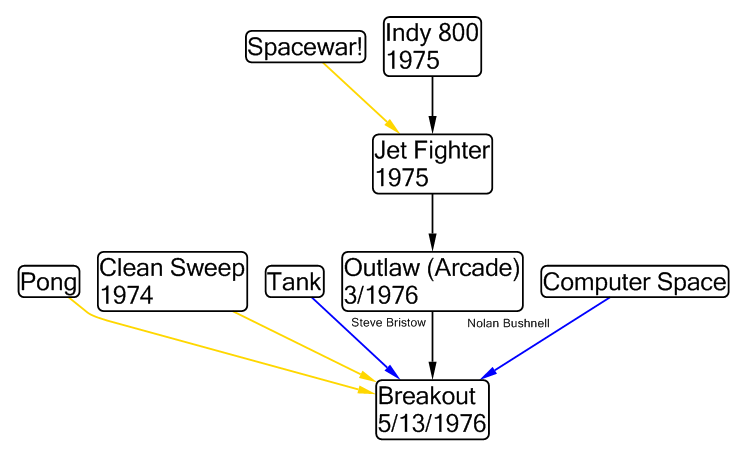 At the top of the chart we have Spacewar as a strong influence on Computer Space, which in turn is the first game by Atari (technically called Syzygy Engineering at the time and not yet incorporated, but these are pedantic details), and widely considered to be the commercial video game ever.


To actually play Computer Space poses a problem. Arcade cabinets are rare, and there are currently no emulators capable of running it – the multiple circuit board design is hideously complicated. The best thing that seems to be available is a simulator hosted at Mass:Werk, a re-creation of the game in PDP-1 code, running on a similar PDP-1 emulator as their SpaceWar programs:

It needs to be noted, this is not an accurate reproduction by any means, but is meant to look, feel, and play similar. Many known differences are described on the webpage. With that in mind, I played it.


Unlike Spacewar, Computer Space is a single player game against the computer. But the similarities are obvious. You’re still piloting a space ship flying around 2D space on the computer screen, able to rotate, thrust, and fire missiles (no warping this time). Your ship still has momentum, but it’s a lot easier to change trajectory, or kill or reverse your forward momentum. With a much more forgiving set of controls, faster gameplay, and no gravity pull, navigating Computer Space is a cinch. The hard part is surviving. Two saucer ships move around the screen in some pattern, shooting in your direction, and they are very accurate shots, able to lead you if you’re moving. Getting too close to the saucers is suicide, as you need to change your trajectory FAST to avoid getting hit, and at medium to close ranges, this just isn’t possible to do in time! And unlike Spacewar, you shoot ONE missile at a time, and if it misses, it feels like an eternity before you can fire another.


But it didn’t take long before I discovered that if you rotate the ship when you have a missile in space, you steer the missile too. This made taking out the saucers pretty easy, just keep your distance, fire in their general direction, and steer the missile right in, which will usually hit before their missiles reach you. If you miss, dodge their fire, which shouldn’t be too difficult if you’re far enough, and then turn in their direction again and try again. It wasn’t long before I scored more points than the system could handle (the original game doesn’t know how to display a two-digit score, and this simulation accurately reflects that), and I kept winning extended play indefinitely. The original system would recognize this with a Hyperspace mode that inverts black and white on the screen, but the PDP-1 can’t do this, so it isn’t simulated.

A couple of other notes on the simulation:
Computer Space came out nine years after Spacewar, and eight years before Asteroids, and in some ways feels like a bridge between them. Spacewar has a punishing Newtonian physics model, Computer Space has a relaxed interpretation of it, and Asteroids even more so. Spacewar is you against another player, Computer Space is you against the UFOs, and Asteroids is you trying to survive as long as possible (with the UFOs returning every now and then to take pot shots at you). All three games have the same rotation and thrust control scheme, missile shooting, and that mechanic where the space wraps around on the edge of the screen.

On March 2019, eight months after posting this, I had a chance to visit Funspot, NH, which features 200+ classic arcade games, including Computer Space. 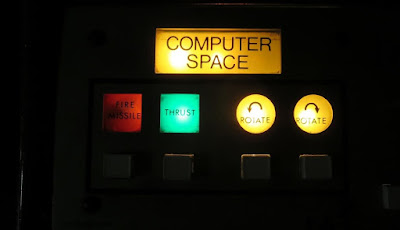 The controls, which look really cool in the dark, consist of four buttons, not arranged very ergonomically, and are difficult to press, which may be due to the machine’s age. They move easily enough, but unless you push them right in the center and directly down, they’ll fail to make contact and won’t register.

The playfield is vertically larger than the screen. This makes gameplay confusing when you or the UFOs are near the top or bottom; anything close to those edges gets cut off from view.

Like in the simulator, you can only fire one missile at a time. Unlike the simulator, the missile does not disappear when it hits a UFO, which means you always have to wait for it to reach its maximum distance before firing the next. All too often I would score a hit, and then be unable to fire a follow-up shot to the next UFO when I wanted to. The missile range seems to be shorter too, and a lack of trails makes it hard to spot.

Scoring more than 9 points in the allotted time wasn’t hard at all, but the score counter glitches out when you do.

Hyperspace mode doesn’t seem to work as it should. Supposedly, if time runs out when you are ahead in score, you’re awarded bonus time and the screen colors invert during this period. I had no trouble meeting this requirement, but instead of seeing inverted colors, the screen’s white pixels just became finer and the score/time counter got rendered in a funny and illegible way.