Starting off the year 1980 is the Atari VCS version of Space Invaders. I’ve already done the original arcade version by Taito, but the Atari conversion qualifies as a whale of its own.

Like so many other Atari games, there are several gameplay modes. This time, it’s an incredible 112. 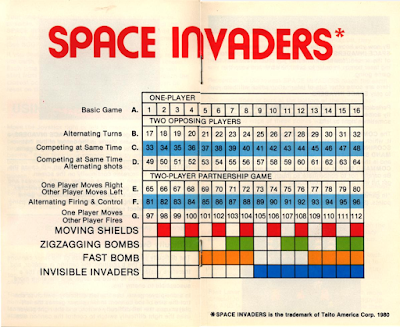 I did begin to try the 16 singleplayer variants by myself.

It’s Space Invaders, alright, just uglier. There are some tangible differences; the invaders only shoot one kind of projectile, and your own fire just passes through it, rather than negating or being blocked by it. And there are three shields instead of four. And the shields instantly vanish once the invaders descent far enough. The laser base can’t quite move all the way to the edges of the playfield, so there’s only a brief opportunity to shoot down the outer invader columns, which you'll need to take when you can.

Mode 1 was pretty easy, certainly easier than the arcade game. Starting in round five, the invaders start so low that you don’t get any shields. And from round six on, they begin one descent away from landing. At this point, you absolutely must eliminate the bottom row ASAP, which can be done pretty quickly albeit dangerously if you focus on the bottom row or two and keep moving from column to column. If an invader decides to shoot while you’re under it, then you’ll probably have no time to react and will just die. Once you have some breathing room, you can focus on eliminating the columns from the outside-in to slow down their descent.

I scored 10,000+ points pretty easily here, flipping the score counter. The game doesn’t change after round six, so theoretically I could play forever.

The shields move back and forth, which mainly just causes them to get in your way more, especially when it comes to shooting the UFOs. This is a moot on round four onward, because at this point you lose the shields anyway. It really just means it will take longer to flip the score, since the prime opportunity to score points by shooting UFOs is in the earlier rounds.

The invaders’ projectiles move left and right randomly as they descend. This mainly slows you down by forcing extra precaution, and kills you more often when you aren’t. It’s hard to predict where the projectiles will land, forcing you to stay farther away from them, or risk getting caught off-guard and blown up.

Space Invaders actually felt like a cover shooter in these modes. Normal shots had been easy enough to weave through, and it actually felt like a relief when the invaders got close enough to disable the shields, because they were no longer in my way. The zigzagging shots had the opposite effect; hard to dodge, and making me feel vulnerable once my shields went away. In addition, while moving shields just got in the way more in mode 2, here they helped a bit, as they blocked the zig-zagging shots more often.

Now Space Invaders gets hard, and I didn’t last long at all once I reached the third round. There’s just no time to react to low-flying invaders if they happen to shoot when you’re under them. Modes 7-8 have an especially deadly combination of fast-moving, zigzagging bombs.

I’m pretty sure this is a joke. I can’t even clear one round on mode 9. I didn’t bother with the rest of the modes here.

Later, I played some of the two-player modes with “B.” Modes 17-32 are just throwaway modes, featuring pointless alternating play.

The manual says these are competitive modes, but the only impetus for competition is the fact that you get separate score counters. You don’t even get separate life pools, and the game ends when a total of three laser bases have been destroyed regardless of the player who loses them, making competition even more pointless. We played as if it were cooperative, working together to try to repel the invaders with double the firepower.

The basic modes with slow and straight invader shots were pretty easy, unsurprisingly.

The modes with fast and/or wavy shots were really hard. Having double the firepower did NOT make up for being twice as likely to get hit.

Invisible mode, once again, got us with that last lousy invader slipping past our fire.

Modes 49-64 add a restriction that you and your “opponent” must alternate shots. You still have more damage potential than you would playing solo, because two laser bases means less moving around. But a missed shot has worse consequences, because neither of you may fire until your missed shot reaches the top of the screen.

You could also play these modes solo. A modern controller’s got more than enough buttons for two laser bases. I tried it too, using a d-pad and left bumper for the left base, and face buttons and right bumper for the right base. Conclusion: I’ve got enough fingers to play this way, but not enough coordination.

Scrolling through the list of game modes to get here is rather tedious. All of these modes grant two players partial control over a single laser base.

These modes were all as dumb as they sound. The first set of modes just got us killed, as often we’d both try to move in opposite directions to dodge a shot, and the base wouldn’t move at all. The second set isn’t very interesting, with half of your playtime spent waiting for your partner to fire. In the final set of modes, we were able to work more or less in harmony, but it was still pointless. I’d rather have had co-op modes with two laser bases, just like the competitive modes, only with shared points and lives.

Overall, I’m glad I played this port of the game, even if the mode count is ludicrously padded. The challenge of fast and wavy shots is novel, the invisible mode kind of stupid, and the entire set of “partnership” modes a waste of time, but the “competitive” modes played cooperatively are what really sold the package.
Email ThisBlogThis!Share to TwitterShare to FacebookShare to Pinterest
Labels: Atari, Taito